Aims at encouraging campaign planning and nurturing leaders of tomorrow 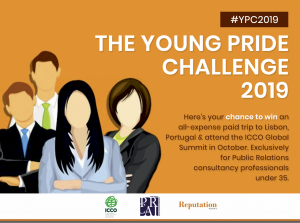 The Public Relations Consultants Association of India (PRCAI) and the International Communications Consultancy Organisation (ICCO) in partnership with Reputation Today, India’s only print magazine for communications professionals, are pleased to announce the Young Pride Challenge, which will see two young PR professionals flown to the ICCO Global Summit in Lisbon, Portugal.

The Young Pride Challenge has been set up to encourage campaign planning and bring to the fore young professionals who are the leaders of tomorrow. A team of two public relations consultancy professionals will respond to a brief which will be evaluated by a jury. The brief will be available on the Reputation Today website by noon on March 25th. The winners will be publicly announced at Influence Now Communication Conclave on 16th May and will be funded to travel to the summit.

To be eligible for the challenge both team members should be born on or after January 1st 1984 and should have valid passports. The contest opens on 25th March and the last date to submit the responses, without any fee, is 25th April. We will accept entries until April 30th for a fee of Rs 1000/- per entry. The jury will decide the winners by May 10th and the winners will be announced soon after. The two winners will have the opportunity to join PR and communications leaders from around the world at the ICCO Global Summit, which takes place in Lisbon, Portugal on 9th – 10th October.

The ICCO Global Summit is an annual conference featuring keynote presentations, insightful panels and advanced networking which focus around PR industry challenges and innovations. The theme for this year’s event is: Transformation ’19 – Talent and Technology driving the global PR Agenda.

The prize includes a round-trip flight ticket and visa costs supported by PRCAI, a two-day delegate pass to the ICCO Global Summit supported by ICCO and stay for upto three nights in Lisbon supported by Reputation Today and its partners including the School of Communications & Reputation (SCORE). The winners also get complimentary access to one edition of PRAXIS of their choice.

There is a list for 30 under 30 and a list for 40 under 40. Somewhere, those in between get missed out in gaining recognition.

35 is the age when most professionals are completing a decade of work experience and stepping into leadership roles.

The crux of Public Relations is case studies and campaigns which is not an aspect several professionals are familiar with. We want to bring the culture of solving a case back in vogue.

Hence the Young Pride Challenge and the ABC Prize. These are aimed at those in the vicinity of the ten-years experience mark. The prizes are also those that worthy communicators above this age bracket can afford with some planning and investment. We believe exposing three young professionals to international conferences is a great honour for them as well as for those aspiring to enter the profession and make a mark.

Seven out of the top ten most polluted cities in the world are in India. Current estimates suggest that air pollution causes one in every eight deaths in India, which is a total of 1.24 million deaths in a year. India racks up healthcare costs and productivity losses from pollution of as much as 8.5% of its GDP.

Providing clean air to breathe is now a national priority!

With this as background, devise a comprehensive PR strategy for an auto industry body to combat this issue which is still in its nascent stage but can become a potential crisis for the industry.