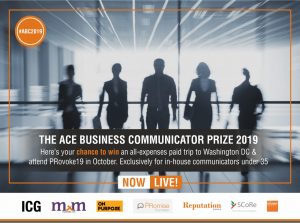 A consortium of organisations led by the Promise Foundation, is pleased to announce the revamped Ace Business Communicator Prize for young in-house professionals, which will see one young communications professional flown to PRovoke19, organised by The Holmes Report in Washington DC in October.

The ABC Prize was instituted to encourage young talent in communications. Professionals will individually respond to a brief on social change in a record time which will be evaluated by senior members of the ICG (Indian Communicators Group) as well as Arun Sudhaman of The Holmes Report and a representative of On Purpose Consulting. The brief is available at the end of this note. The winners will be publicly announced at INCC 2019 and will be funded to travel to PRovoke.

We do not have a winner this year.

To be eligible for the prize the individual should be born on or after January 1st 1984 and should have a valid passport. The contest opens on 25th March and the last date to submit the responses, without any fee, is 25th April. We will accept entries until April 30th for a fee of Rs 1000/- per entry. Entries should be submitted with a scanned copy of the passport. The response to the case should be sent from the official email ID, as a pdf, running not more than two pages, with file name ABC Prize 2019_First name_ Last name and the same to be mentioned in subject line as well and sent to team at reputationtoday dot in with copy to editor at reputationtoday dot in.

The jury will decide the winner by May 10th and the individual will be informed by May 16th in order to make visa and flight arrangements.

The winner will have the opportunity to join PR and communications leaders from around the world at PRovoke19, courtesy The Holmes Report. The annual summit takes place in Washington DC from 21 – 23 October, 2019.

The winner will write one exclusive article sharing his/her experience from the global event by November 15th. This will be published on the Reputation Today portal.

PRovoke19 is a high-level forum held annually, that aims to provoke senior practitioners around the critical issues facing the profession and the companies it serves. The summit attracts a diverse group of top-tier speakers and delegates from across the globe, including more than 60 brand side speakers in 2018 alone.

The prize worth Rs 1.5 lakh each in kind includes a round-trip economy flight ticket to Washington DC from an Indian metro and visa costs wherever applicable, supported by ICG and Reputation Today and its partners, a two-day delegate pass to PRovoke from The Holmes Report and stay for two nights in Washington DC supported by On Purpose Consulting and the School of Communications & Reputation (SCORE). The winner also gets an opportunity to be mentored by Seema Ahuja and Shravani Dang – both senior communicators who are supporting the prize in their personal capacity. Additionally, they have access to the leadership at On Purpose Consulting. The winners also get complimentary access to one edition of PRAXIS of their choice. This does not include stay and travel.

There is a list for 30 under 30 and a list for 40 under 40. Somewhere, those in between get missed out in gaining recognition.

35 is the age when most professionals are completing a decade of work experience and stepping into leadership roles.

The crux of Public Relations is case studies and campaigns which is not an aspect several professionals are familiar with. We want to bring the culture of solving a case back in vogue.

Hence the Young Pride Challenge and the ABC Prize. These are aimed at those in the vicinity of the ten-years experience mark. The prizes are also those that worthy communicators above this age bracket can afford with some planning and investment. We believe exposing three young professionals to international conferences is a great honour for them as well as for those aspiring to enter the profession and make a mark.

The Indian general elections are considered the largest exercise in democracy in the world. 2019 is expected to see massive campaigning as well as massive voter turnout with over 900 million Indian citizens having registered to cast their votes. Major political parties have already begun making their voices heard through their campaigns. However, the Election Commission of India have issued a press brief document which includes the following plea:

Avoid use of non-degradable, or single-use, plastics and other hazardous materials during campaigns

The Election Commission of India has requested all political parties to be mindful of the following: “usage of eco-friendly substances for preparing election campaign/publicity material—considering the long-term deleterious impact of materials such as plastics, polythene, etc. on the life-giving and life-sustaining environment.”