The late Ethel Prabhu did her under-graduation between 1968 and 1971 at St Agnes College, Mangalore. This year marks 50 years after she first went to college. She was a teacher par excellence and was one of the first Indian women who went as a high school teacher, when barely 24, to Hong Kong to teach English and Social Sciences in 1974. She taught at the St Joan of Arc School for three years before returning to India.

She was a closet entrepreneur who made handcrafted wines, pickles and preserves in order to earn extra money so that her family could have a better life. Her dream was to start her own food business by opting for voluntary retirement. But she could not realise the dream as she passed away soon after she turned 51, in 2001. The Ethel Prabhu Foundation (EPF) supports a dozen causes that have been instituted in her memory. One of which will be The Ethel Prabhu Memorial Annual Lecture in Mangalore and the EPF Woman Entrepreneur Award given to a woman in Mangalore who has been a solo entrepreneur for atleast three years and is under the age of 50.

The Award includes a citation and a cash prize of Rs 50,000/-. Nominations may be submitted between April 12th and May 3rd by sending a mail with EPFWEA as the subject to team@reputationtoday.in. Nominations should include a statement of purpose of about 100 words and one recommendation in about 50 words along with details of the enterprise. This may be in a word document with the applicant’s name as the file name. The email should also mention the date of birth, address and mobile number of the applicant. A three-member jury will evaluate the self-nominations and a winner will be announced June 2nd.

The Award will be presented during the Mother Aloysia annual endowment lecture to be held at St Agnes College in Mangalore on 2nd July. An awardee may not apply in subsequent years. Follow the conversation at #EPFWEA.

Reputation Today is supporting this cause by curating the Jury for the award.

For more information on the Ethel Prabhu Foundation, visit: www.ethelprabhufoundation.org/. 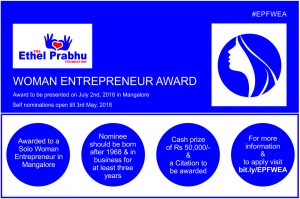 Public Affairs in the times of COVID-19