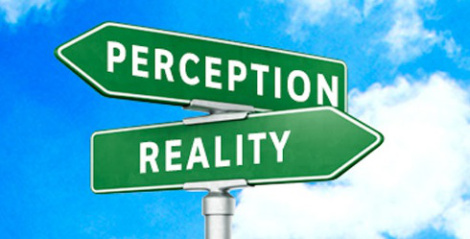 What is the first website that comes to our mind when we want to look up a company’s employee reviews? Most of us 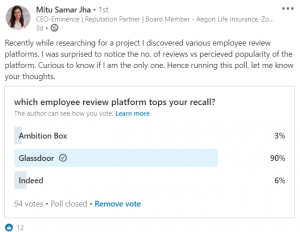 would probably say Glassdoor. I too felt the same way, until I dug deeper on such websites and found that for several companies, Glassdoor’s competitors AmbitionBox and Indeed.com had far more reviews. I then conducted a poll on LinkedIn to test whether my perception equalled others’ as well. Unsurprisingly, 90% of 100 people said that Glassdoor was on the top of their recall with regards to employee reviews. Despite having fewer reviews, Glassdoor has become synonymous with employee reviews, which is truly commendable from the company’s perspective. However, does favourable perception alone signify that a company is successful? Not necessarily. Sustenance of this positive perception becomes a challenge unless backed by the delivery of the promise. Yahoo’s case was not quite different. The company was once one of the most popular web services providers. Users perceived its mailing and messenger services to be the best and it seemed as though Yahoo had no place to go but up. However, its story unfolded quite differently, and several of its service is defunct today.

Reputation is an equation of perception and reality. A wide mismatch in any direction is not sustainable. When perceptions start going against the real picture, as is the case with these companies, it must be viewed as a red flag that we need to address urgently. Failing to do so can lead to disastrous consequences.

While observing such cases, two key observations come to my mind. First – getting the core offerings right is crucial, without which sustenance of the brand is difficult. Secondly, it is also important to have an ear to the ground and stay updated with aspects like stakeholder expectations, regulatory changes, and industry trends.

Getting the Core Offerings Right:

In Glassdoor’s case, the core offering is the employee reviews. While it is certainly still a leader in the space, I have also come across criticisms not just over the number of reviews for a company, but also their authenticity. Many users have found that company reviews are often biased towards either extreme or are hence not entirely reliable. While Glassdoor might still be one at the top of people’s recall for employee research, sustaining this perception for a long time might not be easy. Take the example of the infamous Windows phone by Microsoft. The company had tied-up with Nokia, another powerhouse, to launch this phone. Both companies were world-class in their respective industries at the time and were considered as credible service providers. However, this positive perception could not help even such large companies when their integrated effort failed. This was mainly because the product did not live to people’s expectations and there was then no excuse or saving grace for the companies.

Having an ear to the ground:

Many companies that establish themselves as top players or differentiated leaders in the industry often fall into this trap. Consistently staying popular requires more than just a legacy. Staying abreast of important trends in the industry, managing stakeholder expectations and regulatory changes effectively are critical. Jet Airways enjoyed being the customer favourite during its time and its closure came as a big shock to most people. However, when stories of the cracks in the system started cropping up, it showed that the company did not listen and invest enough in regulatory and stakeholder relationships. By the time the problem came to light, it was already too late for Jet. Yahoo’s case is similar. Its failure to understand what its users wanted and innovate their services accordingly eventually led to its downfall.

We are often caught up in brand campaigns that position our companies or products as category leaders, differentiators, or innovators. We even succeed in creating this perception and enjoy being in the good books of our customers. However, if there is a fundamental failure between the perception and the reality, good impressions are of little help. It hence becomes crucial for us to be cognizant of such gaps and ensure that close in on them quickly and effectively.

Be the first to comment on "Addressing the Red Flag: When perceptions go against the reality"

In Conversation with Tushar Makkar

Messaging through PR is imperative in the start-up ecosystem