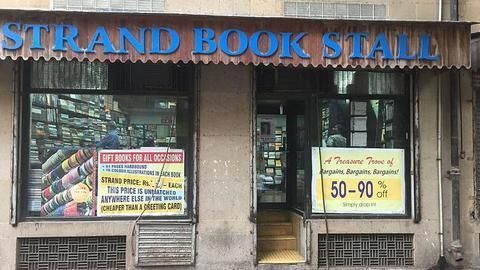 As news broke of the imminent shut-down of Strand Book Stall, the iconic bookstore of India’s financial capital, there was the usual mix of nostalgia and tears on social media. The store belongs to old-world Bombay, not the new-fangled Mumbai.

We all know the reasons by now: the video killed the radio star and online distribution killed bookstores. But I still had a thought: Cannot Strand Book Stall, the brand, be bought by a big corporate brand or tycoon and given a makeover that will enhance its reputation while feeding on nostalgia and old-world values?

I do not know if Vidya Virkar, the daughter-inheritor of Strand’s legendary, Padmashri-winning founder, T.N. Shanbagh, is selling the brand, but if she is – or can be persuaded to – it would be a great catch from a branding point of view. True, Ms Virkar stands by the puritanical origins of Strand, and does not mince words when she says: “We never sold our soul … We weren’t a second-hand bookshop, I was not going to have a restaurant or stationery to offset the loss of the bookshop. We are purists, we wanted nothing but books.”

Yet, there is, I believe, a case to do new things with an old brand – and perhaps, live out its old core values. Strand is not about books alone. Its legendary clients included Jawaharlal Nehru and A.P.J. Abdul Kalam. Its style included an owner who was to books what a disc jockey is to music – someone who would tempt and recommend. Someone with a human heart who would use the buy-now-pay-later style to help student book-lovers. Someone who loved books and book-lovers in a manner that encouraged reading across disciplines.

As a journalist, I take a deep breath and say: Wow, what a story!

Those in public relations often speak (annoyingly for me) about “paid media” (advertising, sponsorship and the like) and “earned media” (where a publication or channel talks about a brand because it is newsworthy). I can think of a third category, where something that is paid for at some level indirectly becomes “earned” at another – and Strand is right up there.

Let us now think of The Washington Post, the iconic newspaper now owned by Jeff Bezos, founder and CEO of online retailer Amazon and the world’s wealthiest man. Though the Post has been bought by Bezos in his private capacity, the good it has done to Amazon as a brand is certainly something simple “paid media” spenders cannot match. “The Post” is now headed for the Oscars as a movie by Steven Spielberg. It grows as an institution in the digital space as Bezos tries to make the old newspaper brand live a new life. Amazon is somewhere along the way a gainer in all this. Every time they talk about the Post, they talk of Bezos and think of Amazon.

Now, can I imagine a Bollywood movie or a documentary on Strand or Shanbagh? Can I imagine a new-age bookstore in which knowledgeable agents walk about encouraging young minds to pick up this “book” or that – perhaps on a Kindle or an e-reader? Can I imagine a literary gathering in a cafe called Strand Book Stall And Cafe where people discuss what book one should be reading?

As I see it, The Washington Post is about fearless journalism and fine storytelling. It is NOT about paper. Strand Book Stall is about the love of knowledge and respect for those who seek it. It is NOT necessarily about printed papers. Can a brand, perhaps under its corporate social responsibility budget, ask Ms Virkar to make the brand live on with its money? Can a moneybag who wants to show some class fish out something to help Strand live on?

From a mundane point of view, journalists will love to write about it or do stories on it, just as they do about the Post.  Yes, of course, the Post is still open, unlike Strand. But you get the picture. Why shut down an old brand that carries with it memories and experiences and positive recall – which is what reputation is all about?

So, can a brand marketer pick up the phone and try to persuade Ms Virkar? I am just fantasizing. But fantasies can breed futuristic ideas – even if they are rooted in a nostalgic past.

The takeaway for brand builders is this: Great brands are often built by those who value institutions, out-of-the-box ideas and the sheer memories and experience associated with those brands. This goes beyond the simplistic worldview of “earned” and “paid” media.

Oh, by the way, Washington Post is now profitable.

2 Comments on "Dear Brand Marketer: Can you get a client to buy out Strand Book Stall?"