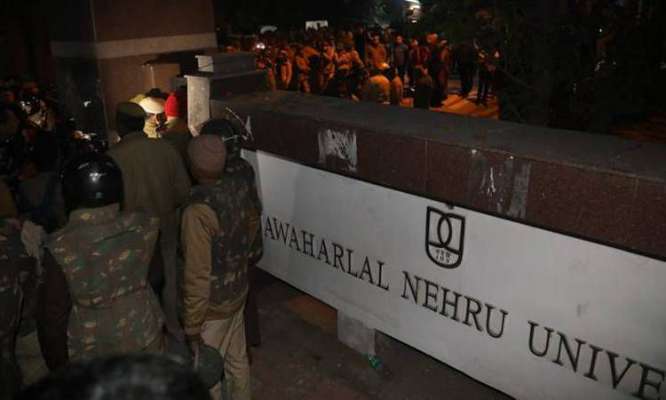 I am naturally outraged by the violence that shook the Jawaharlal Nehru University campus last weekend, but as a long-time news gathering journalist who has also worked on the editorial desk, I found some room for criticising my colleagues on the manner in which it was covered. Here is the tough part in being a journalist when some momentous or chaotic events take place: even when you know that some people are wrong, it is important to hold one’s balance in the long-term interests of both one’s credibility and that of the profession.

In the case of the violence that shook JNU in which masked goons entered the campus, maimed students and vandalised hostel premises, the technical issue was of who did it. While barbs and accusations were traded, I found some journalists being outraged (and I don’t blame them at all, as they were roughed up themselves) to a point where they lost their sense of balance to ask the pinpointed questions needed on such occasions.

It is like batting in cricket. You may see a loose ball that needs to be punished, but if you loft it to where a fielder is, you get caught. Similarly, if you are a fielder, you have to go where the ball is, not where the shot was played. In the JNU case,  I found a lack of clarity for nearly 24 hours after the violence on pinpointing responsibilities. Journalists seem to lose track of the ball and/or the field for quite a while.

The trick for mature journalists is to know how to gather facts and ask questions in a manner that generates the right sentiments that encourage democratic behaviour and meaningful administrative conduct. The trick is to avoid being sentimental oneself in the process — or at least not to wear the sentiment on one’s sleeve. It is a tough task. You can’t be unnerved or neutral where goons go on a rampage.

As I said in a tweet, there are three aspects to the JNU fracas: the criminal, the ideological and the institutional.  The first is where the outrage is justified, the second is part of the political discourse and the third is needed to fix responsibilities on law enforcers and administrators. What happened in TV news debates that I saw was an attempt by rival groups to conflate criminal conduct with ideological rivalry, and leave many questions on administrative behaviour unanswered.

I was personally convinced that right-wing activists from or associated with the university systematically targeted general students and left-wing student leaders (now substantiated by an extreme right-wing Hindu outfit proudly claiming responsibility). It was also clear that the police were hardly bothered and displayed no sense of urgency or responsibility.

However, in news coverage, you cannot let such impressions get the better of your news judgment and presentation. In fact, the trick is to be more clinical in your presentation and move towards the hard facts that separate criminal behaviour from the ideological debate so as to highlight the institutional behaviour (or lack of it!) to fix responsibilities.

Political debates lack clarity because there are vested interests that thrive on generating perceptions suited to them or their worldview.

I found an excellent timeline in the print edition of The Times of India that brought more clarity on the issue than the noisy debates as it looked back at three days of the conflict leading up to a disturbing crescendo of violence. The key point is that a false equivalence was sought to be established between minor scuffles that took place on Friday with the wanton violence that erupted on Sunday. Journalists must know not only how to ferret out facts but also understand the scale of things to give a truly accurate picture of what they cover.

I would love to give it a three P checklist: Precision, Proportion, Presentation.

I found the news media generally lacking in both precision and proportion. I know it is very difficult for journalists under pressure and facing intimidation to get it all right (I have been there). Here’s where calm editors at news desks should be guiding reporters as also those producing the pages/bulletins.  That doesn’t seem to be happening.

Let’s Give Them Something to Talk About

Looking to build a winning brand?