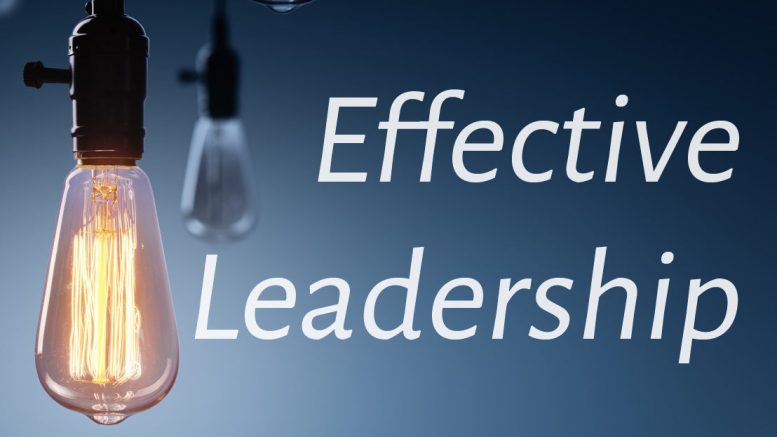 One of the most common discussion topics in corporate houses is around good leadership and what it takes to be a good leader. There are numerous discussions and debates on good leadership skills. There are specific courses aimed at making one a better leader. One can find a whole lot of books on this topic. Companies invest a lot in grooming their next level of leaders. While the theoretical knowledge can help tactically, it would never be able to train anyone to be an effective leader.

It takes a lot of hard work to be the popular, inspiring and effective leader, the one who believes that his success lies in the success of his team and encourages the weakest link in your team to deliver his best.

An effective leader is no small feat

In today’s competitive and unpredictable times, when work is more demanding than ever, it is difficult to be an effective leader. A good leader is the one who understands that it is not only about directing or pushing his team members to do a task, but also about motivating them to join you to challenge themselves and push into a new and unknown territory.

An effective leader ensures that his team feels a part of the overall objective, cause or mission. A good leader puts his team first. He believes in empowering his team to deliver the best. He is focused on building a cohesive team that stands by each other. This team is committed to a common goal and is passionate about what it does, day in and day out. It understands the criticality of its contribution to the overall business of the company.

The leaders who bring out the best in you are rare. Sometimes, if you meet them, you may not take them seriously. They are too good to be true.

I have worked with numerous leaders in my career but there is one CEO who stands out and not because he was an easy-going person, but because he invested time to figure out the best way to ensure I deliver my best and followed the strategy throughout the time I worked with him.

He guided and supported me from the first and ensured that I do not become the target at the crazy workplace. While he kept track, he never micromanaged. He spent a lot of time building a great personal rapport with me, to ensure that I can walk up to him and discuss any challenges I may face at work. He became my confidant, my trusted partner and my mentor.

An effective leader is the one who takes pride in your success. I experienced this for the first time when working with him. I was new in the organisation and it was my first announcement. While I took it as yet another media announcement, he seemed concerned and on an overdrive. For a moment I thought he might be one of those leaders who love to have all the control. But, I was wrong. I figured out that his concern was purely out of the fact that he wanted me to make an impactful beginning and leave a lasting impression on the key stakeholders. The announcement was a success and the tone was set for the future.

In the months that followed, he ensured I am involved in critical projects and get the credit for all the good work. I was elevated to be a part of the leadership team and was a part of critical meetings. There were days when I was snowed with work, including unwanted tasks that came my way due to inefficiencies of another leader. However, he knew I am his ‘Go-to person’ when there was fire. He put his faith on me and I delivered.

There were crisis situations- days when the world would be going upside down. But one call to him and the stress would disappear. He would always show you the positive side and make the all the chaos sound trivial.

Also, there were days when we would disagree and he would let me share my view point. His ego didn’t exist I felt. He would hear me out and then put his point across. If he really wanted me to follow his idea, he will give enough logic to ensure I am convinced about what I am doing.

He always encouraged me to take risks. If he felt I am not confident of the results, he would sum it up with one line- ‘Don’t be worried to experiment. If you fail, you will learn.’

He told me much later that he had realised that I had immense potential and just channelised the energies in the right direction. These are what good leaders are and this is exactly what it means when it is said that ‘leadership is not about you.’. There is a lot I can thank him for, including the leadership style which is rare to find in today’s times.

Leadership is not all about you

The most effective form of leadership is supportive and collaborative. It is never about assigning a task, role or function to a team member. It is also not about constantly pushing or following up, without need. It is definitely not about ridiculing your team member or not appreciating good work for the fear or insecurity of oneself.

As John Maxwell wrote in his book titled “Everyone Communicates, Few Connect” -“When we learn to turn our focus from ourselves to others, the whole world opens up to us.”

Here are a few things to keep in mind to become a leader who is valued more by his people:

Create a culture of collaboration and cohesiveness

This is very important for a team to deliver the best. I have been a part of teams that are extremely cohesive and closely knit. Sadly, I have also been a part of a team that only thrived on loose talk and showing faults in another member’s work. This is where one can differentiate a good leader from an ineffective one. A good leader will always build a collaborative team- that works as one unit for a specific goal, stands by each other and takes pride in each other’s success. He will create a culture in his team that is around working together, leveraging on each other’s strengths, so as to deliver the best possible results.

A good leader is humble, and believes that the work is an opportunity to network, nurture and train their team, and create impact. He is passionate about building a smart team as they understand the power of collaboration.

Empower your team and promote a spirit of selfless service

As a leader, you cannot be hand-holding your team at every given point in time. Hence, it is best to build a team of confident individuals who are not running to you for every decision. Empower your team to take calculated risks. This helps make life easier for a leader, who can focus on more critical tasks.

As humans, we are designed to figure out if the leaders are committed to help us succeed or if they are still figuring out how to get their feet on the ground. Good leaders should help their team members do well and give them credit, where it is due. An effective leader gives more importance to the needs and desires of his team members and trusts them to put in their best.

Appreciate all the good work

Good leaders do not shy away from appreciating good work, whether it is about someone stretching to deliver on a tight deadline or someone just thinking of a great idea. They appreciate as they believe it motivates the team to put in its best foot forward.

One of the reasons why people leave is because they feel underappreciated and under-valued. A leader should never take the credit for the work that their people do. Instead, he should celebrate small and big wins to ensure that more people are motivated to deliver their best.

Be open to conversations

A good leader encourages his team members to share their ideas and hears them out calmly, even if they are contrary to his own. He is confident about his abilities and is passionate about building future leaders. He is open to hearing from his team, including critical feedback. He is willing to learn and gain knowledge as he understands the value of new ideas.

A good leader is empathetic towards all and does not come across as someone without a heart. A majority of leaders are of the belief that being heartless and ruthless equals to professionalism. Unfortunately, that is not the case. People judge leaders on how they react to critical life situations around them. This is because they believe it gives them a view of how the leader will react in case his own team member is stuck in a personal crisis.

Leave your ego behind

A good leader is the one who is welcoming and can be easily approached for a conversation. Hence, it becomes important to leave your ego behind and be seen as someone who is approachable and not perpetually in a bad mood.

A good leader understands that people are going to do better than them. He will have people in his team who have significant achievements. In turn, they may get another degree, get a certification, or move on to a new position. A good leader is always proud, never jealous.

Leadership is not about you; it’s about investing in the growth of others.

One should value leadership as an opportunity to empower others. There is a need for more leaders to value the power of effective leadership. This is the time for new way of leadership that is around team work, collaboration, and people empowerment. A new era of leadership has dawned which is about team spirit and not about the alpha leader. The leaders are increasingly being seen as mentors who build the next level of leaders and ensure that people look forward to coming to work.

Be the first to comment on "Leadership: It’s not about you"

Trust in the time of AI

Is digital PR changing the future of the marketing landscape?