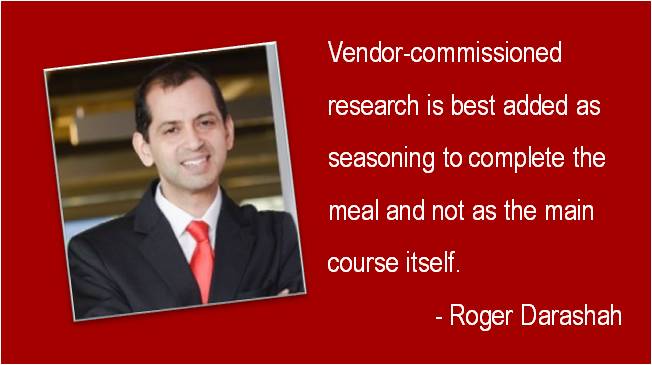 At the beginning of my career in Public Relations, in Europe, market research was considered the ‘Swiss Army Knife’ of PR tools; whatever the predicament, third party research could always be employed to save the day.

Want to create a market for a new product category?  9 out of 10 teenagers confess to missing school or college because of acne . . .

Want to enter a new market? 89% of Peruvians feels taxi services are over-priced in Lima . . .

Want to change a Government policy? 76% of first-time voters in France view bureaucracy as the number one barrier facing entrepreneurs . . .

All conclusions presented “according to research conducted by (insert name of ‘independent’ market research firm . .”  Look at the small print and you’d invariably find that the organisation commissioning the report is identical to the whose logo appeared on the press release!

The self-commissioned (or ‘self-serving’!) market research should have been exposed years ago; but the practice continues. The reality is that such research rarely stands up to scrutiny; a sample size of 10,000 respondents may be considered ‘representative’ in the UK; but representing just 0.18% of the local population, I would question this. In a market such as Brazil or India such data would be considered  insignificant. In such markets, research responses are invariably weighted towards cities; for practical reasons, data is far easier to collect. But this further compromises the findings since – in both emerging markets cited, the majority of the local populations live outside metro cities.

Quite apart from the absence of statistical logic, such research cannot be considered objective, since the organisation commissioning and funding the same is exploiting the findings to its own ends. All perfectly legitimate in a commercial sense, but hardly ‘independent’.

Is this a crusade against the noble art of market research? Certainly not. I’ve worked with some of the World’s largest research firms in Europe and Asia; in fact, the best man at my wedding is currently running Middle East operations for one of the largest! We are close personally and professionally.

I believe that vendor-commissioned market research can have a place as part of a narrative, to help support or validate an insight. But only if accompanied by third party data – published reports, co-creation, anecdotes – as well as company information such as customer feedback. The former is typically ignored but can prove far more compelling than data generated by/for a brand. The effective sourcing and marshalling of public data – or ‘proxies’ – can add even more credibility to an insight; simply because it’s not been generated by the brand. Such proxy data can be found everywhere, from desk research and news reports, to celebrity quotes and academic papers etc.

In the final instance, “Indian millennials are more environmentally aware than their predecessors according to three research reports, one online survey; the most popular book and film of the year cover the subject; and three of the top 10 artists on iTunes are environmental activists. And they are prepared to pay a premium, according to research . . .  “, is a far more compelling pitch than: “According to research commissioned by an environmental manufacturing company, 80% of Generation Y would pay a premium for ecologically-sourced products.”

It’s only when combined with a variety of independent data sources that vendor-commissioned research really adds value to a narrative; as ‘seasoning’ to the story, not a substitute to the main course.

SPECTRA Plus 2021: Thrive to break the clutter – Where do emerging firms see themselves three years from now?