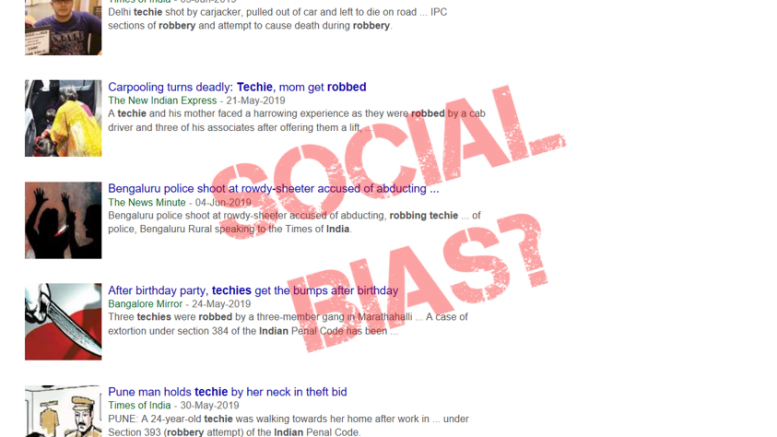 Some days ago, when I saw a headline about a man being robbed, I wondered why the news headline referred to him as a “techie”. Does it make a difference if the victim of a crime works in software or not? Equally important, there is now a tendency among news organisations to assume that the word techie (short for technologist) applies only to those in the information technology industry. As if those who invent medicines, design cars or process chemicals are not technologists!

This is what I call unconscious social or cultural bias. In the past two decades, thanks to a computer-driven boom, there has been an implicit glorification of those who work in any related industry. The irony is that within the computer-linked industries, information technology or IT refers to the specific usage of a combination of software and hardware to drive efficiency or productivity in an economic organisation. Not all software or hardware necessarily constitutes IT. But we now have a “sab chalta hai” (anything goes) culture in which we have created a new caste system in news language.

I just went to Google News and searched for “techies robbed” and quickly found several items in which it was not really relevant to the news that the robbed persons were so-called “techies.” But, notably, datelines such as Bangalore, Pune and Gurgaon typically had more of this.

The fact that some news brands such as The Times of India or Pune Mirror cater typically to an English-speaking consumer class has an implicit “audience bias” that is understandable. When a headline in TOI says “techie” it subtly conveys to the reader that the victim is “one of us”. From the point of view of police conduct or news in the orthodox sense of the term the profession of a person who is robbed on the street is irrelevant to the essence of the news unless there is a context that justifies it — such as a cyber crime in which the use of a software application may make the term “techie” even central to a story.

Of course, the description of a crime victim’s profession does add to the “colour” in vividly describing the story but as far as I can recall, I find the word “techie” or “doctor” being used reveals a class bias of sorts. A clerk or shopkeeper rarely gets such description. As if they are not worthy of being robbed!

That reminds me of how, in the 1980s, those who wrote software code were called “programmers” in casual language, but that became “software engineer” a decade later and “technologist” or “techie” a while after that.

When I was a trainee in the TOI, somebody sat up one day to take notice of the fact that a headline said “Old Parsee Couple Murdered” when the word “Parsee” referring to their community was not relevant to the story. But the TOI, being ‘the Old Lady of Boribunder’ (named after the location of its long time office and printing press) was essentially a South Bombay (oops, Mumbai) brand that dated back to British rule, when relatively affluent English-reading Parsees were part of the core audience.

Bias in use of language has many dimensions. Audience focus may be an acceptable bias, but is a questionable one nevertheless. We live in a society that is supposed to be fair, equal and celebrates diversity. And diversity, by the way, is not just about gender diversity. It has other aspects.

Smart news organisations (and brands that communicate with language) often need to revisit and comb through their press releases, advertisements and other forms of communication to watch out for conscious or unconscious biases. Spotting gender bias is increasingly common (as spokesmen have become spokespersons) but other biases still lurk — often in what is left unsaid than in what is said. I hope to write about that later. For this week, journalistic bias is my not-so-amusing muse.

The element of Critical Thinking in decision making