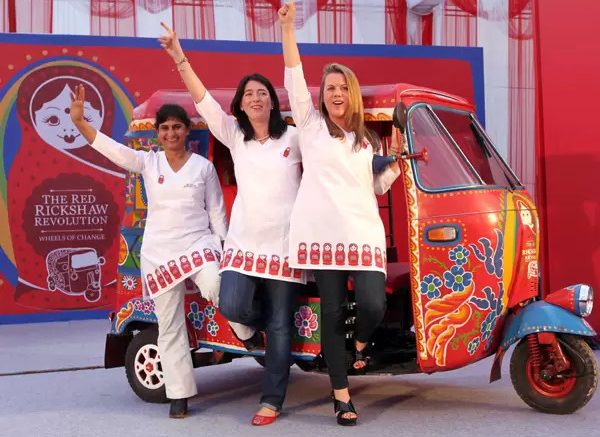 Let me begin this piece with a trite remark: ‘Women have always played an important role in my life’!

Having got that out of the way, the fact remains that women, both personally and professionally, have indeed shaped me and my thinking to no small extent.

Since this piece is going to be read by professionals, let me stick to the women who have influenced me very deeply in my professional life…the personal episodes can follow in another series.

Our MNC client in the PR firm where I worked, one day invited me to travel to Delhi to get briefed on a unique initiative they were planning to coincide with Women’s Day!

Not knowing quite what to expect, I landed up at the client’s Parliament Street Office for the briefing.

Here, I was introduced to two English women (one was technically Irish).

‘Hi, my name is Laura Turkington. I am the Director of the company Foundation. And this is Carina Deegan – her husband is also the CFO of our firm in India.’

Introductions done, we all sat down in the board room. The white board had a map of India and a red rickshaw stuck to one corner.

‘So Atul, Carina, me and Sunita, who you will meet in a bit, are planning to set off from Delhi in a red rickshaw and drive all the way to Mumbai’.

Before Laura could continue, the door opened and Sunita walked in. I was introduced to her, and was told that Sunita is the first lady auto rickshaw driver in Delhi.

Having heard about the broad plan and having met the three women who were planning this journey had me thinking about multiple questions. But I did not have long to wait for the answers.

It was as though Laura and Carina had anticipated the questions, and had all the answers!

‘Atul, the Red Rickshaw Revolution will be a unique initiative to celebrate the achievements of ordinary women accomplishing extraordinary feats across India. The objective of this initiative is to spread awareness, garner support and raise funds for NGOs working to empower several other such women’, Laura said.

Carina added, ‘We leave on the 9th March (2013), and will cover the 1500 km journey to Mumbai in a red rickshaw,  passing through Alwar, Jaipur, Ajmer, Chittorgarh, Udaipur, Ahmadabad, Vadodara, Surat and Daman and reach Mumbai on 18th March 2013. We will be meeting ordinary women and we will be using social media to share the stories of the women we meet in the hope to find support for them and also inspire other women in India.’

Laura took over again and added, ‘The Red Rickshaw Revolution as an initiative was conceptualized from a small concept of riding a rickshaw and getting to meet some of the amazing women in India who have been working selflessly for a social cause. The idea is to give these women a platform to voice their stories. By undertaking this journey, we plan to reach out to maximum number of people and build awareness around this campaign through various social media streams and encourage them to join the revolution. The Red Rickshaw Revolution will raise funds for 3 NGOs – Apne Aap Women’s Collective (AAWC), Breakthrough and Corp India.  All funds generated will be used by these three NGOs for educating the underprivileged, provide sustainable livelihoods, and providing safety for women. And our company will match if not exceed the corpus raised.’

I had remained silent all through this. Because I had never met such intrepid women who were working on such a wonderful cause using a unique, never tried before method!

It was then Sunita’s turn to speak.

‘The Red Rickshaw Revolution is a great campaign and it inspired me to contribute by creating awareness about women empowerment. While we celebrate Women’s Day, not many people are aware about their rights of being a woman. I am very excited to be a part of this campaign as it will highlight achievements of the ordinary women who have accomplished extraordinary feats’.

There was silence for a few minutes after all three had spoken.

That is when I realised that the briefing was over, and that they were looking to me for PR suggestions!

I just said, ‘You have a very powerful evocative story. Nothing like this has ever been attempted. While social media may be in its infancy, I also see a huge participation, once we have your story out in mainstream media – not just in Delhi and Mumbai, but right across your route in all key regional media as well.’

Our Delhi team was accompanying me at this meeting, and even while we were discussing the finer details, they left the conference room and began dialling the numbers of journalists.

An aside here. The Delhi team accompanying me was also an all women team!

Before the meeting concluded, we already had 24 interviews lined up for the participants….individually, and together. The Delhi bureaus of the publications were all given time slots for the interactions for the next 2 days – and this, when the event was still more than a fortnight away.

The stories flew thick and fast.

The day before they left Delhi for their journey, we hosted a press conference for them, which was attended by every newspaper and channel you could think of. Media had also come down from Chandigarh for the press conference.

Once again the coverage was phenomenal.

As indeed it was right through the days that these ladies actually drove the red rickshaw into Mumbai. By then, pretty much everyone in all my social circles were speaking about this unique initiative.

But it was something which Laura said to me on the day of the press conference which has stayed with me till today.

‘Atul, what I am most delighted about was the speed at which you and your teams worked. You did not get bureaucratic and ask for written briefs, or unnecessary detail. You, and your all women team, just swung into action. That to me is the true test of how good a PR partner is – you understood the power of a big idea; you understood how to tell the story; and you delivered, and did not insist on making up long winded plans.’

The journey was done. Kudos came in from every quarter. The client was delighted, and contributed a huge amount towards the fund raising.

I was somewhat introspective after the event.

Thinking of the women who had shaped my professional life, and contributed to my growth. Many came to mind.

But a special thanks to Laura, Carina and Sunita – for proving what women are capable of.

My hat’s off to them, and the others who I have been privileged to interact with – including those in my wonderful team.

The future belongs to the best, creative storytellers!