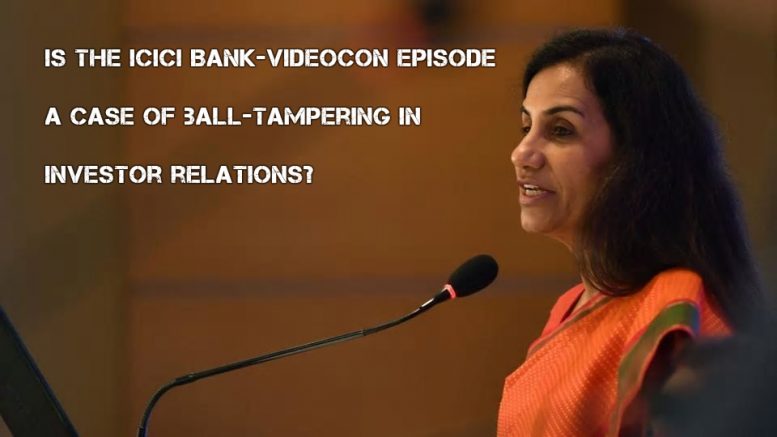 Do short questions need long explanations? That is the journalistic question that comes to my mind on a morning that features newspaper reports with Videocon group chairman Venugopal Dhoot on whether or not his group was involved in an improper loan deal involving ICICI Bank CEO Chanda Kochhar, who is in the dock this week after a major investigative report by The Indian Express.

In the business of reputation management, things are complicated when you have to deal with the mainstream media, the social media and shareholders, and that is the current challenge for ICICI Bank. It is time for us to focus on investor relations, a key aspect of reputation management. The ICICI turmoil is a very good case study for many reasons.

To start with, ICICI is a consumer brand, and whatever happens in that company as reported in the media or gossipped about on Twitter, Facebook or Whatsapp is bound to tell on customers, employees and the general public.

More important, however, are perceptions on the case involving an alleged conflict of interest in which Ms. Kochhar’s husband Deepak is said to be intertwined through a complicated parallel investment relationship with Videocon, which borrowed huge amounts of money from a consortium that included ICICI. This is of interest to both depositors and shareholders. Since the loan in question turned bad, eyebrows are bound to go up.

As the CBI initiates a probe on whether there was a quid-pro-quo arrangement in the dealings in which ICICI’s board has denied any wrongdoing, and SEBI starts looking into disclosures from the corporate goverance standpoint, I see signs of a multi-faceted brand challenge.

I am afraid ICICI is not looking good so far. On the face of it, the case involves some relationship details that may be difficult to establish in a court of law, but from the media point of view, tongues will wag.

The board has mentioned disclosures, but the statements have been so vague that they raise more questions than answers. From what I have read, there is no clarity on when, to whom and how Ms. Kochhar made the relevant disclosures to clearly prove the absence of a conflict of interest.

Ms. Kochhar was a member in the committee that approved a huge loan to Videocon and the defence is that ICICI was not the leader but only a partner in the consortium and she was only a member and not the leader of the committee that approved the loan. I am intrigued because in the very same week, we saw the news involving ball tampering by Australian cricketers. Imagine if David Warner said he was not the captain of his team and only Steve Smith was and hence he himself had no role to play! The whole business of conflict of interest is tricky. If Ms. Kochhar had no conflict of interest, there was no need in the first place for a disclosure as claimed by ICICI’s chairman M.K. Sharma.

If indeed she did sit on a committee in which she had no influence, what was she doing there in the first place? More important, was any relevant disclosure made to the entire committee or the leader of the consortium?

Now, let us set aside the merits and details of the emerging case and look at it from the point of view of a public relations manager who has to bat for ICICI. My experience tells me that corporate executives in such instances should be more clear than vague if they are to come out of this looking good. “Spin doctoring” has limited value in an age where a long blog and a short tweet can effectively puncture holes in vague arguments. A WhatsApp meme can complete the picture.

I often liken the news media to the judiciary and public relations to the legal profession. They say you don’t lie to your doctor or lawyer. You can extend the same courtesy to a PR professional if you are a professionally managed company, particularly a listed one.

The whole case can be backtracked to a Videocon shareholder, Arvind Gupta, who is now being described as a whistleblower — and ICICI is also a listed entity.

I am now considering the prospect of an annual shareholders meeting at ICICI Bank and the fireworks one might witness there. Remember, the company is a widely held one with active shareholders. Any PR person in a backroom meeting involving such a case must have a checklist if she is not to be caught in a pincer attack between an investigative journalist and an activist investor. That should include what-if scenarios that involve government authorities, shareholders, news media, social media and backbenchers in parliament.

This is so interesting that I can write a novel inspired by this. But let me stop right here. You get the picture: A listed company that has multiple stakeholders including employees, investors, customers and partners cannot afford to be vague. I would love to see students in mass communications institutes hold group discussions on this issue.