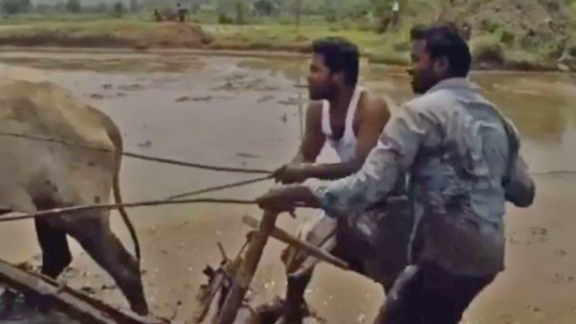 One story on the front page of The Times of India made me sit up last week. It was about two farmers in Telangana who took up the ‘Kiki Challenge’ and used the oxen in their farm to do a dance trick with the Drake hit ‘In My Feelings’ (‘Kiki Do You Love Me’). At a personal level, I thought it stupid that a Canadian singer’s song with a very ordinary tune should become such a big global thing. But then, it dawned on me that the secret behind the whole thing is that it is increasingly important for mass media in the digital age to rely on two things: simplicity and interactivity.

Being an old-fashioned snoot who grew up on rich-textured bands like Pink Floyd and the depth and range of Carnatic music, I might prefer to say “ordinariness” instead of “simplicity” but we have to learn a lot in dealing with the times. I googled ‘Kiki Challenge’ and found it has already thrown up 53 million searches.

NPR weighed in with a story that said the Indian farmer video on the Kiki Challenge alone resulted in two million views and three arrests. The Railway Protection Force arrested the three Kiki challengers as safety concerns loomed in congested India known for traffic rule violators.

The Kiki Challenge goes back to just a month ago when Instagram comedian and social media influencer Shiggy asked his followers to shoot videos of themselves dancing to the lyrics of the Kiki song.

You may recall that India’s ‘Kolaveri’ song in 2011 (more than 157 million YouTube views of the original on last count) became a pan-Indian range after its birth in Tamil Nadu. I remember giving a talk on why this song became a hit and have also stumbled on a business story explaining the marketing logic behind the song. The Kiki Challenge is only a mammoth, global proof of how you can make a simple idea scalable and viral by bringing in mass participation, curiosity, creativity and parody in an age where we are all content creators.

But, as the railway arrests showed, you have to be careful not to cross a line where law enforcers move from a humorous tweet (Mumbai Police cautioned people that they may ‘face the music’ if the challenge crossed its limits) to real arrests. Big risks involve big responsibilities. I find most social media marketers use interactivity rather lamely.

Mass interactivity to generate virality is incredible for any reputation builder. Narendra Modi has used this by inviting people to participate in the MyGov platform. But a google search for MyGov throws up only 2 million searches, which in a nation that has about 300 Internet connections does not look big to me.

I do believe asking people to participate is not really a big deal if they don’t feel a sense of creativity, success and joy associated with it.

All this forms part of a catch-phrase old-world media folks (such as myself) like to use to educate ourselves about the new age: the people formerly known as the audience.

Tom Glocer, who was CEO of Reuters, my former employer, said: “If you want to attract a community around you, you must offer them something original and of a quality that they can react to and incorporate in their creative work.” I would discount the word “quality” sometimes in my cynical state and substitute that with “engaging simplicity.”

And so, let me end on an interactive note: can you come up with instances of how audience interactivity worked for you in building reputations of brands or people or ideas? You just have to answer in text. No need to post videos of yourself dancing while you give me the answer.

Be the first to comment on "From Kolaveri to Kiki: Creativity and interactivity usher in digital-age media power"

Will the Mumbai Climate Action Plan save the city?

Regional Content – The next big thing for digital in India