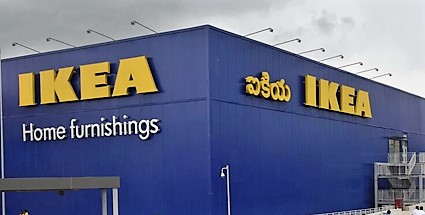 I was one of the forty thousand who turned up at the Ikea store on the day of its debut in India. My fascination for Ikea goes back to 2003 when I saw my aunt and uncle move back to India to retire after spending many years in the middle east. Their container during transfer of residence included several pieces of Ikea furniture which are till date part of their home in Pune, 15 years after they returned. On my first trip to the US in 2010 I spent a weekend at a friend’s house and when she asked me what I wanted to do and see the only thing on my list was to check out an Ikea Store. Ever since I have been to a dozen Ikea stores, including to one of the largest in the outskirts of Stockholm in the home country of Ikea.

Ikea has played an important role in the lives of millions of people because it is often the first port of call for students moving out of home for the first time to be on their own in campus accommodation. It is the choice of thousands who start their first job in a city away from their home. It is a preferred by many newly married couples as they set up their house. It’s range of affordable and high-end furniture and furnishings combined with the option to save money by assembling it on one’s own and its state-of-the-art design make it a one of a kind brand. Ikea does not have a single brand that it competes with but considers carpenters and local furniture stores in cities it operates as its main rival. For those of you who have not been to an Ikea store, you can now visit one in Hyderabad. And for those going to the seventh edition of PRAXIS, plan your return tickets in the evening on Sunday (30th September) so that you can make time to visit the store. So much so, we as organisers have cancelled all plans we had for sessions on Sunday so that delegates coming from outside of town can check out, have lunch at the Ikea restaurant, shop and then head to the airport.

Well, let me go back to where I started out from. So why did I go to the Ikea store on the day of its launch? Simple answer – I was invited to be part of the Preview Day but I could not make it, so I went the following day.

The longer answer is – When an iconic brand opens in India, the first day is in a likelihood going to be an experience filled with learning for all stakeholders – be it employees, customers and the community that lives around where the brand operates out of. It is rare that one gets to be part of a historic day like this that if full of learning. There is also a chance that the opening day could have its own share of crises. In fact, Ikea averted a major crisis by moving its original day of launch by three weeks from July 19th to August 9th because after they announced the launch date they realised certain elements of the store would not give customers the best experience they ought to get. While it looked sloppy at first, in hindsight I’m sure the management took the decision in the best interest of the brand. Here are my five takeaways from what I observed on Day 1 of Ikea, first hand for reputation management professionals.

Are you practicing Picasso’s way?