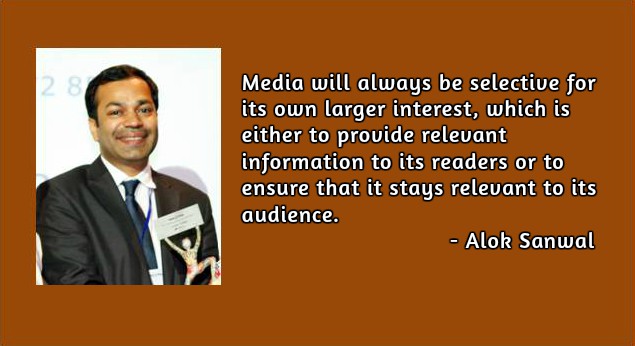 Alok Sanwal – the COO of Jagran Prakashan Ltd. and Editor of i-next, a bi-lingual daily – is one of those few professionals who dared to swim against the tide and made a shift from marketing to editorial. In a frank conversation with Lovejeet Alexander, Alok elaborated on the value addition by the new age communicators and the changing trends in political class’ media relations.

RT: You have seamlessly sailed from branding to editorial, and now lead a popular and successful publication. How was the experience of playing two different roles?

Ans: I believe that branding and editorial both are all about communications. One is about mass communications and the other is marketing communications. Both are based on the same fundamental communications school practices. Just that the audiences change. One is aimed at achieving something while the other is aimed at mass with news at its core. When you head marketing communications, you have to run a business model and I suppose that editors today also have to keep in mind that there is an input output equation. Objectives are well defined for both. The delightful part of being on the editorial side is that it comes with an opportunity for social connectivity and meaningful contribution to the society.

RT: Your brainchild i-next was an experiment that broke all norms. It was a bi-lingual tabloid from Jagran’s stable. Now, it’s a broadsheet. What led to such experiments and how has the experience been?

Ans: When we started 10 years ago, the vision was to be what our TG is. Our TG is bi-lingual; they continue and keep talking in a mixed lingo. We picked the same common used language and quintessentially have remained like that. Our bi-lingual format has defined our identity. Incidentally, we still are a slim broadsheet and not a regular broadsheet. It’s part of the progression that is based on research which says that broader format has a greater acceptance and helps us in making a better connect with our reader.

RT: Your editions cover several states. Many of them recently witnessed assembly elections. Have you observed any difference in political communications between recent and earlier elections?

Ans: There is a clear shift in terms of political communications which I would like to call a progression. Use of technology into the scheme of things has been way more than ever in the recent elections. The new age communications strategists are leading political campaigns from the front and are leaving no part of the society untouched. What statement is to be made, who is it aimed at, how to respond to it and what needs to be communicated first, what later, it’s all dependent on the new age strategists.

RT: What do the new age political communicators bring along to add to the political scenario and electoral system of India?

RT: Do you see any difference between the communications strategy of regional and national political parties?

Ans: National parties have to contest across the length and breadth of the nation so they have to be careful in picking up the issues and agenda and have to distinguish between the communication that is to go national and the one that is to go very local. A comment that is relevant in one part of the country may not be conducive for the party in another part of the nation. They have to differentiate between the two and to make sure what is communicated locally and what goes out nationally. While a regional party does not have that big a challenge.

RT: Media complains that governments are replacing press conferences with tweet conferences nowadays. Interaction of the present PM with the journalists at the best is for an annual selfie session. What’s your take on this?

Ans: There should be warmth between the government and media in general and there should be a definite level of keeping media in confidence and vice versa. That diplomacy is being handled in a slightly different and evolved manner now. I think that the earlier government was selective in keeping the editorial heads of key media houses happy and following a heavy PR strategy which this government probably is not following. It is not into bracketing policy. Uniformity of communication reaching to everyone is what the larger chunk of media is happy with.

RT: It has often been observed that the communications strategy and sometimes even the messaging of political parties changes completely after they come in power. How do you see the same?

Ans: In message, I suppose there is a broader level of consistency but there is a course correction. Once in power, one is consistently making his communication appropriate, relevant and probably working on to highlight the strengths.

RT: Whenever a communications plan, especially that of the government fails, the party and supporters start blaming media. Do you think that the communications strategists should learn to accept failure?

Ans: The communications strategy irrespective of whether that is for a product, a party, an individual or brands, if it is aimed for certain objectives, the strategist should always take into account the external factors and how people are going to react to them. Why blame media? Ultimately media will always be selective for its own larger interest which is either to provide relevant information to its readers or to ensure that it stays relevant to its audience.

RT: Sometimes we see two or more power centres within a party. Many a times their messaging is poles apart. Could there be a strategy that can take care of such situations?

Ans: Firstly, the party which has a clearer core, ideology and communication within the cadre and party line and clear perspective on multiple issues will not face any such issue. Though there may be several power centres within the party.

Secondly, there should be an internal process of clearly briefing the spokespersons along with the dictum and decorum that nobody will speak out of turn. If there is an issue then rather than specifically reacting to an incident and giving a verdict, the leaders should stick to the larger perspective and ideology of the party. Broader decorum is an absolute issue of internal communication which needs to be consistent and everybody needs to abide by that.

RT: What is that one piece of advice that you have for political parties with regards to their media relations?

The Transformation of Regional Print Media in India

Pay-for-play will dominate PR in the coming years

Be the first to comment on "Media Speak – Alok Sanwal"