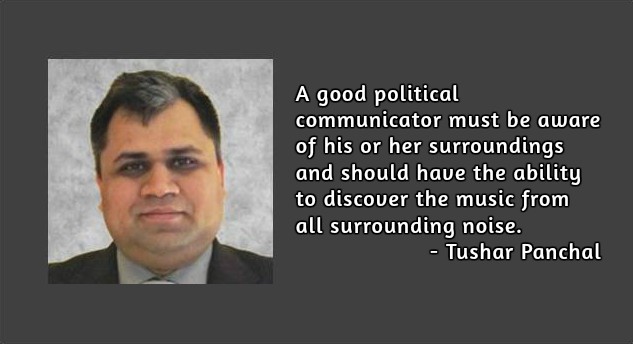 As a communications professional who has had several opportunities to dabble into serious political and government communications since 2003, I have seen the evolution of this field from an individual to an organisational level, just like the world has witnessed the emergence of multimodal supermarkets giving a tough competition to friendly neighbourhood kirana shops.

Earlier, it was limited to having a coterie of people around a political leader advising him or her on his public and media appearance, armed with whatever little information or access to knowledge they had basis their experience and expertise. At the party level as well, it was left to some savvy media managers to manage communications. It was not a very complex world to live and thrive in. And, of course, it was also not as sexy or glamourous as it sounds today. Especially, after one such new age communicator specialising in political communications became part of a certain state’s cabinet, many of my friends, who worked with me, chided me for not being consistent and focussed in this field.

But mind you my dear friends, it’s not at all sexy! It is a tough job and not a single person’s job. You have to be the one who must wear a watch, but not to look at the time, but to keep a track on finish-lines and appointments. It’s a mentally and physically challenging job for you and demands utmost commitment from you and your family and friends. It’s not about sitting in war rooms created in backyards of luxurious bungalows of Lutyens’ Delhi or lush state capitals. It is about hitting the dirt track at the first instance. It is about sipping cutting tea in village dhabas and sharing meals with people in their huts. The real India lives in villages. A good political communicator must be aware of his or her surroundings and should have the ability to discover the music from all surrounding noise. S/he must have a keen eye for making sense of big data for big results along with enough gut feeling to stir the human emotions. Now, if you don’t have both – it’s perfectly alright – nobody said that you have to be alone in this – you can always have trusted partners to do that for you. The qualities you need is one of a collaborator, a leader, a team player, someone who is a keen student of psychology and human behaviour, and has lots of patience.

There are many famous political communicators and then there are many underdogs, who like to remain behind the curtains and continue to make their clients look great. It is my strong belief that the day you stop shaping the news and become the news is the day when you need to relook at what you are doing and evaluate your choices. The more connected you are at the grassroots, higher are the chances of your success. Communicators out there are working day and night to help politicians to remain in touch with the public. Technology is changing the way the entire process used to work. However, it hasn’t changed the need to connect with real people with real issues. And that’s where the success lies. Delhi and Bihar elections are such examples where many pundits failed to gauge the mood of the public by solely relying on hi-tech gizmos and larger than life communication campaigns. I predicted a win for Nitish Kumar in August 2014 over a dinner with a friend. He didn’t believe me then but called soon after the results were out. He was happy that I was right but little sad because he was wrong! After all, what are friends for!

A lot has been said and written about recent elections campaigns. All I am watching now is the preparation many major political parties are doing for the upcoming elections, and observing the techniques and technology being deployed for US Presidential elections. I would be happy to share what worked and what didn’t once these are over. Till then, enjoy life. Be a good citizen and vote for a better tomorrow.

Preparing a spokesperson for a press interaction

A spokesperson’s guide to holy-cow issues