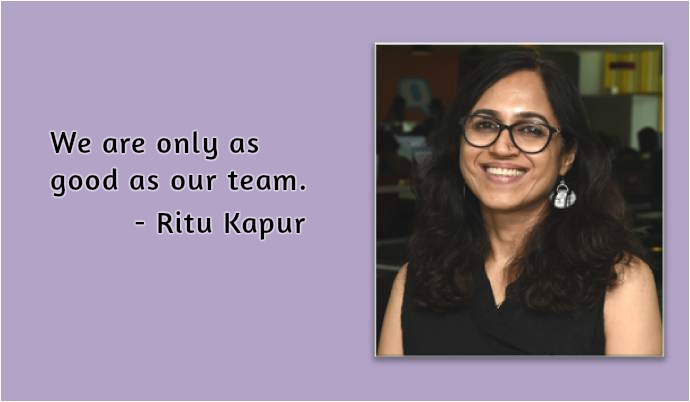 Ritu Kapur is a veteran of broadcast journalism, who co-founded The Quint with Raghav Bahl, a serial entrepreneur and investor. Earlier to embarking her journey with The Quint, Ritu was Head-Programming at History Channel and Features Editor at CNN-IBN. Her TV shows like The CJ (Citizen Journalist) Show and Bhanwar won her critical acclaim and also several awards.

Shree Lahiri chats with her on the young, vibrant team and the culture that exists at the workplace.

RT: Internal communication is an extended form of storytelling, like news. What are your views?

Ans: Don’t agree with this.

A lot of internal communication happens on two counts, the work-a-day stuff, i.e. what’s going into production, workflow, editorial policy and ethics and, a lot of it is one-on-one and two-way.

The team is made up of distinct working individuals. It is not a homogenous mass. The team works as a unit and, at the end, if they win it’s a victory of the team. But, at the same time, within this set-up, there are a number of individual issues and concerns which may impact the whole team.

By and large, Internal Communication at our office is very significantly one-on-one with young individuals, who are growing and evolving – bringing in collective strength.

RT: Like in news, it’s about ‘real-time information sharing’ in internal communication. What do you feel?

Ans: Absolutely and strongly agree with this. Any update in terms of journalism, news break, company policy, new technology must be shared with the team. We believe in communicating to everybody, as it happens. Transparency is important – the highs and the lows. Everyone in the team feels that he or she has a stake in everything that goes on.

Ans: What you see in the media are things like a policy on paternity/maternity leave and not much else. You don’t hear too much about HR communication in media. It is important that such conversations find a forum. Specially, sexual harassment and why it persists despite the Vishakha judgement.

RT: Can media act as a conscience, to remind organisations that they need to raise the bar as far as internal communication is concerned?

Ans: Absolutely! There’s no doubt about it.

Media plays a large role. Take for instance the TERI case, which involved charges of sexual harassment against Mr. Pachauri. The fact that it’s out there in the media means it is driving the discourse, and at the same time, raising questions too. Sometimes, I think the communication has to jump out of the corporate space and come out into the open.

Also, in this digital world, every laptop or cell phone can become a media outlet, as employees take their issues to open blogs.

RT: How far do media companies go, to work towards improved employee engagement? Are there any grey areas?

Ans: I don’t know how it works with other companies. For us, it is clear. From the start, we knew we were only as good as our team. I have always given importance to ensuring that every individual’s skills are exploited. A lot of our work is creative, unlike say, sales. Understanding employee requirements and needs is one of the learnings I have taken away from CNN-IBN. It’s important to know each one by name, and understand what gives them most work satisfaction. Very often, that is what each one is looking for beyond higher CTCs! Basically, I feel it’s a question of following a focused path and celebrating the growth of your employees.

RT: The focus on employee well-being especially during crisis, is important. But, when reporters are involved in secret, dangerous missions, putting their lives at risk – how do you work around these situations?

Ans: This is paramount for us, sometimes even more than getting the story. We make sure that the story or the big break does not come at the cost of putting any individual’s personal security at risk. Where there is a risk, we will never send a reporter alone; we ensure police protection. Whatever is needed, we make sure it is provided, so that the reporter is safe.

RT: Some trends in internal communication are generational shifts, internal social media and terms of engagement. Do you feel this is getting due attention?

Ans: We work with a lot of young people, who are generally 25 – 26 years old. There is a lot of energy and a great deal of ideation. Because it is a young team, there is a lot of investment in training to hone their skills, which would lead to enhanced performance. They are so well informed, so tech-savvy, they want to lead from the front and, sometimes they are guiding us! The terms of engagement are based on this “leadership”, and not the number of work years that they have put in. We don’t believe in being “ageist”. We have people out of college, doing some fabulous writing, and we value that hugely.

RT: Another key metric that internal communicators are examining is turnover, specifically regrettable attrition, which involves tracking the loss of the most valued employees. How do media companies tackle this?

Ans: People out there should know that there’s so much of fresh talent. One leaves and another walks in with a lot more energy! The attrition is visible among the 25-26 year olds, but among the senior people I don’t see it. In my inbox there are eight to ten applications every day, and a good per cent of my time goes in scanning through them. The quality of talent is tremendous! But, on the other hand, it is exhausting too. You train people and they leave for a lesser job but a ten percent salary jump!

We have built in training modules for our employees, and there is constant revision happening, so that our production style does not get stagnant. A lot of new ideas come up in these training sessions.

Eventually the training methodology keeps evolving too – constantly, like a rolling stone!

Be the first to comment on "Media Speak – Ritu Kapur"

Coping In Times of Crisis

Shine on! A tribute to Mihir Bijur