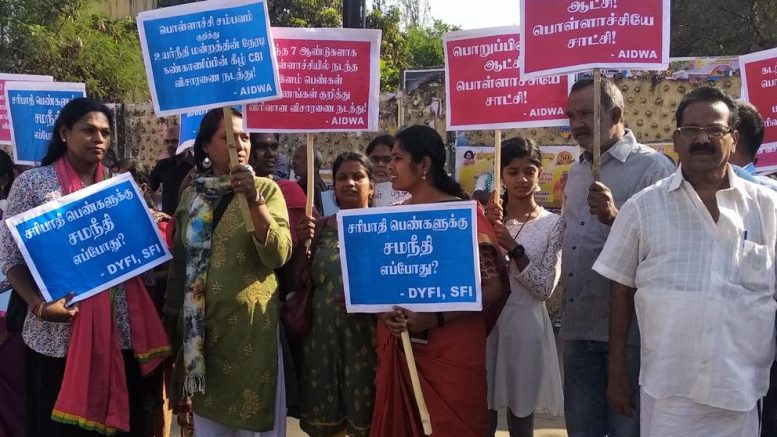 If you are outside of southern India and do not follow Tamil, chances are high that you have either not heard of the Pollachi rape scandal or are not much aware of it. Blame it on the so-called national media, which in my opinion has been underplaying what in some ways can be described as a horrible event of national importance, if you compare it with the so-called Nirbhaya gangrape case or the Uber rape that resulted in nationwide outrage with legal consequences. In my opinion, if a story does not figure prominently in the headlines of prime-time TV news bulletins or the front pages of English language national newspapers, I would call it a case of underplaying.

In the incident, whose prosecution has since been handed over to the Central Bureau of Investigation, several women were lured into friendship traps through strangers they met on social media and then blackmailed into rape using cameras, and involved harassment, forced sex and extortion. When a brother of one of the victims pursued the assailants, the crime came to light, opening a can of worms. The scandal suggests five kinds of biases journalists can be justly accused of. It is somewhat ironic that in the month that has the International Women’s Day, this story has been relatively underplayed.

The story does not lack drama, the kind of stuff news media usually jumps on. The most horrible part is that blackmail videos have made it to WhatsApp and are being viewed in a voyeuristic way. An article in Newslaundry observes that some publications in the South have covered the case that erupted after an incident on February 12 with a click-bait attitude to build audiences, which is a disgusting thing.

Writer Sharanya Manivannan says the “media shorthand for the situation is ‘the Pollachi case’, but with possibly hundreds of people directly affected by it, it might be better to call it the Pollachi crisis.”

I ran Google searches for “Pollachi rape case” and found 161,000 search results. A similar search for “Nirbhaya rape case” got me 25.9 million. I know the latter case is much older and stuffed with years of tracking but I still think the data is indicative enough of media bias. I do not think the national media deliberately ignores such cases but there are certainly five kinds of biases involved here.

News organisations that truly believe that they are national in outlook need to have editors who should try to have their ears to the ground to avoid the above biases. Social media platforms like Twitter can help editors get a hang of what really matters. Using Twitter to influence priorities is, of course, another story.

Be the first to comment on "National media plays down Pollachi rape scandal, suggests five kinds of biases"

Art of Balance in Communications

Shouting ethics in a crowded boardroom