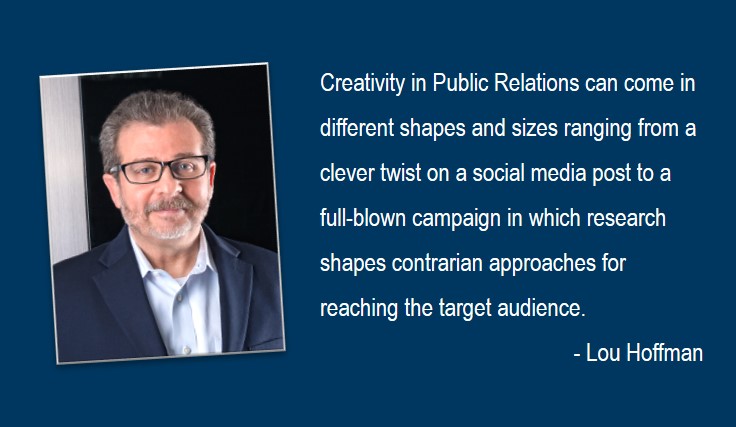 If you asked 1,000 people which profession is more creative, advertising or PR, I suspect 997 would say advertising, with the three holdouts being mass communications university professors. Optimism abounds in academia. I doubt that even PR professionals themselves would grade out their own creativity above the advertising world.

After all, advertising delivers those 30-second TV commercials that tug at the heartstrings or prompt laughter. On the other hand, we’re the profession behind news releases — content that typically reflects a formula and uninspired word choice. While a smattering of PR professionals, both in communications departments and consultancies, aren’t stuck in the mud writing dull news releases, I think it’s fair to say that certain factors hold back PR when it comes to creativity.

Before going further, it’s worth taking a moment to frame this concept called creativity. At the 10,000-foot level, creativity means deviating from the status quo. It means trying something that isn’t part of the standard PR playbook. It means having the courage to zig when others zag. Creativity in PR can come in different shapes and sizes ranging from a clever twist on a social post to a full-blown campaign in which research shapes contrarian approaches for reaching the target audience.

So what’s holding back creativity in PR?

The biggest barrier is that our profession’s best creativity takes place behind closed doors when organisations are conducting PR consultancy reviews. Consultancies recognise that creativity goes a long way toward swaying the prospect to pick them. Unencumbered by deep institutional knowledge, consultancies will serve up ideas with showmanship that would make a carnival barker blush. Unfortunately, there’s one not-so-little problem with this process. These ideas rarely see the light the day. Companies either won’t fund the creativity or don’t have the guts to try something new — in spite of putting a premium on creativity during the selection process — or a combination of the two.

I also think the PR profession tends to attract pleasers, people who gain immense satisfaction from hearing the words, “Well done!” While a maniacal focus to serve is an admirable trait, it also means these same people shy away from conflict and rocking the yacht. If you’re recommending to the executive management team that the company take a different direction with a product launch, no one in the room is going to say, “Well done!” They’re going to challenge you to prove that the creative is worth the risk, an experience that doesn’t fall under the pleasing category.

Last and related to the pleasers dynamic, PR needs to be willing to fight for our ideas and persuade our clients or internal stakeholders that the creative is worthy of their support because it will ultimately produce a better result. For those who rationalise their lack of creativity by pointing out that that the decision makers in companies often don’t have the courage or aren’t willing to allocate the additional budget for creative ideas, I say, “Phooey.” (How’s that for a scientific expletive?).

Yes, it’s true that those governing the communications function and the associated purse strings can be conservative. The Holmes Report and Ogilvy tag-teamed on a study on creativity last year that asked the question, “What stops you or your company from being creative?” From the consultancy perspective, you can see “client feedback or risk aversion” constitute the greatest roadblock. 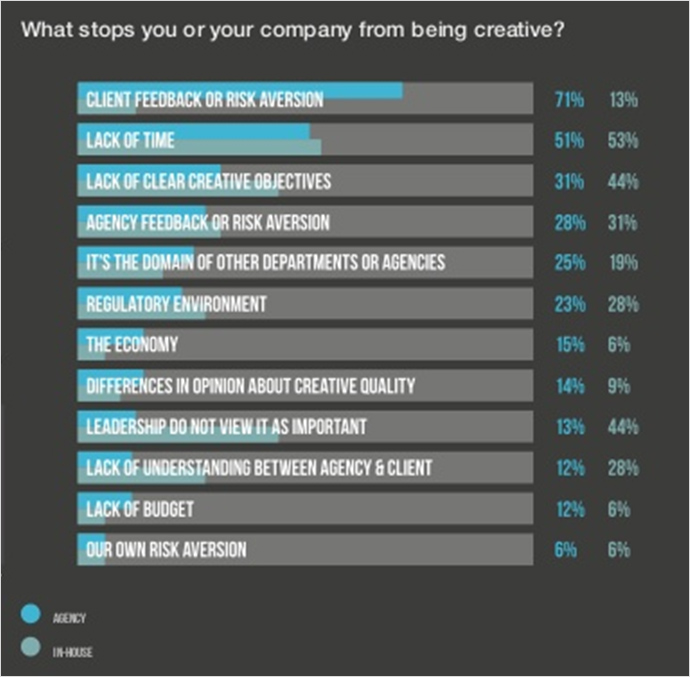 This dynamic isn’t changing anytime soon, but we can’t allow it to limit our thinking. This isn’t just an intellectual exercise. There’s an emotional component to winning over decision makers to a creative idea.

Strength of conviction matters. If you believe it’s the best move down to your right ventricle, others will feel that passion. You might not succeed the first time or the second time or even the third time.

But stay the course, and you will eventually win on the creative front.

Be the first to comment on "What is the biggest barrier between PR and Creativity?"