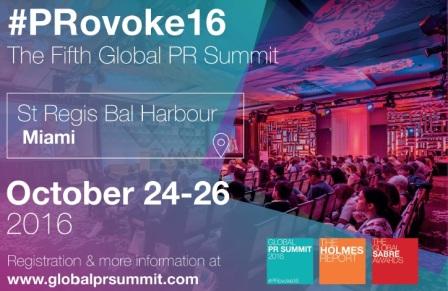 When Hurricane Mathew hit the Western Atlantic and the south eastern United States I took a quick trip down memory lane to October 2012 when Hurricane Sandy in the north east United States disrupted travel plans of the big wigs of the world of PR for the inaugural global PR Summit organised by The Holmes Report in Miami. The dates have remained almost the same and the venue has not changed.

I was fortunate to be part of the first two editions while I was still employed at Edelman Chicago. I could not make travel plans in 2014 and 2015. However, it has beautifully worked out that I can be in Florida to attend the edition in 2016 during my whirlwind 10-day tour of five cities in the US. I’m able to make this trip after a successful fifth edition of PRAXIS – a summit for communications professionals in India I co-founded in 2012. I’m also honoured to be a part of the Class of 2016 of the Holmes Report Innovators 25 list in Asia Pacific.

I have managed to convince half a dozen friends in Indian PR to make this investment of time and money to attend what I think is the world’s finest gathering of men and women in Public Relations. I’m hoping Hemant Gaule, Ajit Pai, Vineet Handa, Sonia Dhawan, Amit Misra and couple of others will find this as worthwhile as I did in 2012 and 2013.

Here are five reasons to attend the upcoming edition –

Paul Holmes and Arun Sudhaman are fine human beings and together they have built a fantastic platform. All it takes is some smart planning to be at this great few days of learning and sharing. I will be there. You should make it too. If not in 2016, then next year for sure. Hopefully the hurricanes will not play spoilsport.

Be the first to comment on "Why attending PRovoke 2016 is such a big deal?"