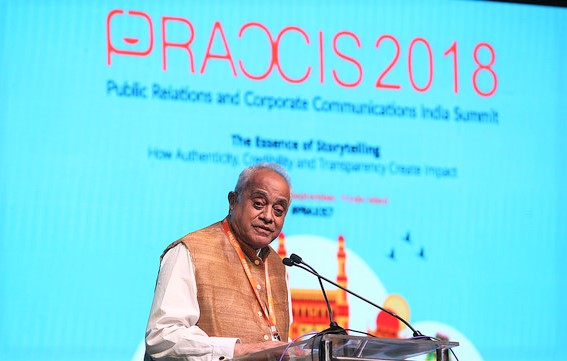 Taking us back in time, into a different world, was Roger Pereira, advertising and Public Relations veteran – on Day 2 at #PRAXIS7 in his keynote address. “I’ve retired from the company but can never retire from work!”  professed Mr ‘P’, a name he was popularly known by.

Initially, he was bent on becoming a fighter pilot and had undergone training, but destiny had other ideas, and on the day of his interview, he was ordered to ‘go home’. His formal career started when he moved into communications – a career that he grew to love. At age 17, he was involved in writing scripts for AIR and Films Division; and at age 20, he got a job in advertising (without any training), as he pointed out. At that time, the challenges were very different – and one of the most difficult tasks was motivating, educating farmers to breed cows and buffaloes, to join the cooperative movement for milk, how to use pesticides (to avoid skin cancers) and so on.

Memorable experiences were a dime a dozen. Like when he got the opportunity to launch many brands such as Mercedes Benz, Citibank, Xerox, Tata Motors, and the “jewel in the crown” – TCS. “We launched a series of Indian and foreign brands – A for Apple to W for Wrigley’s chewing gum!” he recalled. The opportunity of producing the whole Indian story of development to the Commonwealth heads of governments was remarkable; there was work involved with the Indian Defence Ministry and Food & Agriculture too. He narrated the unique incident in the state of Gujarat, when an entrepreneurial venture – Prabhat Poultry, that produced “unfertalised eggs”, was promoted by his company as “vegetarian eggs”! This was “the only advertising /PR campaign in the world – with just one ad in Gujarat Samachar, Janmabhoomi and Times of India!”

Some experiences bordered on the ‘dangerous’ too. Like fighting terrorism in Assam, when ULFA threatened tea gardens, belonging to Brooke Bond. Plus, work included working on both sides of mergers – Tatas & Unilevers, Kirloskar & Cummins and for demergers too! It was indeed, a time of ‘trust’.

In conversation with Arwa Husain, Director, Ad Factors he first spoke about what really ‘inspired’ him then. The challenge of solving a problem was always something he never backed out off; a point he emphasised when he described “the most satisfying experience in the PR world”, which was the launch of the Indica car. “Even before the first ad appeared, the day we announced the price, we got 120,000 bookings with full cheque payments! And, the plant had a capacity of 60,000!” he told us with glee.

Why was there this desire to know more? How does it help as a PR professional, enquired Arwa. He recalled that during his time, Vikram Sarabhai had set up ORG, which helped him in research. “In PR, at that time, he felt there was no such thing as ‘research’. We worked with ORG and today, I am jealous of all of you!” he shared. The connection with research also surfaced when he visited US in 1964 and he actually met Mr Nielson.

As far as Advertising and PR went, he confessed he never saw them as different disciplines. If he had to choose a career today which would he choose? “I’d do both, whichever works! I remember I used to be like a school boy, and get all excited. Of course, I had a wonderful team!”

Did he ever consider writing a book? Many, many times, he admitted. He had worked closely with industry leaders who are legends – like JRD Tata, Indian entrepreneur and industrialist of the Tata Group, Vikram Sarabhai, Indian scientist, innovator  and industrialist widely regarded as the father of India’s space programme. “And they opened up their lives to me, and I was privy to a lot of their secrets!” he confessed. And today, with social media he was scared he would spill the beans! He was on social media, but only as a reader.

A large part of his time is now involved in charity work, giving back to society. He has been “blessed” as he got involved in “Mumbai First” movement (along the same lines as “London First”), and now works closely with the Maharashtra government. Finally, he had some tips for the young professionals. Revealing that the young today, have revolutionised the business, he said “Frankly I need advice!”

He shared some heavy words of wisdom when he said, “If you see opportunity, grab with both hands and do your best like no tomorrow! Stay relevant, keep your ears and minds open, and remember to stay ten to fifteen steps ahead!”

Be the first to comment on "Another time, another place – Stories from yesteryears of Indian PR"

Journalists and PR folks – both sides need to respect each other