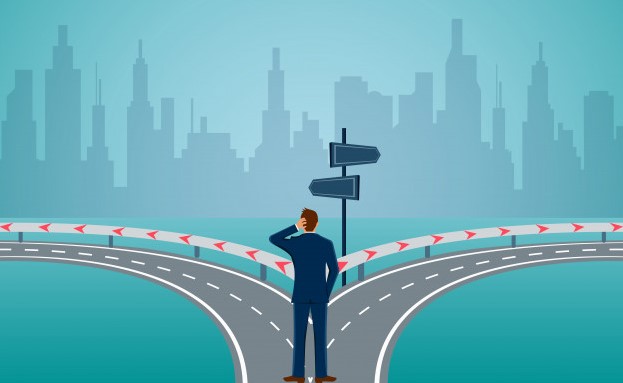 On the flight back to India from Dubai, I was in an extremely troubled and confused state of mind.

I had to find a job in Mumbai, where my wife and son were. They were staying with my wife’s brother and his family…all wonderful, welcoming souls. My wife had tried moving to Pune where we had a house, after her return from Dubai, but that had not worked, so she had come to Mumbai, where she had got a job and my son, a school.

Should I go back to advertising? Should I get back to the newspaper publishing group? Or should I pursue corporate communications, given my recent learnings?

I decided that I would try and be careful about the kind of company that I worked for. No more risk taking for the moment.

To help me, I sought the guidance of 2 very senior corporate communications veterans, both of whom, at some point, had worked for my previous employer in Dubai or his Indian acquisitions. I told them that I desperately needed a job, just so that I could move into my own place, instead of having my wife and son stay with her brother.

Both counselled me that I would be best served exploring corporate communications. It was an emerging area, and an increasing number of companies were creating their own departments.

Two months elapsed and I was still without a job. To be fair, offers had come my way, but I had declined them basis my decision to focus on companies with a good reputation.

One day, two phone calls changed my life. The first was a very senior person from India’s largest business conglomerate, and the other the HR head of India’s then 4th largest conglomerate.

Both interviews were scheduled for the next day. I was excited, but a little nervous as well.

The interview with India’s largest conglomerate went well. However, they were very honest about the fact that they would need someone only after a few months.

So it was that I went for the next interview with the 4th largest conglomerate.

Their HR Director was a kindly senior gentleman, who started the conversation with a surprising question.

‘Are you Narain Takle’s son’, he asked. I was taken aback but nodded my head. ‘I knew him well in Calcutta’, he added.

‘Actually, I don’t know what you folks do in corporate communications, but I will set up a meeting with the Chairman’, he continued.

After a few minutes of chatting about how my father was, I was asked to meet the GM – HR.

Sitting with him was extremely comfortable and reassuring. But what he told me while we were both smoking our cigarettes (those days, one could smoke in offices) was not as reassuring!

‘Atul, actually we have already made an offer to someone else for this position, so if that person declines, and the Chairman likes you, the job is yours. Just give me a few minutes and I will take you to the Chairman’.

Five minutes after waiting in the reception area of the Chairman’s office (which looked like an art gallery), he personally came out, and greeted me, while introducing himself. I was really taken in by his warmth and cordiality. It is only after we stared out chat that I discovered how well informed he was.

‘Atul, I am given to understand that you have a problem with the editor of the leading business daily. Apparently, you had written him a mail from Dubai casting aspersions on one of his journalists. Is this true?’

Still not fully versed with the ways of corporates and the homework they do, the question was a surprise. However, I told him what the facts were. (It was later that I discovered that he and the owner of the leading publishing group were great friends).

A few minutes of small talk followed, after which he asked me another question.

‘Atul, how are things with your previous organisation’s business? Can you tell me something of your Chairman?’

I was on alert! But had the presence of mind to say, ‘Sir, with due respect, your group also had business relations with my previous organization, so you must be knowing more than I do. Also, you have not yet offered me a job, so it will not be ethical on my part to share information about that company’.

He had a broad smile on his face when he heard that, and said, ‘This was the answer I was expecting. Please join at the earliest. And please rebuild your relationship with the largest business daily.’

The other person who had been offered the job did not take it, and I was given the appointment letter.

I have stayed on in the corporate communications and PR business ever since.

Be the first to comment on "At a crossroad, and a very interesting interview"

Defence? What is the game plan?

The power of storytelling – Part IV