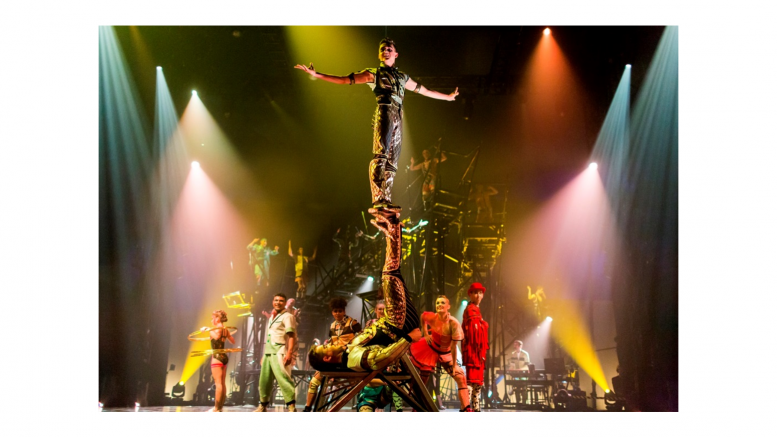 When Cirque du Soleil, the award winning and the largest contemporary circus producers in the world, came to India (Mumbai), we immediately made a short family holiday plan, a break from work in Bangalore and into one of the most enthralling shows.

We chose the show called ‘Bazaar’. Circuses have the ability to mesmerize at the magnificent wonder of our own human abilities; Cirque du Soleil is strictly a human only performance art – no animals are used in their shows. To witness a circus is to go back into your childhood. Nostalgia seeps in when we enter the circus tent which has a dream-like quality that makes you forget the daily grind and get into it with a child-like curiosity and openness. As my family and I took our seat, for two hours, we were completely immersed in the mesmerizing experience of sights & sounds and the flawless performances of the artists.

During the show I also realised that to pull off a show of this magnitude, there are two ‘parts’ that we must all play to make for a flawless experience: The Star and the Supporting Role

The show had at least 20 performers. Each with their own special talent and one as good as the next in their own field. There was an expert cyclist, a contortionist, a ballet dancer, an acrobat, a stilt-walker and more. In the whole rigmarole of a performance, each one got their opportunity to be the star of a particular sequence where their talent was showcased akin to a primadonna in an opera. Each one made sure that they brought in their best act, adding a lot of chutzpah to the whole two hour performance.

A parallel of a phenomenon like this in our workplaces is when we have a big project or an event to handle, we have various experts that come in, each one of us with our own definite expertise. We rely on the skills of the experts to fulfil the requirements for the project. Every expert gets a chance to lead, ‘perform’ and shine. Any kind of non-performance on the part of the expert be it lack of motivation or latest know-how could jeopardise the entire project, leaving others in a fix and causing disruption of the project itself. Therefore, it is important as experts that we take responsibility of honing our skills and showing up with it to offer solutions and counsel when needed for an amazing, note-worthy event.

I noticed that when one of them were doing their act, for instance, when the acrobat was at it, twisting, turning, falling, rising and doing his varied acts, the rest of the performers were making completely sure that the acrobat doesn’t get a chance to falter or fail in his act. They were the same experts, stars in their own sequences, who set aside their primary talent to get into the team spirit and become the supporting crew. Not only were they supporting the acrobat’s performance, they were also there to set up the stage for the acrobat’s performance, laying the carpets, the ropes, the cushions et al and later to clean up after the act to ready the stage for the next sequence.

The lesson in it for us in our corporate world is when we are involved in a big project, we do offer our expertise but sometimes fail to see the goal we are collectively trying to achieve. While we should play a leadership role where we have/want to, it is also important to share, enjoy, cherish, celebrate and support the other team members as well, so that the whole project succeeds.

While the team leader or the project manager takes up the final responsibility of putting up a team together, it is also in the hands of the team members to play their part to the best of their ability, bring in their expertise and double up as a team member for other experts.

Be the first to comment on "Cirque de Soleil – what do you bring to the table?"

Creating Value one client at a time…

It’s not High, till its Achieved!