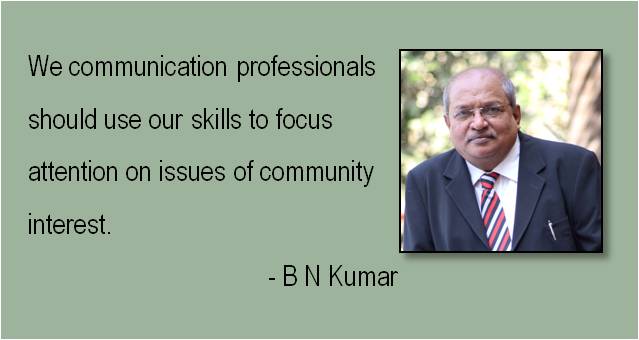 A communicator is a responsible citizen first. While fulfilling our professional engagements, we can always look for contributing to the society around us. It’s not about CSR and the much misused cliché – ‘we owe it to the society that has given us so much’.

As organised professionals, we public relations and advertising (and media, HR) practitioners keep participating on various platforms addressing the issues that concern us. Be it the challenge of new media or disruption we involve ourselves in exchange of thoughts and make presentations and to that extent we do contribute to various causes – our own causes.

Occasionally, we also join the bandwagons such as Swachh Bharat by sweeping our own office complexes (which are otherwise as sick-and-span as the fort compound in Bahubali). We do advise corporates on picnics with a purpose, but how many of us actually join such endeavours? We also design CSR projects, but do we contribute to them from the bottom of our hearts?

I am not discussing our donations to NGOs that too with the aim of getting tax exemption certificates or participating in selfies-oriented events.

We have the power – the power of communication. And we are aware of the fact that anyone with a smart phone is a potential broadcaster!

As school and college kids, we spent quite some time in NCC, Scouts & Guides and NSS (National Service Scheme) which are designed to build a sense of community service. But we seem to forget what we learnt once we join the professions of our choice. The daily rigmarole and rat race apparently overtakes the compassion factor in us. Right? I too have been a victim of this syndrome.

Today I have realised that we have the most effective arm that we can use for social well being – the art of communication. I would agree with what humour-satire columnist Busybee (late Behram Contractor) used to say that it was not the job of journalists to take out morchas and cause traffic jams to voice protests. They have the power of writing to express themselves. We Public Relations professionals have that tool too.

We can use our skills and, more importantly, our presence of mind to focus attention on issues of community interest. It could be the overcrowding of local trains and city buses, issues in aircraft, destruction of environment, child labour at restaurants and tyre repair shops, spitting in public places, long queues for utility bill payments or an NGO doing some good work – we can click pictures and shoot videos and post on the alternative media. We can even form groups for various causes.

A case in point is PRCI which has taken a cue from Prime Minister’s latest Mann Ki Baat message to observe the World Environment Day on June 5 and spread the message – Connecting Nature To People. PRCI has taken up the cause of plundering of Parsik Hills in the name of quarrying. The once picturesque hill range today presents a pathetic site with huge destruction and damage done to the nature. 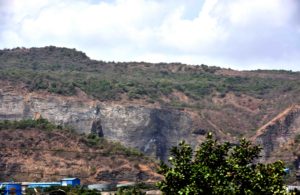 At the risk of plugging PRCI, I am happy to report that we have received support from four top NGO – Sri Ekvira Aai Pratishthan, Watchdog Foundation, Vanashakti and Awaaz Foundation. Together, we are just communicating to the world: #IamParsikHill & IamDying. The campaign generated considerable media interest.

One may ask, isn’t quarrying a necessary evil since we need raw material for construction and road repairs? Yes, but it could be done outside the city in a planned and regulated way and certainly not the manner in which we allowed Parsik Hills destruction.

Last year, we ran Mission Mumbai Local campaign to focus on the woes of suburban commuters and we have won America’s PR World Gold under PR Milestone category.

I seriously think that we must communicate for a cause and periodically contribute our wee bit to the community around us and be responsible citizens. We owe it to ourselves, and not the society!

2 Comments on "Communicating for a cause"

The Ides of March and a riot of colours