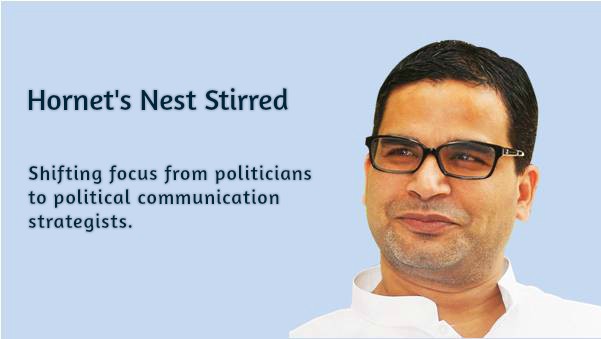 All it took was one person to shift focus from Politicians to Political Communication Strategists. Some say he structured it and gave a definition to the sector while others are of the opinion that he has just redefined it. For some – he is an inspiration, for others – a challenge. Accept it gladly and offer a seat to him. Or don’t. But he is here with a double bang and has spared none from feeling his presence. A rock has hit the calm waters and waves are pushing the shores. Let’s explore the height and strength of the waves and analyse what all has been washed off, and what’s more to go!

In an attempt to collect quotes, interviews and stories on the star political communication strategists of India, I am on the verge of claiming for a doctorate towards my one of its kind research. For now, the issue in your hand is no less than a PhD for me. Do I hear you asking for the findings? Well, they are as complex as the Indian political scenario itself.

Going through several stories and personal interactions, the first thing I noticed is that, in India, a Political Communicator is no more abbreviated as PC but as PK. The new age Chanakya, as he is called, has literally revolutionised the political communications scenario in India.

Prashant Kishor’s appearance from nowhere and his journey so far has been discussed a lot. What I wanted to delve into are the intricacies of his job and work style, and track the trajectory. While nobody denies his grand entry and later ascension, the veteran communicators certainly question the sustenance.

Elusive is the Word

Here is a man who has been in business for almost a decade now. His success rate, as it is till date, has been 100 percent. Demand for him has seen no dip ever since he took off. His rise is not willing to accept any height as a pinnacle. Well if all that isn’t sufficient, what could be?

On top of it all, the man who has grown from being ‘talk of the state’ to ‘talk of the nation’ and whose demand is growing past the boundaries of the nation has always been elusive of media. That’s his style and am sure he has a logic for that. As far as I could understand, all those in the same business try to be in the limelight, network more and build personal relationships. Well, that’s how you get more business and also gain the efficiency of doing it better. But this man breaks all norms and swims against the tide. And he can afford to do so as business lines up at his door, and so does the network.

Trick of the Trade

The key to success in political communication, as they say, is – keep yours on the ground. It’s difficult to fathom the connection between a helicopter strategist – who may be least aware of the local dynamics leave aside understanding the local language – and a grass root campaign. We know that the party worker is the best ear. But till the voices recorded by them are not collected well and churned proficiently by a team of specialised experts and conclusions are humbly accepted, nothing is gained. Campaigns drawn well, riding on the strengths, result in success. And repeat even.

I doubt if politicians learnt any lesson from the 2014 General Elections. And if they did, little wonder if they still remember them. But one lesson will surely remain fresh and sustain. Hire a technically sound professional to lead a war room full of communication professionals and people from IITs and IIMs. Don’t question their ability and dare not try to understand what they are doing and why they are charging what they do. Well, at least Prashant Kishor has done that one good thing for all those claiming to be political communicators. Made their life easy, got them a good raise and opened avenues for many disenchanted political journalists and communicators. Professionals in the field owe him big time.

More of his know-how on winning elections and what influences Indian voters is soon to be published in the form of his debut book – The Election Game.

As elusive is Prashant from media, so are his ambitions to the world. At this moment, it’s difficult to understand what this man is upto. There are mixed views about his objective. His close associates think of him as someone who is not working for money at all and has no political ambitions as well. Colleagues consider him to be working with the sole aim of bringing good and accountable leaders to public offices.

Narendra Nath, a senior journalist who spent time with Prashant during Bihar elections is of the view that he is on track to set an entity in this nation that would offer one-stop solution for political campaigning and communication. That’s on the lines of specialised consultancies as they exist in western countries.

If commercials and power are not things that are fuelling Prashant, then his zeal could only be attributed to retribution. It’s a known fact that the relationship between Modi and Prashant went sour post 2014 Lok Sabha elections. Rumour has it that Amit Shah and Sangh parivar are to blame for it. Post that, Prashant has worked for and is expected to take assignments of other parties. Incidentally, all his campaigns will go on to hurt BJP.

For all those communicators and allied professionals who are in the business of political campaigning, Prashant has not just shown the way but has also opened the golden gates of opportunity. By far, there is just one Prashant Kishor in India and only one party would have him for each election. Others will certainly have to learn to survive and find the next best available. Soon enough there will be many Prashant Kishors available to choose from. Some may even grow to be better. But as of now, he’s the first and the only man standing on the platform built by himself.

Whether Prashant Kishor will end up to be just a chapter in the Political Communications history of India or will he be writing a new history altogether is for time to tell. 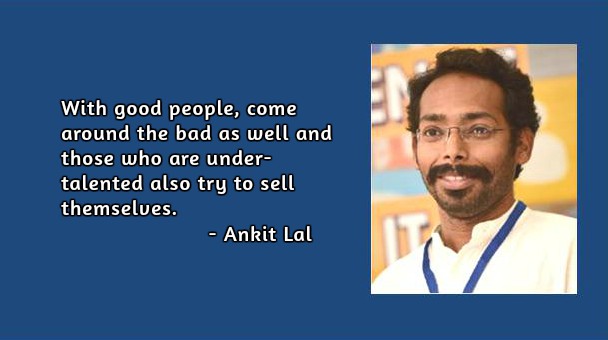 Aam Aadmi Party is stated to be the result of the Anna movement. The movement became as big as we know of it because of social media, and later the electronic media. Ankit Lal is the man behind the impactful digital strategy for the movement and later for the party. Engineer by profession, Ankit took leave from his job to join the Anna movement. And now, he is the founding member of AAP, heading its IT and overseas communications wing. A tete-e-tete:

RT: What inspired you to join politics and what is the force that keeps you motivated?

Ans: People’s confidence and their expectations made us take the battle forward. More than half my family is settled abroad. I could also have shifted and lived a comfortable life. But when I started taking this movement forward and calls from all corners of the world started pouring in appreciating my work, I got motivated to keep going.

RT: What’s your observation on the political scenario in India?

Ans: In India, the political communications scenario is quite rudimentary as of now. We are still following what the West did in late 60s. Just that we are doing it with the use of photoshop and other new-age tools. A recent example is that of the posters of Bahubali inspired Jayalalitha during Chennai floods. Such ideas were picked in other countries in the 60s, when Political Communications was not as well-defined.

RT: Don’t you think that the entry of people like you and Prashant Kishor has brought along an evolution in Indian politics?

Ans: Prashant is doing a nice job. But the problem is that he works as a political mercenary. Anybody can hire him, pay him, and get his job done. Until you are in sync with the ideology of a certain organisation, you can’t catch the pulse of your leader. That’s lacking here.

RT: There could be an external support system helping do a campaign and then there can be an in-house expert and his team that does the job for the party. What’s the difference and what are the repercussions of the same?

Ans: As someone hired externally, you get paid to do a job within a given timeline. This largely limits your scope of work. When someone from within the organisation does the same thing, it’s more in sync and real. External professionals are hired in view of the work they have done but sometimes the association goes awry. This has a long term bearing on the party image. For example, Modiji hired Prashant Kishor. He did a certain kind of campaign. But now it is hurting because the party is unable to live by the high standards and expectations set by him before the masses.

RT: Next big elections for AAP is in Punjab. Reports are that Prashant Kishor is to steer Congress’ campaign there. Are you ready for it?

Ans: The question is if he is ready for it? Any intelligent person who would go to Punjab will advise Prashant not to get into it. What we do is just an add on to what happens on ground. There can be only a 5 or 10% plus or minus perception change that we as communication professionals can effect. You can’t totally turn around the ground reality.

RT: Do you see the role of communicators going beyond campaigning?

Ans: It has to move beyond campaigning and become part of the overall discourse eventually. A communicator playing a role in governance is an evolution and a major recognition for his work.

RT: What is that one thing which gives you an edge and that level of confidence?

Ans: What gives us an edge is the last one-year data that we have collected in the state. We are far ahead of them.

RT: What is the strongest point of Prashant Kishor?

Ans: Ground research. I very well know his brilliant team members who do that.

RT: Do you see more engineers like you and other professionals joining the political bandwagon in future?

Ans: Political advocacy will undoubtedly become much more prominent in India. But people like us will have to decide how to sustain without getting corrupted in the political scenario. In our party, we are all volunteers. Thankfully, my wife earns well as a media professional; that helps. Parties and politicians are certainly looking out for professional communicators. However, like with any business – with good people, the bad also come around. Those under talented are also trying to sell themselves.

The courage to be disliked

Schmooze & schmaltz – not the best way to grow in Public Relations