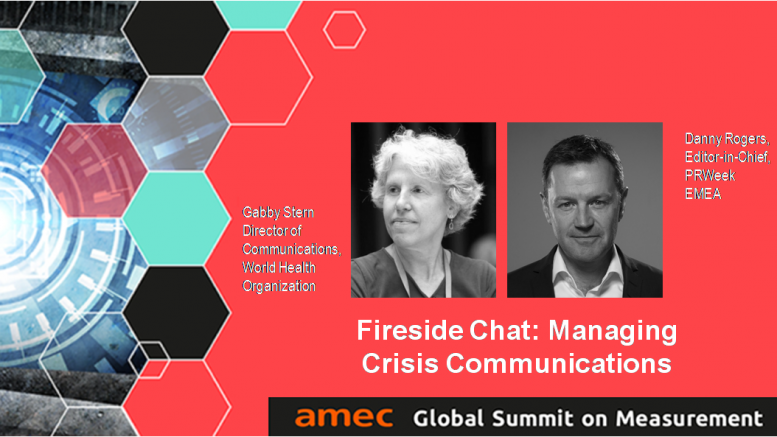 Crisis awareness and preparedness for crises is something that businesses should include in their master plan. They must be prepared for a PR crisis, for it can surface anytime. There can be any mishap or setback like – executive scandal, data breach, negative review, wrong message in ads, an event that bombed, a flawed marketing campaign and so on. When hit by a PR crisis, the brand needs to roll out a timely, carefully crafted response, because crisis times entails protecting your brand reputation.

Today we are faced with the biggest crisis the world has ever faced, which has no precedent. And we have seen a line of ongoing crises that have been filing past in different countries –  the flow of refugees, the spread of communicable diseases, cross-border military operations and more …all of which have been under the moving radar of World Health Organisation (WHO). The conversation between Gabby Stern, Director of Communications, World Health Organisation and Danny Rogers, Editor-in-Chief, PR Week UK threw light on what was happening

Representing WHO, which is in the midst of a lot of tug-of-war action right now, was Gabby and as  Danny enquired how has the experience been in this really unusual period that we are experiencing, she disclosed that there was a lot of conflict in the communication. She stated very clearly that “Our mission is to save the vulnerable”. The experience has been intense and there are hundreds of sequels to pick up. From March to December last year, it was a “learning curve”; then by December 23 when the news of an outbreak in China exploded into the world news, she pointed out that they have been “working non-stop”.

What was the communication objective set by WHO? This was both easy and hard, as she put it. With a highly skilled and dedicated Communication Department, the team knew from Day1 that they had to reach people quickly with messages that were evolving. They needed to cover many demographics which talked different languages. They actioned virtual events with sports stars and celebrities, created funds for poorer countries and so on – getting very innovative, creative, ambitious on every engagement. “All this gained a lot of coverage in traditional and digital media too. We’re still learning every day!” she exclaimed.

Learnings from the experience

COVID-10 has changed the global landscape. The pandemic has disturbed the political, social, economic, religious and financial structures of the whole world.

What were the learnings from this experience? If you thought, how many friends you have out there, you would indeed, be flattered – like we were in the first few weeks itself, she remarked. CEOs reached out and called her – that was “incredibly heartening”. This was a huge “surprise” element but the global response was complex, as the disparate reporting were making people confused. “Everyone was so stressed in their personal, professional lives and many journalists felt the need to rush stories out!” she outlined.

The learning for WHO in the communication journey, is that they are now trying to make a difference and create an impact. Having spent more than three years at the Bill & Melinda Gates Foundation, she realised the importance of doling out accurate information. She insisted that they are at the beginning of a journey and are putting in dedicated research, even partnering with experts and trying to learn from them. “Listening is a huge priority. Now we need to listen and understand what people are going through, so that we can help them,” she reasoned out.

A lot of conflicting news keeps floating around. It’s not a new phenomenon – coming across distorted information or misinformation, ‘fake news’, hoaxes and so on.  Today, the difference is that digital technology and social media spreads disinformation which implodes at an unprecedented speed and reaches audiences far beyond the traditional boundaries.

Since the beginning of the COVID-19 pandemic, we have seen parallel outbreaks of disinformation and misinformation about a range of issues. So, whether it’s about the virus or vaccine, ranging from fake coronavirus cures, false claims and harmful health advice to way-out conspiracy theories – it’s all out there. Unfortunately, disinformation can, in turn, speed up the spread of disease, foil effective public health responses, as well as create confusion, fear and distrust.

The scene has been ridden with a barrage of news – some countries have remedies, people who are worried about the invention of the vaccine. And, at the background when politics comes in, political forces have an agenda. “We work entirely to combat all these and get facts out to the people,” she explained, and added – “We are in the communication department, which is like a huge clearing house!”

Looking forward, is there an ending in sight? Are there different objectives added in the WHO communication plan?

We really don’t know what will happen, and there has been a second wave in some countries; one hopes that there will be an end point in the pandemic, she shared. But, the focus of WHO remains fixed on COVID communications. And when the pandemic starts receding, it won’t really be the end point. The need to communicate – putting health up in the agenda will be forefront, which even Danny assured is an important objective. “Health has to be prioritised and we will communicate that, even after the pandemic,” affirmed Gabby.

Recently, she had tweeted – “There’s a sizable gap between our mission, and the resources and powers vested in us. What my hard-working, highly skilled, big-hearted colleagues accomplish every day is extraordinary”. We know that for sure now, and wish her all the best!

Be the first to comment on "Fireside Chat: Managing Crisis Communications"

The Power of Sharing Stories!