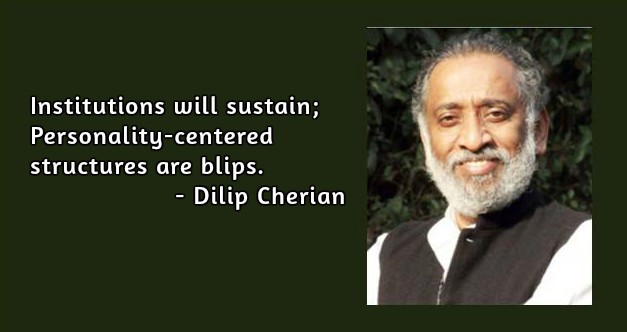 Dilip Cherian – the prolific political analyst and co-founder of Perfect Relations – is widely referred to as India’s ‘Image Guru’. In a candid interview with Lovejeet Alexander, Cherian speaks his mind on the emergence of new age political communicators and their future.

RT: From the days when you started off to this day, political communications has come a long way. How do you see this journey? Is it just the tools and channels that have changed or there is much more than what meets the eye?

Ans: I would say that it’s good to look at what has changed but it’s equally important to see what has not changed. It is the extreme expectations of the electorate. What has changed is how political parties are seeking to address that. Most of the time we focus on the need of the client. In the last few years, we flipped it around and tried to tell parties to talk about what hasn’t changed and how to address those issues. Nowadays, parties are making strategies that are more sharply focussed on need fulfilment.

RT: Do you mean that communications strategy has moved towards more realistic promises?

Ans: I think that the electoral victory is a triumph of selling hope over perceived reality that remains constant.

RT: What are the major shifts in communications strategy planning then and now? We’ve seen the focus of communications shuttling between personality centred to vision driven. What works the best and when?

Ans: The bigger shift is from issue based elections to leader based presidential type elections. We have seen that shift happens. Is that shift stable? My sense is – no, it’s not. It’s going to hover between one and the other for some time till we figure out a bigger reform in our form of electoral choices. The difference is that when the regional parties are in play, it’s personality driven all the way. When national parties are in play, they want a fig leaf of trying to create the sense that issues are more important than the people.

RT: Of late, we have witnessed uprising of new and specialised consultancies that claim to make or break governments. How do you see the trend? Why couldn’t established firms grow to be that strong?

Ans: Part of the reason is that established companies in the PR business recognise that this business is once in five years or at the best once in three years. And you have too much of committed staff that has to have a regular day job. The second reason in my opinion is that the kind of agencies that are now finding traction in this business are those that are doing social sector PR for the government departments. And that’s what the regular PR companies have ignored; that’s a mistake they have made.

RT: A number of such professionals or consultancies aren’t growing. The options for political parties and personalities are still very limited. Will the situation change anytime soon?

Ans: For the last 15 years of my career in public relations, I have been almost a sole voice saying that specialist companies are the future. And which is the reason why Perfect Relations has this bouquet of five different brands (standalone companies) under which we work. The reason is that specialist companies are where you can invest in specialist skills which result in specialist media. And I think that pure political consultancies are those that focus on by-elections, state-wide municipal polls, state elections and national elections. If they can offer that entire thing under one umbrella, there is room for several consultancies in that space.

RT: It is said that if the communications strategy fails the consultancy is to blame. But if it works well, the client gives no credit. Do you think that the recent case studies will help them change their mindset?

Ans: Politicians are as guilty as entrepreneurs in the launch phase to blame somebody and keep the credit for themselves. I wouldn’t put politicians as a separate category of clients. For us as a consultancy, we follow the philosophy that win or lose we remain below the radar – that’s how we like to be. The recent case studies are not generic. Parties will continue to make the same mistake.

RT: How is political communications different from advocacy and lobbying?

Ans: Political communications is much more upfront. Both advocacy as well as lobbying are things that take time, and don’t have a finite time horizon to be successful. They always have to be a mixture of above the radar and below the radar. In advocacy, you sell more by your conviction and knowledge than in political PR.

RT: An incident that took place five years ago led to a large consultancy shutting down. Is this seen as a turning point for the community and people involved in political communications in India. What’s your observation and what has been its effect overall?

Ans: Whether it’s the example of the recent victory or it’s the demise of a consultancy, I think these are blips – structures which are not built as institutions but are built around individuals. If you don’t have an institutional structure none of these structures are immune to huge bouts of self aggrandisement and annihilation. Either can happen. The lesson is that it’s the skill of building an institution rather than building up an individual personality as the institution’s face.

RT: Many of the political communications professionals have shown interest in joining politics and many are already part of parties now. How do you see the trend and what’s your take on it?

Ans: People must make up their mind on what they are. A segway from one to the other can’t happen overnight. Being a successful communicator is not a sufficient condition to being a successful politician. It is just one of the ingredients.

RT: How was political communications as a career option back then when you started with and how’s the scenario now?

RT: Is it difficult nowadays to get manpower that understands political communications or has interest in the genre?

Ans: There is skill shortfall in all of PR. And the biggest skills that there is a shortfall of is the comprehensive ability to understand data and to write it out in multiple formats. That skill is true whether you are in political consultancy, brand consultancy or technology consultancy. That is the biggest skill gap that exists and it exists because it cannot be taught post college.

RT: What is the skill set required for someone to be a good political communications strategist? Any tips for those aspiring to make a career in this field?

Ans: The key is one’s ability to comprehend large quantities of material and convert them into communicable material at very short time frames. If you want to be the one, give up the dream of having weekends and of not living your work 24 x 7. During the period of a campaign, you don’t have a life.

Be the first to comment on "Guru Speak – Dilip Cherian"

Covid-19: Resumption is fine, but dont jump into Resolution just yet

What is a marketing communications strategy all about?