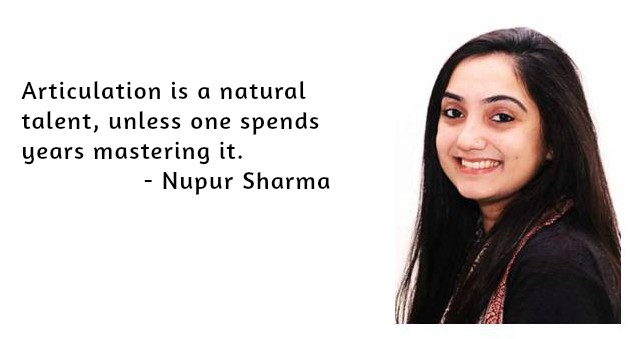 Nupur Sharma – the BJP spokesperson – is well known for her ability to take head-on debates with leaders from opposition who many a times come with an experience more than her age. But that’s no deterrent. Lovejeet Alexander, in a rendezvous with Nupur, tries to find the nuances of her job and tips for aspirants.

RT: How easy or difficult is your job as a representative of the party in opposition in the State but in power in Lok Sabha? Do you have a say in deciding the line of communication that the party picks or is it just a decision conveyed that you are expected to follow and find your own words to defend?

Ans: When you are in a UT like Delhi, the pressure is more because you are expected to communicate and explain to the electorate the legalities and the power-dynamic difference constitutionally between a full-fledged state and a UT. It also helps when the local government lacks in services wherein the central can be shown as the more caring and well-meaning government through its policies i.e., the party in opposition in state is the party that cares more. As for the line, we all pitch in with our respective suggestions. But, quite honestly, in Delhi it’s as simple as following and defending the law of the land – which, as is apparent, the Delhi Government is adamant on disobeying in all respects.

RT: You’ve been a spokesperson of BJP for quite some time now. How has the experience been and do you think anything including party’s communications strategy has changed after coming to power at the centre?

Ans: I am actually the Media co-convenor both for Delhi State BJP and BJYM, but double as a media panelist as and when the party requires. Being a lawyer helps in arguing and being articulate on television. But honestly, sometimes the unnecessary fighting during debates – which you have got to do if you want your point to be heard, can be quite draining. Well, quite a few of our star spokespersons are either elected or are in the cabinet today, and are thus busy with constituencies and work. The immediate challenge was to fill the void, but luckily there is no dearth of talent in the party. Also, unlike earlier, now we also have to keep the government welfare schemes in mind while participating in discussions – the responsibility of spokespersons is definitely more than pre-2014 Lok Sabha elections.

RT: Have you ever faced a situation where your personal views on a particular issue clash with that of the party line? How do you handle such a situation?

Ans: Well, I am in the party because my views match with the party-line – it is quite simple as that! But I do choose the debates that I go for. For example, the MSM today wants to involve the government or political party where neither are required to have a stand. So, personally speaking, I instinctively know where the party will take a stand and where not and what the stand will be, if there is one. That helps.

RT: There must have been incidents when you would have got irritated with news anchors on live television shows. How do you deal with them?

Ans: Since anchors and moderators do call the shots, it’s kind of difficult if their bias is apparent through the show but I am hardly one to back-down. So I make it a point to be heard in case my voice is being scuttled or when I am clearly given lesser time than the anchor’s chosen spokespersons.

RT: Does being a woman get you to enjoy some benefits and have an edge over others or it’s the other way round?

Ans: Neither. Being an educated woman helps as it also means I can work in off-the-field, intellectual activities of the party. But work is work in a set-up as democratic as our party which promotes both genders equally and fairly. Thankfully, BJP’s culture is super disciplined and very respectful towards its women workers and the party ensures that we don’t have to face unnecessary troubles only on account of being women.

Ans: My advice is – in politics, work and a serious attitude towards it is the only mantra which works. Be loyal to your party, and be flexible and adjusting to mix with all sorts of people. Be ready to travel far and wide, rural and urban, to truly understand India. Believe in the ideology you are working for and keep at it.

Most importantly, you must naturally have a sense of service to help people to be good at your job and nothing shall come in the way. Fame and success will follow, as I truly believe that if it’s the other way round, it is probably going to be short-lived.

RT: It’s a common view that central government needs to involve more brains to produce better and early results. You are one of the names that’s surely to be considered for governance when time comes. If given an option what would you choose communication or governance? Why?

Ans: Actually, some of the best brains are working for the government already so I seriously don’t know who these people making these opinions about the central government are. As for your second question, everything has a time and place. And the more time one spends doing something the more likely is she/he to attain perfection through experience. My job is to serve the country and party to the best of my abilities and since my seniors in the party have way more experience and understanding of the field, I leave all these decisions to them. It is communications for now and perhaps when they feel that I am ready for it and the time is right, the job will switch to governance.

RT: At times it’s apparent that the party’s communications strategy is being guided by third-party influencers and supporting organisations. Bihar elections is one recent example. What best can you do in such a scenario?

Ans: Everybody gets involved in electioneering – be it behind the scene war-rooms or party leaders and workers – with an intention to win an election. But it’s politics and in electoral battles you win some and you lose some. All parties have to introspect from the experience, which (mind you) happens even if you have won an election. However, as an individual part of a large collective, if I personally sense something amiss, I simply communicate it to my seniors and discuss possible course-correction or trouble-shooting techniques. Or, if I have the power and wherewithal to handle it at my level I do it myself.

RT: Delhi and Central governments have a love hate relationship. How do you see this going forward and do you think it’s tarnishing BJP’s image and are spokespersons having a hard time to defend?

Ans: Actually it’s an all-hate relationship being meted out from the state to the centre. I honestly believe that the AAP Delhi government and its convenor (the Chief Minister) haven’t been able to come to terms with the 2014 Lok Sabha loss – the language used against the PM of the country is enough proof of one’s intentions and feelings of hatred. On the contrary, all this tamasha is reflecting rather poorly on the Delhi government, since all the principles and tall claims used by them to come to power in Delhi are exactly what they seem to be defying and fighting against today. Be it their support for corruption, corrupt officers and netas within AAP, VVIP racism or non-delivery of ALL the tall promises, doles and subsidies as mentioned in their 2015 manifesto.

RT: Do you see there is a need of structured talent hunt and grooming for the next line of spokespersons? Is there any plan of doing so within the party cadre?

Ans: Articulation, I feel, is a natural talent unless one spends years to master it. I am sure the party leadership is already at it and as I mentioned earlier, there are workers like me who are advised to participate as and when it deems fit or necessary to communicate the party’s line. And then assessments happen amongst the large talent pool. Let me simply tell you that nothing misses the leadership’s eyes – more than we think we know they are all clued in.

Be the first to comment on "Communicator Speak – Nupur Sharma"