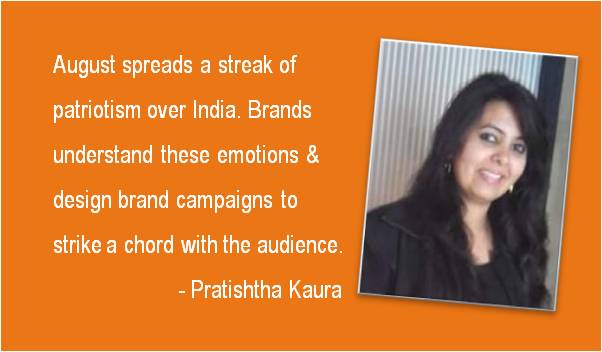 The month of August spreads a streak of patriotism over India. Brands understand these emotions and with their brand campaigns are able to strike a chord with the audience. This month as India celebrated its 70th Independence Day, there were some impressive brand campaigns that left a mark on us. Let’s have a look at them.

The campaign gives out the message that behind every soldier, lies the unconditional love and unwavering support of an even stronger family. The video received more than 10 million views on the brand’s YouTube page and was also promoted on Twitter.

My personal favourite, the video by Bajaj Avengers gave a thought-provoking message of independence for women in India – where a woman is riding the motorbike usually considered as a stereotype and true independence for her will be when she can do whatever she wants as per her choice. It ends the powerful message from Mahatma Gandhi, ‘The day a woman can walk freely on the roads at night, that day we can say that India has achieved independence’. The film has clocked more than 11 million views on YouTube.

Micromax rather came with a campaign that challenged the way we celebrate and protest our national flag – Tiranga. The public awareness campaign saw the creation of a video which takes a dig at the way the small flags are created that promotes the shameful acts of child labour, creating non-biodegradable waste with the use of plastic and disrespect of the flag after the Independence day.

iD Fresh Foods came up with a digital campaign that to create awareness about the plight of the families of our army martyrs, as well as encouraging the public to pledge their support to the well-being of these families. The initiative will be jointly taken forward by Directorate of Indian Army Veterans (DIAV) and iD. The focus of the digital campaign is to encourage contributions that will be used towards helping the education of the children of our martyrs.

UCB came with a heart-warming short story – HIND, in collaboration with Terribly Tiny Talkies. The video is based on a true story of Noorul Hasan, a devout Muslim from Lucknow, who lent a part of his home, and all his support thereafter, in rebuilding a temple. The video was shot across the beautiful city of Lucknow, and random roads and bazaars of Lucknow.

Ambuja Cement, a cement manufacturing company known for the strength of its cement, created the video known as “Salim aur Shankar ki Kahani” that makes an appeal that some walls need to break down so that other bonds are sustained. It is using crowd sourcing to send in many messages that foster the image of community bonding.

The way Patanjali has used influencer marketing to establish itself as a brand across India is noteworthy and while that calls for another blog on this strategy, it also came with an ad film that talked about how using Patanjali products is celebrating the days of independence. The ad boldly attacks its multinational rivals and gives out the message that by using Patanjali products, one can revive economic independence and promote Swadeshi movement.

Thinking of some other Independence Day campaigns that left a deep impact on you? Share with us – in comments section below or tweet to me @PR_wali

Dealing with a Difficult Client