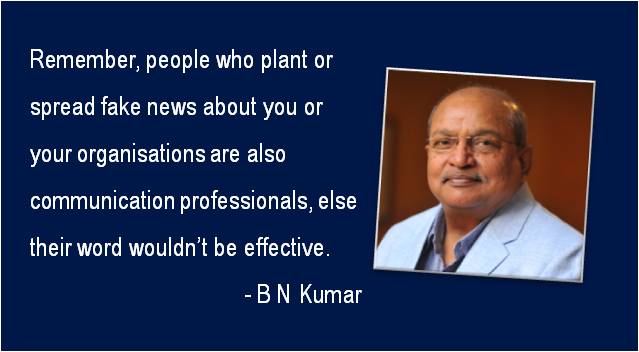 Last Monday, I was at #IABCIndiaConclave at NCR-Delhi where they had a panel discussion on fake news and ethics. The panelists discussed as to how fake news impacts us or our clients and how do we face such crisis. The conclusion was that crisis in any form is part of our lives and that we must be ready with risk mitigation strategy all the time. This is also the time for us to move to advocacy rather than pure PR.

A quick fact check and sticking to truth is also of paramount importance rather than trying to counter negative with a negative. In any crisis, employee engagement is a must since they are your de facto brand ambassadors and both internal and external audiences are bound to ask them on the veracity of fake news as the social media is used as an effective tool to fan it.

At the end of it all, I made my point: Do remember that those who plant or spread fake news about you or your organisations are also communication professionals or else their word won’t be effective!

I am told an MNC has some 1700 journalists on its rolls to do everything, including ghost writing for scientists! So, you need to think ahead of them! And the question of ethics does not arise because the fake news is planted side-stepping all ethics! One may have to use the age old Chanakya Neeti which says: Saam Daam Dand Bhed.

Another speaker rightly said: The true character of an organisation is put to test during crisis. It was a short-and-sweet, truly business-like conclave, packed with the keynote address, a panel discussion and a fireside chat and plenty of questions coming in.

Cut to Mumbai! The other day, a financial journalist friend of mine was furious that a PR firm insisted on a questionnaire when he sought an interview with one of their clients.

He fumed: A questionnaire? It is unethical to seek a questionnaire, he reasoned: it’s like giving questions to students a day prior to his exams. As a journalist, he may have been right. But as a PR professional one has to prepare his client for the interview with what we call Expected Questions.

I told my journo friend, bro, it’s like giving model question paper at tutorials and we PR people have to tutor our clients. That’s part of our jobs. “Okay,” he said: “Then do your job in your way. Don’t ask me to give you ready-made questions”.

This is where I am reminded of the advice given by couple of my insurance clients to their teams: Think like journalists!

Just politely ask the journalist as to what could be the focus of the interview and provide him or her with few talking points from the background of the company that you know of. There you are! You have the answers and isn’t it easy to frame questions from them and alert your client?

Just as in the issue of fake news, you and your client must be prepared for surpises. For journalists, interviews give ample time to catch up with a company’s top brass and “grill” them on various topics. Yes, after the initial pleasantries and discussing the weather and traffic, interviewers move on to difficult questions. And many reporters want to surprise the interviewee, with that ‘difficult’ question.

Remember, every journalist is trained to be ‘without fear or favour’, and also taught to put difficult questions to whosoever the interviewee might be.

According to my friend, he has another issue. Often, the PR or the corporate communications team ‘vets’ the questions and demands removal of certain uncomfortable ones. This, according to journalists, is akin to censorship, and thankfully Indian media is yet to be censored – of course after the dark days of the Emergency of 1975 – and unlike that in China or even certain western countries.

Further, as per the principles of ethical journalism, every interview has to be balanced. Questions should range from positive to negative, and ones that make the interviewee happy as well as angry. Else, the interviewer does not get his spicy stuff to “sell” his story. Just take Arnab Goswami interview with Rahul Gandhi as a case in point.

We PR professionals might also wonder: What if the journalist poses that most dreaded question?

Be prepared for it. Think of all comfortable and uncomfortable and even the most unexpected questions. Journalists are free to ask anything under, and beyond, the sun. They may even ask what you and your clients think as an irrelevant question.

As Big B says in KBC promos: Koi Bhi Sawaal Chota Nahin Hota! No question is small (or irrelevant, in our context). More on this later. After all, there is another day!