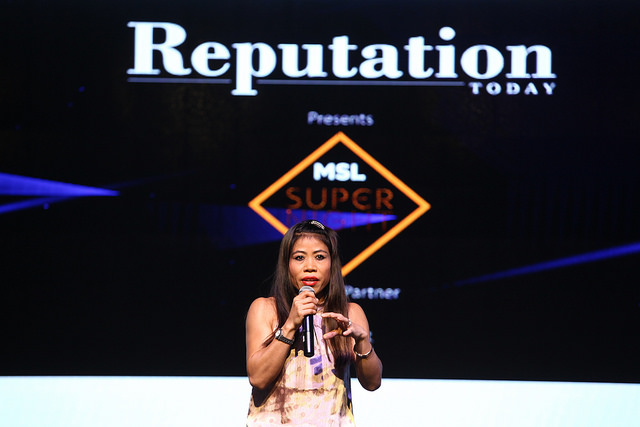 Always focused on planning her career moves, and winning medals for the country was Mary Kom, who gave a Power Talk at the Super Night at #PRAXIS7.

Talking about her journey, she said that the real story is in her book “Unbreakable” which was the basis for the movie, but there were limitations, as her Olympic achievement and other winning moves were not included. It is the story of a woman, and like a majority of Indian women, life is a struggle for her too. And, what sets her apart is the sheer determination and courage with which she took on challenges.

Her growing up years as a girl was a big challenge, right from the beginning. She had not heard about women boxing. Only men boxing were visible, and she had seen Mike Tyson and Muhammad Ali on the screen and was truly inspired. “But I was aggressive and fought with friends…in fact, I was an angry young girl!” she shared, recalling her childhood.

She actually got into the boxing ring in 2000 and after six months, became state champion; and in one year won national and international laurels. That was the beginning of her journey.

“My interest was full on”, she exclaimed for she kept punching and fighting for her rights both at home and at school. Convincing her family and relatives was her first challenge. Soon, she learnt the art very quickly and her coaches, who did not know where she came from, soon started noticing her. And, she started appearing in the news too.

The second challenge came after marriage, which was difficult. And after the birth of the children, came another challenge, which was even more difficult, which she just cannot explain, she confessed. It was after having her twins that she went back to training and won the Olympic bronze medal. She proudly said that she won five world championships consecutively. After her second child, she went on to win the gold at Asian Games, “which was not at all easy!”

“I have the will to keep going, and that is God’s gift,” she admitted in all humility.

In a conversation with her, Aashish Mehrotra, Chief Video Officer, MSL India asked her if she has googled herself as we all do sometime or the other, to which her humble comment was that Google is indeed, very important today.

Always in the public eye, how did she manage to get the resilience to push forward? “It’s very difficult, and today when I think of participating in any championship or event, I have to be very careful,” she shared. And for a person who always spoke her mind, she now realises that people can be negative. And, thinking about all the people who were inspired by her, she felt thankful from the bottom of her heart.

Sports personalities – men and women are covered differently in media. When asked what would she like to see, she came out with the fact that Indian women are not getting much support from society; even Indian religions do not extend any support. “I wish you would give more importance to young girls and women, who are fighting to survive in their own field or career! I really support them. We have to fight if we want to achieve something,” she was quick to pinpoint.

Having played many roles – boxer, trainer, entrepreneur, Parliamentarian, when asked which was the most enjoyable one, she admitted, “I love boxing the most, and it has given me everything”. Even in her Parliamentarian role, she does her duty, as it was something she never even dreamt of. “Sometimes I even enjoy it now,” she said, and went on to add – “But I will try my best for sports always”. Keep your dream on top out there, with a thousand more Mary Koms in the future, said Ashish.

Was it more difficult winning medals or raising children? Life in the ring was very tough, and “controlling my small boys is very difficult, as against boxing which becomes much easier then” she disclosed.

Like all of us, in her life, she did have role models to look up to. Her biggest role model was Muhammad Ali. Whatever her weaknesses and strengths, she always keep a watch – to improve. And about the attitude required, she said that after winning the Olympics medal she has become more humble and honest. Unlike some people, whose attitude undergoes a change after any achievement, she remains the same person – always working – cooking, washing, cleaning. “I am a mother still, taking care of my family and keeping all my commitments!” she recounted.

It’s amazing that after seventeen years, I can still win!” she exclaimed, with disbelief. Not really disbelief there, for we have tremendous belief in her. Her parting shot of advice for the juniors were – “Have the right attitude. Be humble, be cool. Plan your strategy. Remember,  that’s the way to go ahead!”

Be the first to comment on "I have the will to keep going, and that is God’s gift"

The Walrus & the Carpenter in the age of fake news

SPECTRA 2021: The Role of ESG in Building Reputation