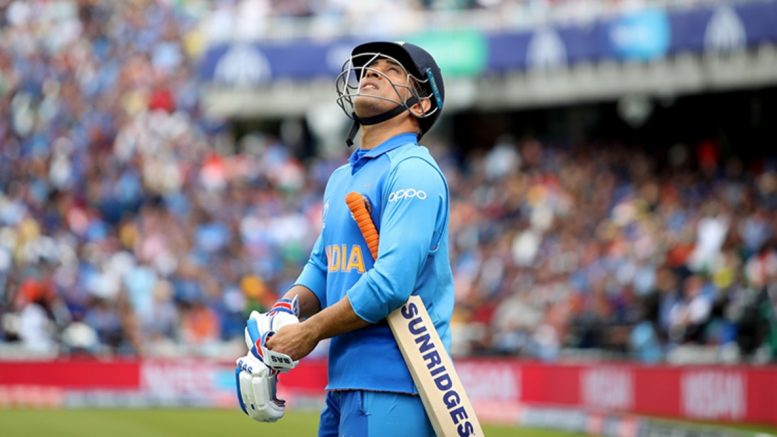 MS Dhoni, the most successful captains of the Indian Cricket Team, decided to hang his boots, on Independence Day this year. The No. 7 jersey that was all about hope till the last moment and making dreams a reality will not be seen again. He has left behind a legacy and big boots that will be hard for any wicketkeeper or a captain to fill in.

Dhoni always focused on delivering his best. As a Captain, he led India to win all key international tournaments, including World Cup T20 2007, ICC World ODI 2011, Champions Trophy 2013.  He is popularly known as the ‘best finisher of the game’. It was always said that the match is not over for India if Dhoni is still around.

A cricketer with a mass appeal…like never before

More than the performance, Dhoni connected with the 1.3 billion Indians like no cricketer ever did. He was able to connect with the aspirations of every Indian- irrespective of whether he/she was rich or poor, living in urban or rural India, upmarket or rustic. His simplicity resonated with all. His dare-to-dream syndrome fuelled aspirations of an entire generation. One can get a glimpse of Dhoni’s popularity if he/she goes to watch Dhoni play, and hear the deafening cheer as he steps out to bat.

Popular he was. But, he also had an unconventional leadership style that did wonders for him. Dhoni was a grand leader who could raise the aspirations and dreams of billions, win their ‘confidence’, give them ‘hope’ and instill a sense of ‘pride’ for the nation. He was the ‘small town hero’ who was the role model of millions of youth in small-town India wanting to make it big in life.

There is a lot that a corporate leader can take from Dhoni’s playbook, if he/she wants to be a successful leader. These are not the tips that one could find in a leadership manual. Thy may be unconventional but they work well. Here are some of the key leadership lessons from Dhoni’s journey.

A leader needs to craft a grand vision and help the team achieve this. Dhoni’s leadership is a classic example of this. He took over the reins of Captaincy when there was a lot to be achieved. He built the team with the unimaginable in mind. India had won the World Cup only once in 1983 and hence, when the young Indian team started its journey in the World Cup T20 2007, the expectations were not high. However, the team went on to win the World Cup at Wanderers, in what was a last over clincher. With this win, Dhoni raised hopes and aspirations of every Indian, who wanted to settle for nothing less than a top slot for the Men in Blue in all formats of the game.

Get your hands dirty

In cricket, it is the performance that matters the most. Consistency is the key, irrespective of how big a star a cricketer may be. Dhoni has one of the best strategic minds in the game. Having said that, he always focused on his performance and constantly tried to better himself, both in the batting as well as the wicket-keeping departments.

This is the mantra that needs to be followed by leaders as well. A leader, irrespective of whether he/she is a CXO or a team leader, should focus on upskilling and improving himself/herself all the time. Leadership cannot be about people management only. Leaders need to excel in some disciplines and not act as a non-playing captain.

Lead from the front

Dhoni has made us understand a very important rule of leadership-it is not about directing or unnecessarily pushing your team all the time. It is also not about putting all the blame on the team members. It is about leading from the front and delivering when it matters the most. One can never forget the numerous matches Dhoni has won for India. He has stepped in, in the most difficult situations, and finished the game in favour of India. A cricket fan can never forget the last ball six by MS Dhoni in the World ODI Cup Final in 2011 between India and Sri Lanka. The six ensured India won the match and the tournament.

The ‘best finisher of the game’, Dhoni has always led his team from the front and excelled in multiple roles he played. A leader should learn the art of ownership from Dhoni. As a leader, one needs to be in command. There will be difficult situations, but a leader should not be seen as someone who is scurrying around.

MS Dhoni has been a firm believer of sharing the credit of all the wins with his team. He has been pretty vocal about praising his team and attributing success to team effort. Even when India won the World Cup in 2011, Dhoni did not think twice before sharing his day of glory with the coach, Gary Kirsten and Sachin Tendulkar. The day was all about his great captaincy, super performance all through the tournament, his unbeaten 91 and last ball 6 in the finals. However, he was generous enough to share the win with the Coach and the team.

This is a great lesson for leaders. There are only a handful of leaders who believe in sharing the credit of success with their team members. Leaders should focus on giving credit where it is due. They need to focus on building a team of consistent performers and highly motivated team members.

Dhoni is popularly known as ‘Captain Cool’. The reason for this is that he always remained his calm and cool self, no matter how big the crisis is. He kept his smile on and never showed his emotions, even if the team was having a bad day at office. Even in close matches, he never showed any major aggression or excitement. He kept the opponents guessing on his next move.

This trait is a must for leaders. At work, you might encounter difficult situations. However, as a leader, you should keep your cool and not panic. Impulsive decision-making can only be detrimental. Hence, leaders should keep a cool head and try to find the best solution possible in case of crisis.

MS Dhoni says ‘Never let success get to your head and never let failure get to your heart’. A grounded person, MS Dhoni would never have an air of arrogance around him because he has been the most successful captain for the country. He has always been simple in his expectations and grounded in his conduct. There are numerous young players who have shared how he is approachable and willing to help. Even for his fans, he is humble and approachable.

Dhoni has also seen his share of tough times when he did not deliver or when he was stuck in the IPL fiasco. However, he has always bounced back and made it big. The key reason is that he took every failure as a learning and did not get bogged down emotionally.

Leaders should follow this mantra and stay grounded in the good as well as the bad times. They should not let arrogance or disappointment rule them. Instead, they should focus on their next challenge, or work on a strategy to bounce back.

Dhoni has always been a leader who focused on the putting his best foot forward. He built team for the future. He promoted merit and not favoritism. He was never about favoring his friends and well-wishers to ensure he has a cartel of supporters around him. He wanted to give an opportunity to the best talent.

Leaders in the corporate world should learn from Dhoni and promote best talent. Loyalists should not be favored over talent as they cannot deliver results.

As Dhoni moves on to his next innings, he will be missed in the field. However, his simple, ground to earth leadership style has a lot to learn from. Whether it is about being generous and humble, or about focusing on leading from the front, he gave a whole new definition to leadership. His dare-to-dream attitude is what gave millions of his fans the power to believe in their dreams.

I am sure he will continue to inspire us in the times to come.

Be the first to comment on "Leadership mantras from MS Dhoni"