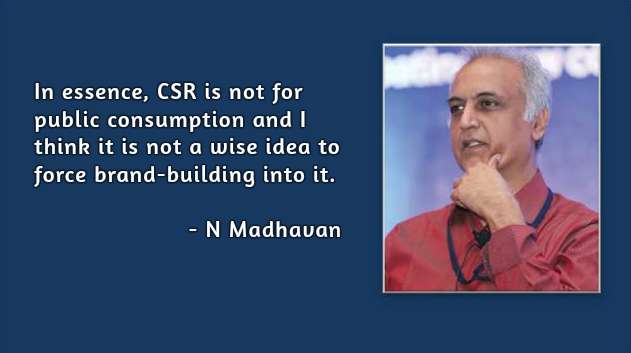 N Madhavan, Senior Associate Editor, Hindustan Times is someone who is active on social media today. He features among the Top 100 in India in Twitter following. Writing mainly on business and economics, his focus also traces a weekly technology column – Tech IT Easy and a weekly blog in verse – Madversity. We track here, his strong views on the role of media in promoting CSR, which he feels has not been a favourite topic. Shree Lahiri talks to him as he waxes eloquent on what is the attitude of media, building a case for a CSR wire, ‘green washing’ and more…

RT: How did media deal with the issue of CSR, before it was made mandatory?

Ans: CSR has never been a favourite issue with the media, as it is seen as plugging the company without much news value. Only inspired ideas that went beyond simple social work usually attract attention. I do not know if some of them actually come under CSR. I can think of examples like Mahindra Theatre Awards and Tata Crucible Quiz for students and Reliance doing work during Gujarat’s earthquake as newsworthy examples.

RT: What is the role of media in championing CSR, if at all?

Ans: Not much in an official sense. As it is the space for public interest, media has shrunk and media entities focus more on what makes sense for their audiences. The media has to be talked into considering inspired initiatives that make their audiences sit up. In essence, CSR is not for public consumption and I think it is not a wise idea to force brand-building into it.

RT: The media has a huge role to play in how CSR is broadcast to the world at large. It is simply not enough for organisations to do their bit for social causes. Do you agree?

Ans: I don’t necessarily agree. Media’s role is often a mythical fantasy. Media entities tend to play watchdogs than carriers of good messages, when not addressing the specific interests of their audiences. Meaningful partnerships are possible with an eye on the media. What matters in these are the power of the ideas and the way they are implemented.

RT: In April, 2014, it became mandatory for Indian companies with a net-worth of over 500 crores to contribute 2% of their earnings towards CSR activities. Now two years down the line, do you think this is working?

Ans: I see very little evidence indicating that this is working. But, I must say this is because the media per-se does not cover these issues
anecdotally. Perhaps there is a case for a CSR wire that highlights such issues.

RT: At PRAXIS 2014, you had observed that many companies in India, who are eligible under the Companies Act 2013, do not often have strong corporate governance programs – let alone workable CSR programs. Has this view undergone any changes?

Ans: Good question! Most companies are crawling up but not moving up on the scene. A case in point is the appointment of women directors on boards, under SEBI rules. Many companies simply put family members on board and many still haven’t done anything. Corporate governance in India is practised systematically only by a handful of companies.

RT: ‘Green washing’ refers to the practice of the corporate spin employed by a company in declaring itself to promoting environmentally friendly policies whereas in reality, the company does not live up to the rhetoric. Please comment.

Ans: I have been cynical about this issue ever since I came across a prominent hotel group that issued press releases on laser-driven washrooms to conserve water AFTER facing a case on water wastage. The more the ‘green washing’, the less the impact.

RT: You are active on the social media and have been included among the Top 100 in India, as far as Twitter following is concerned. You have also been writing about social media like your article on “Why Twitter’s gambles to turn cool are worth the risk” two months ago. How do you feel companies can try leveraging CSR in the social media world, so that they can strengthen consumer trust and loyalty, encourage followers (and their friends) to take action and participate?

Ans: Companies need to partner with NGOs and join the conversation on running issues. For example, the current drought in Marathwada is horrible, and I have not seen a single corporate rising to the occasion. I was proactive in spotting Give India and running tweets to people asking them to contribute. Pro-active corporates would have jumped on it early.

RT: The media can act as a conscience keeper by constantly reminding organisations about the need to give back to society and to look beyond profits. Is this happening today?

Ans: Not at all. More than media, I think there is a need for civil society initiatives that involve the media. Media in itself likes to stay neutral but can be roped in as platforms. Often, issues matter more than labels. Think issues and media involvement will happen.

RT: Media can also take a critical view of the CSR programs that an organisation claims to run and ensure that it is not indulging in ‘green washing’. Is this happening today?

Be the first to comment on "Media Speak – N Madhavan"