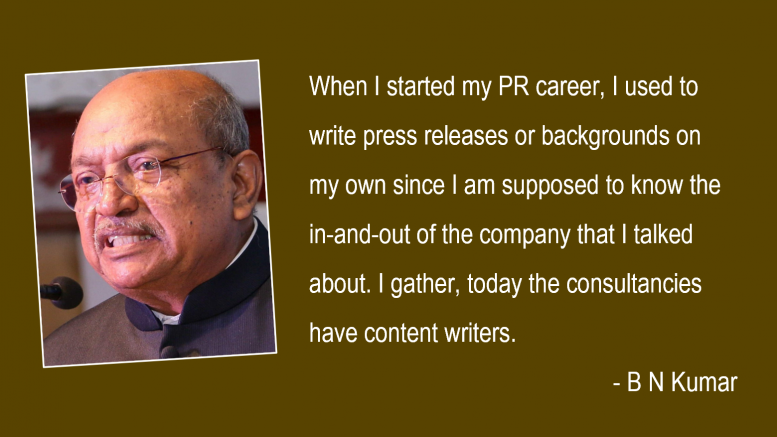 My generation of media professionals grew up singing the 5Ws and One-H song. Not just singing, but practising the formula in our writings. Now that I have been running four news-based websites and a YouTube Channel, I am forced to conduct free online classes on the art of writing a simple Press Release. It appears that this is going to be my task till the Ganga flows down the Himalayas! Metaphors apart, it pains to see even the biggest PR firms and the tiny startups forgetting the basics of writing a Press Release. I chose to express my sad feelings on this forum hoping that the senior professionals will read this and get back to their mail boxes to check the quality of media releases that goes out from their companies to media outlets.

It may sound like repetition, but one should remember that a journalist writes for his product – the newspaper, magazine or a TV channel – keeping his consumer – the reader or the viewer – in mind. A PR person’s job (for which one is paid) is to ensure the end consumer understands what is composed.  Basic? Right. But we seem to forget it. It’s akin to a motorist who showers the choicest abuses at jaywalkers, but walks recklessly on the road the moment he gets out of his vehicle.

Ogilvy big boss Piyush Pandey keeps saying that one can be creative even in writing a Press Release. One does not have to spend sleepless nights or consume litres of coffee to come up with an ad-copy type headline for a Press Release. Just say the most important point of the release in a maximum 10 words. This attracts your press release reader – the journalist – to read further. But no, most of our releases have longish sentences as headlines. Result? The media friend presses the ‘delete’ button.

What I write may sound illogical to many, but it is the illogical way of writing that the PR person must avoid.

I have an idea for all PR award platforms – have rewards for the best written press release and the jury must be journalists.

Like I said in my previous columns, writing Press Release is not rocket science. It is as basic as buttoning your shirt. You look into the mirror to check if you dressed well or not. A good newspaper is not only the mirror of the society, it shows you how a news copy is written. Just check how your release appears in the media and practice writing in a similar fashion. Sounds simple? Well, that’s what I have been saying.

When I started my PR career, I used to write press releases or backgrounds on my own since I am supposed to know the in-and-out of the company that I talked about. I gather, today the consultancies have content writers. I get this feedback from my friends in PR firms whenever I point out the missing points in Press Releases. They tell me ‘will inform the team’. I am not sure if the team is informed or not as I see the continuation of the same trend. Another aspect one flounders on swith spelling of their clients’ names.

Occasionally, one finds fairly well written releases obviously written by the company writers or someone else. Because one knows by experience that the particular PR firm is not capable of writing a perfect press release.

Finally, dear PR consultants do remember that the job of posting a press release does not end by seeing it on paid sites or those who do not bother about quality content. The concept of writing a perfect press release has many factors. My humble request to PR bosses – please stop harassing the media with irresponsible or casual content. Else, the content will continue to land in trash bins, irrespective if your servicing teams’ innumerable reminders.

Many PR firms have been hiring ex-media persons. Can they not be used for content creation, rather than only getting them to devote time for media strategy?

Be the first to comment on "Pursuing better media releases"

An organisation that leads by example!