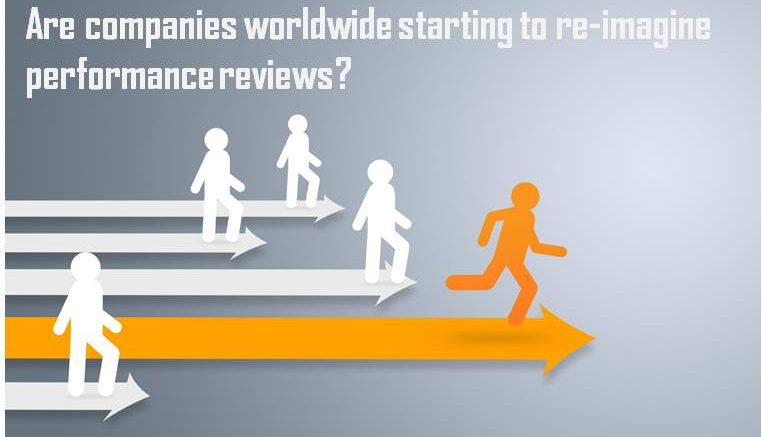 Everytime when the New Year kicks off, we tend to review the year gone by and then plan the new year’s journey on a higher note. Yes, and then appraisals dawn ahead, which can frankly prove to be quite worrisome for some. Quite reminiscent of the exam blues we have all faced during our student life.

But, there is good news! It is an unwritten rule that performance at the workplace, must be kept at an optimum level at all times. It does not make sense to wait for a later point in time to assess performance for performance is dynamic; and feedback is more effective when provided on time. This is the reason for rethinking annual performance reviews. Companies worldwide are starting to “re-imagine” and some are scrapping their annual reviews!

Off late, the annual performance review has been falling out of favour. Microsoft and Gap are among several companies that have reformed their evaluation processes in recent years. The consulting firm Accenture, an embodiment of traditional corporate culture, announced that it is getting rid of annual evaluations for its employees, and replacing the process with a system where managers will give feedback regularly and on time.

And, considering the Millennials whose presence in the workplace is loud and clear, according to a study by Intelligence Group, 72 percent of Millennials want to be their own bosses at work! If they do have a boss, 79 percent of them state that they want their bosses to serve as a coach or a mentor.

Employees would be rated on time – on how well they have met their objectives at the end of a project. Deloitte management was convinced that they needed conversations that were realised right after a certain project, instead of at the end of the fiscal year. Most time was apparently spent discussing ratings instead of actually talking to employees about their performance. So, on time, is the operative word, here.

A common feature of typical performance reviews is the implied “subjectivity” of ratings. For example, if you are rating someone on their ability to engage with their co-workers, you are rating that person based on how important you think engagement is.

Language is of vital importance here, when handling the sensitive topic of performance reviews. Words such as ‘rating’ comes with a negative connotation and does not fully represent the new system applied at Deloitte. That’s why the new performance review process was named ‘performance snapshot’ – giving the message that performance is evaluated at a single moment in time rather than in a given quarter or per year.

General Electric, HR thought leader,  also joined the growing line of companies looking to make the traditional performance review a thing of the past. GE is trading its annual performance reviews for more frequent conversations and feedback. This includes an ‘app’ to help managers and teammates share feedback and phase out performance rankings.
Statistics from the Institute of Corporate Productivity show that about 10% of Fortune 500 companies have already canned an annual ratings system.

Experts feel if a company like GE were to make the transition, that would really be powerful. In fact, it could dramatically escalate the number of companies looking to end annual ratings.
Technology is being given as one reason for the trend, as younger workers demand more instantaneous feedback on their ongoing performance.
This pace of change actually means annual goals may no longer be relevant by the next quarter. So, let’s look forward to embracing more changes in 2017….of course, to rewarding change!

Remember to respect, and break stereotypes