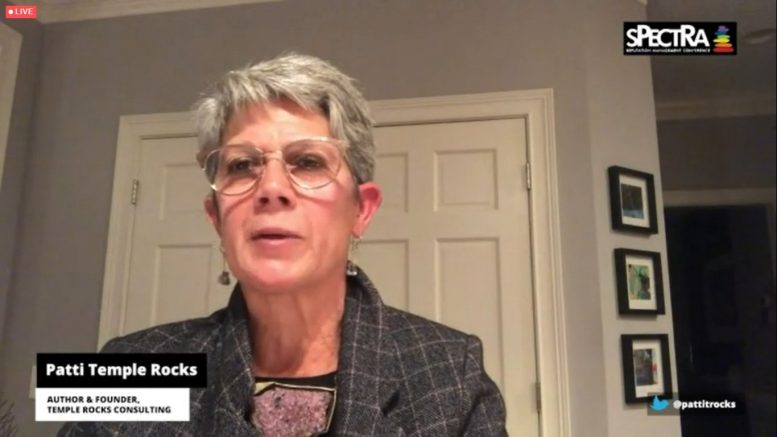 If a tree falls in the forest and no one is there to see it, tweet about it, witness it, did it really happen? Will anyone care? These were the few questions asked by Patti Temple Rocks, Author and Founder of The Temple Rocks Consulting in the beginning of her session at SPECTRA Day 3. She laid emphasis on the importance of backing up the words with actions and how it has become more important today than ever before, as for the first time we are facing a world crisis. These difficult times have led many people to learn a lot of things as they tried to not only survive but thrive through these difficult times. The few learnings she shared with the delegates are as follows:

Patti Temple Rocks explained how this pandemic is different from all the other major crises which corporations face, as this time they simply cannot just help the victims through donation and charity and expect a bloom in their reputation. This crisis, the pandemic, calls for leaders to pay attention to their own employees, prioritise them and make sure that they have everything they need to be safe and healthy before going outside for help. The way a company deals, engages and motivates its employees plays a huge role in its reputation and the pandemic has only made it more clear, said Patti. Consumers also value such brands in the market.

Patti opened up this topic by stating that even before the pandemic, people were losing trust in the government, scientists and media as our society was going through crucial changes. The pandemic was the last nudge, our house of cards of trust, needed to fall apart. Patti Temple Rocks explained how the loss in trust in media has gravely affected the reputation business, as it is heavily dependent on credibility of the media. Giving the example of the news related to racial injustice, she explained how less than 25% of the audience consider traditional media as the source of truth. One of the most revealing statements made by her was that trust and influence are not the same thing, even though social media has influence, it still does not have the trust of the people.Patti put stress on the fact that this is the time for the communication professionals to lead and change the world. This is an opportunity for the companies to fill the void left by these institutions, with trust, through impactful communication. She truly believes that this is the time for the communication professionals to step up and become the voice that brings change, through our brands.

A New Era for Reputation

Patti Temple Rocks explained how this is a new era for reputation management as we have rewritten the laws that govern a company’s reputation during COVID 19. In 2019, the Business Roundtable released a new “Statement on the Purpose of a Corporation”. This basically led the corporations to not just work for profit but for all the stakeholders of the company, internal and external. She gave an example of Johnson & Johnson to explain that a company coming to society’s rescue without necessarily enriching itself or its shareholders, is a solid investment. She made a very bold statement by saying that there is no playbook for these times and won’t be in the near future because things are changing so rapidly. She advised everyone to constantly pivot their strategies according to the situations they face. She paid special attention to the importance of empathy to gain trust and continue engagement in a digital world. This helps us to create a participation based relationship with our audience, which comes in handy during crises when we need their trust and support.

The Power Of People

Patti’s last lesson came in the form of the importance of the voice of a consumer. Today everyone has opinions and the medium to voice out their opinions. It ranges from social issues to their favourite flavour of chips, and thus it is extremely important for the corporates to show people that they are heard and their opinion matters. Patti explained how ‘laying low’ and ‘staying calm till everything settles down’ simply was not an option in 2020. Today, silence is seen as a form of endorsement by the public. Silence is Violence was the phrase used to shame the companies who did not take a stand on these issues. Patti also warned the viewers that this increased expectation is not a phase and will continue in the future as the younger audience believes in them. It is not just about saying anymore, today’s audience demands action and an authentic one.

Today consumers want empathy, authenticity and transparency. She advised today’s leaders to constantly engage with the younger audience and keep note of what their demands are. Today a company’s competence only covers 25% of its worth and the other 75% comes from how it lives its values, that will also determine its reputation. As communications professionals, Patti Temple Rocks believes, it is important to focus on how a company lives its values. 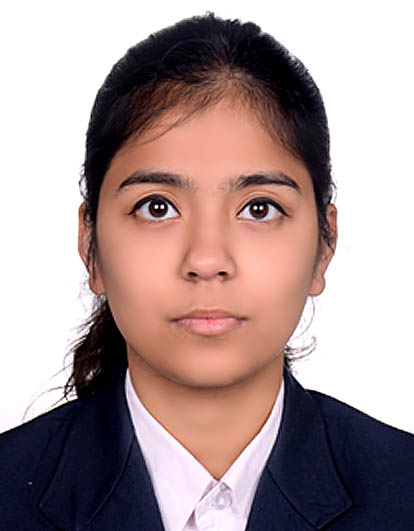 Khushi Rawat is a part of the class of 2021 at the School of Communication and Reputation, Mumbai, India. She did her Bachelors in Arts with a Triple Major in Media and Communication, English and Psychology from Christ (deemed to be) University, Bengaluru, India.
Khushi was born in Udaipur and brought up in Kota, Rajasthan. She loves story telling and talking to people. She believes in learning something new everyday. She sees herself as a learning feminist. She hopes to influence people to do good and contribute to a larger cause.

The power of one tiny cut

On Purpose Consulting – Communicating to drive social change in India

Upcoming Trends in Public Relations in 2018