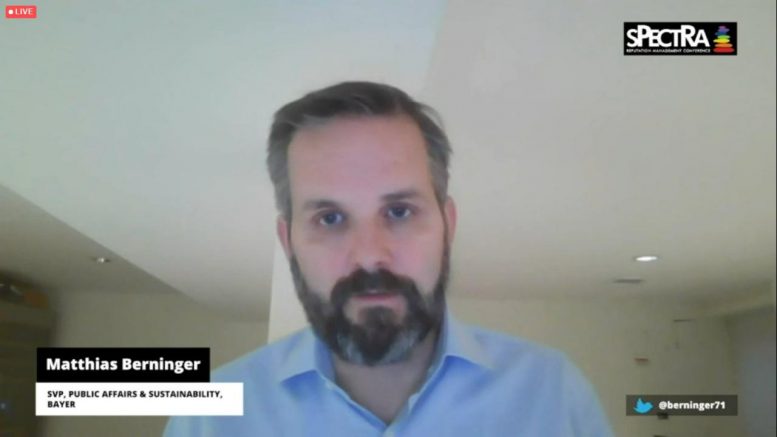 Reputation Today organised our country’s largest virtual conference SPECTRA focusing on reputation management. The communications leaders from all over the world joined the event. One of them were Matthias Berninger the Senior Vice President, Public Affairs and sustainability, Bayer. The German multinational company focusing on pharmaceuticals, crop science and consumer health with a vision health for all, and hunger for none.

The session was really intriguing as it was filled with his own experiences and thoughts on biodiversity and sustainability. He began the session by quoting the renowned Indian novelist Anita Desai “Where ever you go, it becomes part of you”.

He then moved to the five things that shaped him as a great human and a professional. And they were: –

The common factors that made him connected to these are the impact it has made in Bio- Diversity, sustainability and in climate change. He added that the impact of environmental issues was less earlier as the people underestimated the speed and the effect it will have in the society. But now that is not the case; now a days everyone is aware about the environmental issues and are willing to take actions against it. He said that we can have a driving force to advance the global goals on sustainable development. And that was one of his reasons to join Bayer. He also pointed out that “Value base business will help in building reputation and the foundation of the business.

According to Berninger, the three driving forces that are relevant for this world to address are economic and Political power shift, age of the Anthropocene and Bio-Revolution. He said that we need to be overstepped from planetary boundaries and make people free from poverty as the world population is increasing. Communications professionals should look at these underlying forces seriously and should do more in this space.

He also pointed out that Genetics and Artificial Intelligence are the future and it will reshape the business activities and the relationship of human in nature. The Nobel prize for chemistry received by Emmanuelle Charpentier and Jennifer Doudna in gene editing is the beginning of it. Everyone knows that China is the strongest key player in the world and according to Berninger the reason behind it is the economic and political power shift in the bipolar world. And this is what made China the strongest player followed by United Nations and Russia. G20 is the greatest platform for all the business leaders to come together and decide an agenda to deal with this global crisis.

Considering our countries present scenario, he said that it is our responsibility to help farmers and build sustainability. Next is the age of bio-revolution and there will be great economic impact by 2030-2040 in the fields of human health and performance, agriculture and food, consumer products, and in energy production. He keeps on mentioning about the relevance of protecting our environment as there are multiple factors affecting the sustainability. Some of them are ocean acidification, stratospheric ozone depletion, and chemical pollution.

Berninger then said that we have to take the right decisions at the right time. So, we have to first demonise and then start to regulate the things. According to him PR is a combination of presence and relevance. He said that “character is like a tree and reputation is like a shadow. The shadow is what we think of it; the tree is the real thing”. So, to unblock the controversies we have to first acknowledge our weakness, bust the myths, surprise through actions and most importantly the team members should enhance and lead by mutual trust and understanding.

Biodiversity governence is one of the biggest crises we are facing. To solve the biodiversity pricing, we need to stop deforestation, protect crops, decarbonisation, and should have the ability to produce more on less land.

We have to believe in capitalism, science and innovation, sound regulation and participation. If we want decarbonisation, we need to reduce the carbon emission, and should focus more on investment and technology-based innovation.

One of the major fields that benefited from the covid-19 pandemic are the pharmaceutical industry. Everyone stood for each other and that was something new. There should be family planning for women, Bayer is doing a lot for supporting women and making them be in the centre.

Bayer have decided to stay calm and neutral by 2030. we have reduced 40% of our carbon emission from the direct supply chain, 12% from the supplier side and we will also use innovations that will help the farmers. Along with that 20% of the salaries will be spend on measurable targets on sustainability. Compensation should be linked with progress and CSR should aim at creating impact.

We as an industry of crop protection have underplayed the relevance of biodiversity and overplayed the importance of year per hectra. And we should marry the goal of intoxication with the goal of sustainability.

We as an individual need to have a clear-cut idea about the happenings around us and should learn from it. Especially from politics and business as it will have a huge impact in everything that is connected with our life. Environmental issues are getting worse and people are suffering. So, it is high time for us to stand for our mother nature and protect the sustainability. There will be many innovations, everything should go hand-in-hand to build a better world.

Shwetha. A. Kumar from Cochin, Kerala. A finance graduate & a Post Graduate in Corporate Communications & Advertising from Amrita Vishwa Vidyapeetham, is currently a stude at the School of Communication and Reputation (SCoRe).
She also done a short internship as part of her post graduate programme with Ice Cube Event Management Pvt. Ltd, reported 2018 Kerala flood (article), extension of Kochi Metro (tabloid) & has interviewed and made a feature article about SOS an NGO for magazine.
SHARE TWEET PIN SHARE

The countdown begins … What I learnt from PRAXIS