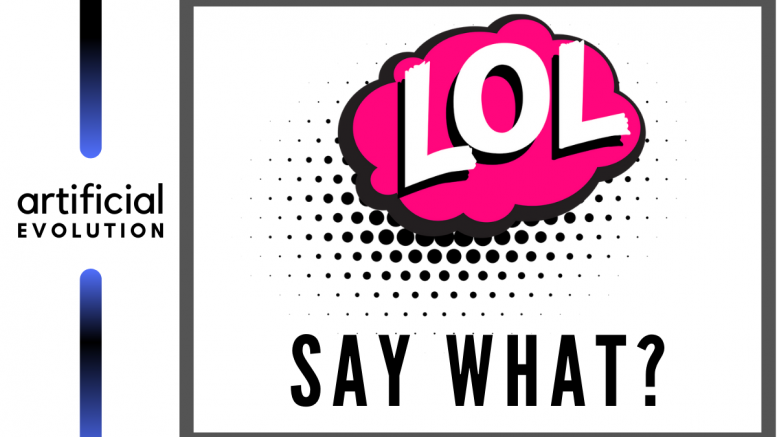 I compare internet slang to the fabric of space time. Like the formation of a blackhole is caused by the death of a star and how it changes the nature of that “physical area” of space time – words, mnemonics and graphic based messages often change the way we speak instead of just adding to our lexicon of words.

Back in the day, SMS allowed us 140 characters to get a message from one device to another device. It was a technological barrier that compressed some words and angered English professors everywhere. Soon, multi-text support was announced but SMS transmission was expensive. This further cemented the idea of making a 140 character message more rounded and to the point.

Since SMS was the only texting service we used on a phone for a long time, the style of texting stuck. Blackberry’s push email perhaps normalised things to an extent but it was soon defined as

emails = serious and grammatically correct and;

The evolution of text messaging platforms didn’t have that much of an effect on the language itself. Tweets, however, further exacerbated the use of slang because “Oh, Now I have to tag people in my message. Must make message shorter”. Marketers and users have spent hours staring at their tweet drafts thinking, “Hmm, should I use the ‘&’ instead of ‘and’. Might save 2 characters.”

IL was an evolution of English that allowed users to be concise. However, the universe must seek balance. Spellings were butchered, words were shortened, the acronym vocabulary exploded and word blends started to form. Small price to pay for ease and efficiency.

When I first heard of LOL, I phoneticized it like most people.

It happened to all of us. One day we realised IL is real and we felt illiterate. Over time we got used to it. At the time however, it had an interesting code-like nature. Users were proud of using slang to communicate messages that were difficult to decipher as little as 100 years ago. It became a club. Parents asked quizzically about what the Eggplant emoji signified or SJW and BLM meant.

Using LOL, ROFLMAO and 😀 are all methods of expressing laughter or that you accept something was funny. Similarly, BRB, TTYL and L8r are phrases we use to create pause in an existing conversation. The permanence and/or length of this pause is denoted by different words. BRB is a comma whereas TTYL and L8r could denote anything from a short span like 3 hours to a full stop. One of the most unique things about Internet slang is it’s malleability. A user can define their tone with extensions or reductions of the phrase itself

Lol = Hmm. I smiled a little and exhaled a bit more forcefully.

Another way malleability shines through in IL is the usage of capitals. An unspoken rule of texting is that when the communicator on the other side replies with capitalised letters for a word that may not require it, it automatically means they’re EXCITED!

(Even when you reached the word ‘EXCITED’, there was a slight change in the way it sounded in your head – weird.)

TL;DR is probably one of my favourite modern phrases. It essentially encapsulates the mood and attention span of the average Internet consumer with exactly 4 words – Too Long; Didn’t read. A phrase that bloggers, story tellers and long format writers are not just aware about, but actively engage in trying to ‘beat.’ This leads to clickbait headlines, bold and dramatic text quotes, pauses with the famous “…” and  my personal favourite:

WRITING SOMETHING IN A HUGE, CENTRALLY ALIGNED FONT WHEN TRYING TO MAKE A POINT OR QUOTE SOMEONE.

Writers have to understand why 1000 word articles are being ditched for 1 minute long Nas Daily videos. Although it’s not proven, but theories suggest that the use of IL and our drop in attention spans are directly correlated.

Shortspeak is defined as the use of pictures, graphics and familiar patterns and diagrams to convey a message. Basically the anti-text.

Emojis, memes, stickers (custom or otherwise) and some filters, form the hieroglyphics equivalent of the internet age. They have intrinsic value for information pertaining to reactions and/or trends.

To be fair, they are more ‘ingredient’ than ‘entrée’ – rarely used by themselves to carry a conversation. In 2015, Chevrolet tried the world’s first ‘Emoji Only’ press release. They wanted to “be irreverent” and “have fun” with the young American car buyer.

Blended words existed before the Internet. The word ‘Internet’ itself is a blend of ‘International Network”. This phenomenon however exploded when the democracy of internet hit.

Sext, Hangry, Phablet are examples of smooshing words together to form another. Increases specificity about the object of the sentence – An Ad-adverb or an Ad-Noun. Some of these words cannot be attributed directly to the internet but their existence is almost always online. Words like Chillax and mansplaining are going to be seen more on a screen than in a newly printed textbook or newspapers.

Intentional misspelling is probably the most obvious way of explaining IL. Words like Seriously were shortened to SRSLY, numbers like 2 and 8 became the pseudo spelling of ‘to’ and ‘ate’ (l8r, m8, 2night) and perhaps the most confounding was words like cool and ok became Kewl and okies.

Acronyms, also an instantly recognisable feature of IL, became mainstream earlier on. From military terms like ETA and AWOL to office/corporate short forms like ASAP and TBD, the common sense terms led the pack. This led to the acceptance of acronyms and rise of ‘phrases as acronyms’ i.e. TTYL, WBU and ironically – AFZ (acronym free zone).

Homonyms, or words that spell the same and sound the same but carry different meaning, also had a resurgence for IL. Feed, tweet, tag, status, viral and troll mean very different things with the backdrop of subjects like the internet or social media.

As with any language, there are crests and troughs. There will be inclusion of new words every year. Selfie, i.e. the act of taking a picture with oneself mutated into other -fie related mods  (dogfie, catfie etc) that described the act and the object. We don’t hear those mods anymore but they were used heavily in 2013 when ‘Selfie’ was announced as the Word of the Year by the Oxford English Dictionary and BBC.

IL will keep evolving. We’re going to be surprised every year.

Strategic Communications is at the heart of driving change