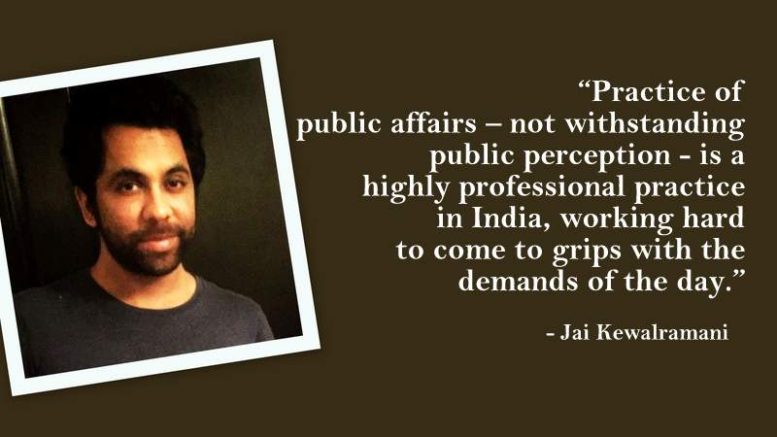 Since modern corporations are subject to the dictates of regulators, Public Affairs (PA) has become very critical to their future. The public affairs scope helps companies reach a deeper understanding of the policy direction of the current government, and enables them to strategize their country growth plans, influence public policy, build a strong reputation and find common ground with stakeholders. Unfortunately, in India, laws and regulations given a mandate by the government normally lack clarity and their successful application is not viable. In such a situation, the role of Public Affairs becomes even more complex. This has evolved and now encompasses everything from handling entry issues, to the on-going management of stakeholders, policy push and crisis management.

It has often been alleged that kosher public affairs is an oxymoron. To the layperson it is a thinly-veiled synonym of “lobbying”, which is a dirty word in India, as perhaps elsewhere too. It conjures up images of below-the-radar unethical behaviour; of an unholy nexus of politics, bureaucracy, media and corporates. Some headlines-making episodes in recent years have tended to underscore this perception. In India many believe that lobbying means knowing some influential person who has access to a minister or bureaucrat and can get “it” done. Since lobbying activities were repeatedly identified in the context of corruption cases, they became synonymous with corruption and political scandals in the public consciousness.

If public affairs professionals can be defined as those who have the eye and ear of policymakers, India’s long history is replete with notable examples. But lobbying as a practice probably began during the British Raj when high-profile Indians went to London to lobby on behalf of the Indian interests. In 1831, Raja Ram Mohan Roy travelled to England as an ambassador to ensure that the British rulers did not overturn a regulation banning the social practice of sati or burning widows prevalent in those days. Dwarkanath Tagore, the grandfather of the poet Rabindranath Tagore similarly lobbied with the British rulers to allow Indians to participate in business activities along with British merchants. Their efforts fall under the textbook definition of a lobbyist, as one who attempts to influence legislations and government decisions in favour of special interest groups. Dadabhai Naoroji is another name from the early days of lobbying. In fact, India’s first business association, the Calcutta Chamber of Commerce now the Bengal Chamber of Commerce, was set up way back in 1855. Three years later, similar chambers were set up in Mumbai and Chennai. It’s when lobbying in India began to acquire an institutional framework. Today, public affairs entail lobbying with trade bodies such as FICCI and CII, building a relationship with the public and also implementing strategies and campaigns.

This is why companies must take the role of PA very seriously. There is a dire need for them to have a dedicated staff catering to handling tasks such as identifying issues, developing positions, and gathering compelling international benchmarks, leading government-affairs’ units and interpreting a much broader range of possible regulatory outcomes. These people quantify the impact of these outcomes on all concerned stakeholders, not just within the company, but also within the industry at large. This approach is extremely useful in breaking through a deadlock situation making it easier for the regulatory-affairs’ groups to provide consistent, coherent, and proactive communication supporting a company’s regulatory strategy.

In India, corruption is one malady that impacts companies regardless of which part of the bureaucracy they are approaching. With several Indian business houses and multinational corporations (MNCs) setting up projects in various states, the need for interaction with state governments as well as the Centre has grown manifold. And, to achieve its business objectives, a company must have the bandwidth to interpret the political environment, understand political processes, build relationships with political decision-makers and convey messages to politicians effectively. The inability to do so in the correct manner has many a times had a damaging effect on the reputation of even large organisations, by means of failing to deliver on promised time-lines or sometimes even complete execution on advertised projects etc.

In this way, Public Affairs is playing an increasingly critical role in an organization’s communicative structure. It is a hard ball game for this wing to liaison between the government and other stake-holders like vendors or suppliers to ensure ethical business practices are in place. This requires those handling this task to interpret legislation and laws swiftly, and efficiently relate them to the client’s business objectives.

A distinction however needs to be made here between the traditional practice of “suitcase” brand of lobbying and today’s research/content-based lobbying activity. Lobbying is increasingly a professionally managed, and therefore an ethical and more transparent activity. And while the trade associations have played an important role in the development of public affairs, increasingly it is the private public affairs consultancies and individual professionals who are beginning to matter. Today it is a multi-billion rupee business.

The question is often asked whether individual consultants are more effective than professional public affairs companies. In my opinion, there are certain inherent advantages in hiring a professional company. These have more resources and capacity to engage in research-based persuasion than the individual. Also, they offer wider services like stakeholder identification, research, briefings, and media relations, including the increasingly important social media platforms for driving the agenda. Hiring a professional public affairs company allows the client to further their objectives while staying at an arm’s length from those whose influence is being sought.

A leading PR journal recently speculated: is it time for a bull run on public affairs in India? It concluded in the affirmative.

As the country’s economy makes swift strides towards being counted as one of the world’s most powerful, the role of Public Affairs in enabling this must not be undermined. Despite the challenges, in the future we are certain to witness the rising importance of this function in the economy.

So clearly, the practice of public affairs – not withstanding public perception – is a highly professional practice in India, working hard to come to grips with the demands of today. 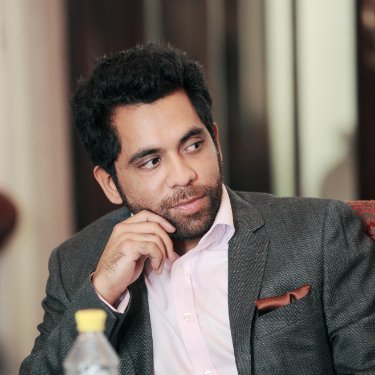 Director at Perfect Relations
In the eight years that he has been with The Perfect Relations’ Group, India’s leading PR consultancy, Jai has worked on accounts across sectors and mandates. His major responsibilities at the group include client servicing, media relations, social media, public policy and business development. Jai began his career working in London at CollegeHill Associates, a financial PR firm.
Jai dreams of driving change in India by developing the role of political lobbying in the country, no different from the United Kingdom or Capitol Hill.
SHARE TWEET PIN SHARE

High time for PRCAI and Editors Guild of India to meet!