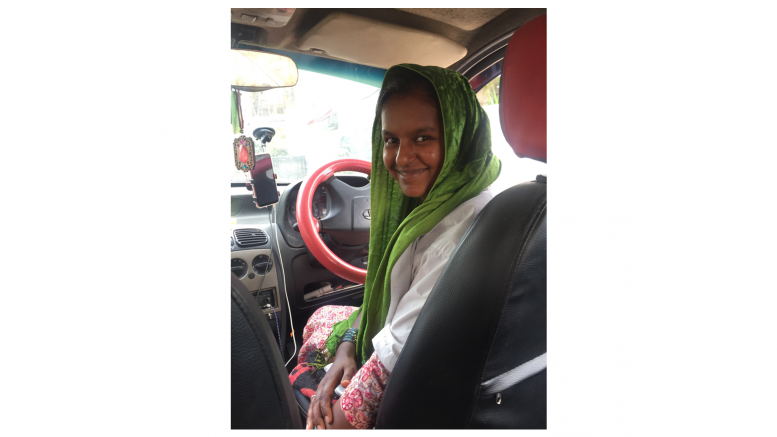 Keeping all arguments, pros and cons aside, I believe in the merits of the ‘sharing economy’. It paves way for sustainable living and helps not only people but the planet as well. Which is why when the four-letter, app-based ride sharing cabs was introduced, I immediately took to it. It makes me feel independent especially when traveling out of town, and free when visiting local places. I have been using it daily for about two years now. But of all the benefits, it was heartwarming to see how the ‘sharing economy’ has liberated people on the supply side as well.

When Jabeena accepted my cab request on the app, I looked twice, even thrice to see if it is indeed a woman who was going to drive me. I have been driven by women before, in various cities – cabs for women mostly, driven by women. This was my first in an app-based car sharing. As liberated as we want to be, in India and even all over the world, we have sections of the society still conservative and have biases of women doing jobs known to be ‘for men only’. It is inspiring to meet everyday people silently become trailblazers for their family and communities, facing myriad challenges, yet moving ahead and shilling the light on the path ahead; while chipping at the proverbial ‘glass ceiling’ one profession at a time.

Jabeena is a bit over 30, wearing a driver’s white jacket over her green kurta pajama. I saw her eyes first through the rear view mirror and like a cliché, full of determination in them. She is a mother of two, one child with disability that keep him immobile. Other, just two years old. She was a Muslim and wore a hijab. She was not very talkative, but articulated her story well.

A rebel at heart

Jabeena had a car at home and to use it, she decided to learn how to drive. She realised that she could monetise it by being a professional and earn her own living to support her family. The first challenge came when a firm ‘no’ came from her parents, while her husband was all for it. So I had to ask her a couple of questions as her story kept me captivated. This is how the conversation went.

Me: My guess is you convinced your family to let you become a professional driver in the end. How did you do it?

Jabeena: I refused to eat. Then they had to call for a family meeting to discuss. I told them about other women, earning for the family and being financially independent. We agreed on a few things like not driving at night, driving mostly women customers and that I should start eating.

Me: So how many days, your hunger strike?

Jabeena: Oh! Just one night and one morning.

She said that with a laugh.

There are still women-driver jokes floating around. Still. Jabeena was a great driver. In the crazy Bangalore traffic, she kept her cool, she took calls only when there was a traffic jam and swerved the car in the choc-o-bloc roads of Bangalore like a pro. She had been driving only for three months!

At this day and age also, there are discussions and articles written on topics where women are described as their own worst enemies. So in all earnest I told her I was thrilled to hear that her husband was a great support. She says, ‘Yes while that is true my biggest support has been my sister-in-law. She promised to look after my children while I go out and earn a livelihood. Without her I wouldn’t be driving.’

We chatted along the way, two women, two different professions, two different worlds. I realised how similar our challenges were – Traveling in local transport to managing a full-fledged mommy life at home while balancing work and other filial duties, gender discrimination and trying to be nonchalant about it, hoping that things will change. (I was also trying to sound nonchalant, while being completely fascinated). As we ended the drive I told her how inspired I was and grateful that I met her. I told her I write stories and showed her some samples. I asked her if I can write hers and a permission to take a photo. She agreed.

This brave, young woman gave me a different sort of power that day. Instead of going to my desk directly, like I normally do, I went to the café and sat down for sometime. Grit, determination, a will to go on. On and on, against all odds. I have read stories like these before but when you meet someone, it’s hard to not be touched by it and it’s a complete waste not to sit quietly for a bit, contemplate and be grateful for what you have and what you can do. To do what you can in your own capacity to pave way for a different, more inclusive, free world.

Jabeena is a symbol of the positive effects of the ‘sharing economy’ and how it has changed many lives in an optimistic way. #Liberating #Inspiring

Five myths about PR that need to be de-bunked

Leaders in a startup – It’s a different ball game