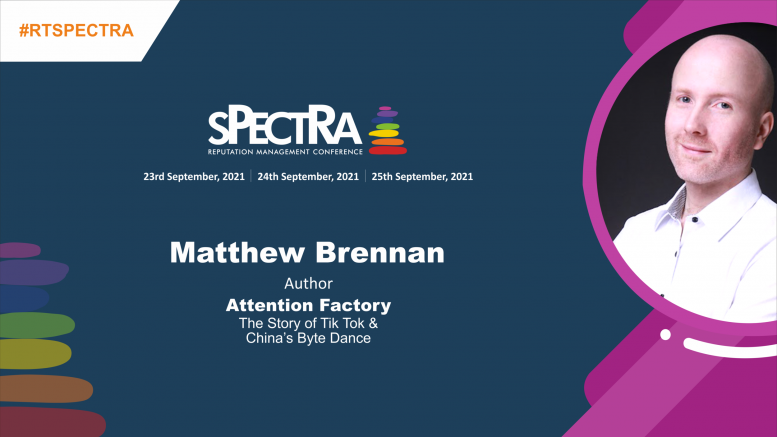 Why was Tik Tok so popular? Every few years, a new app reboots the way we use social media. After it burst into the scene, Tik Tok ruled the roost till it was banned from India. In 2021, TikTok the video-sharing social media platform is the current most popular app in the world. Matthew Brennan, Author of Attention Factory filled us with details of “The Story of Tik Tok & China’s Byte Dance”. As a speaker and writer, Matthew focuses on Chinese internet and tech innovation and he’s known for analysis of WeChat, China’s famous super app, and ByteDance, the parent company of TikTok.

In conversation with Matthew, Usha Iyer, Dr Reddy’s Laboratories wondered why are  many not aware of the history and science behind Tik Tok. The book gives us the answers  and asks – why Tik Tok?  Why Byte Dance and why short videos? It’s the story of Zero to One and why is it coming from China and not Silicon Valley? Who are the founders? Most people are not aware of these details, but one thing was loud and clear – that around the world, Tik Tok took the world by storm! And, the story continues to evolve.

How did the short video format meet with such universal appeal? 15- second clips (or less) is what Tik Tok is famous for, said Matthew. It fills up the screen and it’s immersive in the experience, which is mobile-centric vs YouTube which belongs to the desk-top era. The power of the short form is a fantastic match for empowering algorithms to discover your content preferences. Besides, the content itself is very “snackable” as he put it.

The app has spawned different celebrities and audiences and there’s a variety of content – messages of appeal, socially relevant messages, people bring in their own talent and there’s “noise” too, observed Usha. So, what about the quality of content? Matthew pointed out in the early days, the content was lipsync, followed by dance and after that, comedy skits; it was not “high-brow” but very accessible and loved by everyone. Tik Tok is called a music-driven content discovery. It is evolving and is a popular platform in China where you can expect serious news, news on nature, sports, education, doctors, dentists, lawyers, accountants and so on. “There’s actually an explosion of content. For education, it has a lot to offer,” he explained.

There’s something for everyone, so has it provided a level playing field, questioned Usha. We talk about lowering the barrier to content creation, as anyone can create a Tik Tok video, and in the early stages it was teenagers and kids, he clarified. So, users becoming creators is very high, compared to other platforms.

The rise and evolution of Tik Tok

The book traces the rise and evolution of Byte Dance and Tik Tok, but also makes us understand the social media networks, which is an educational insight. How was the whole journey? The founder is arguably, a famous entrepreneur one of the most powerful people in China, but the world knows nothing about hims; unlike Mark Zuckerberg, co-founder of Facebook who has global recognition, but the good news is that Byte Dance is catching up.

The founder of Tik Tok should be more “high-profile”, felt Matthew and the book was compiled to understand him better. Here’s a reality check. Zhang Yiming is a Chinese billionaire internet entrepreneur, who founded ByteDance in 2012 and developed the news aggregator Toutiao and the video sharing platform TikTok (Douyin), formerly known as Musical.ly. But he had a global vision for his product, with a localised content. “It is a very Chinese story – he is from a humble background, a geek but approached business in a bold and ambitious way,” according to Matthew. He became popular after Tik Tok took over the scene, so it is a juxtaposition between someone who looks timid, yet in the world of business, he has become aggressive; so the mixing of these two opposite angles in one person is highly interesting!

In fact, one of the criticisms that Chinese companies come in for is that they do well in China, but less well outside, illustrated Matthew. Another example is Tencent, which is a Chinese multinational technology conglomerate holding company. Founded in 1998, its subsidiaries globally market various Internet-related services and products, including in entertainment, artificial intelligence, and other technology; this company has done well in China, but not so well outside China. It’s a flagship company for WeChat. There are parallels in the Indian market, which is a very domestic market and highly competitive too, he said.

What was the science behind this? the content is so low-brow, but the science behind the platform is so advanced and complicated, which most people do not realise, and “that’s interesting”, commented Matthew. People are spending more time on Tik Tok than you can imagine! The power of this content format is undeniable and it is going to stay with us, was his parting shot.

Be the first to comment on "SPECTRA 2021: Attention Factory"

Every moment matters: Planning & learning from monitoring during a crisis