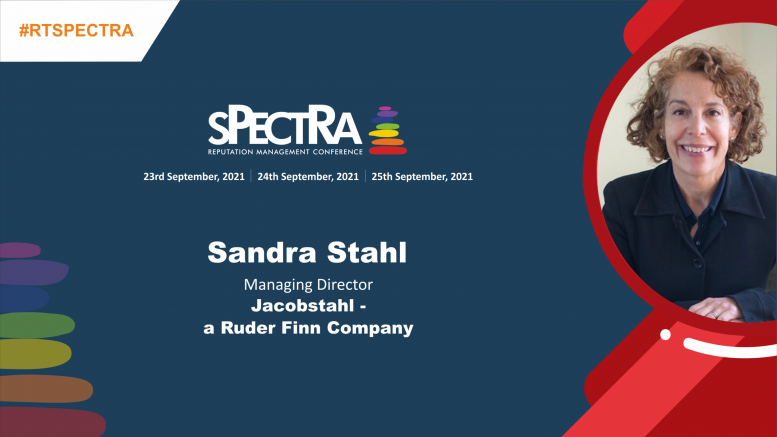 What can be done to regain brand trust when it has taken a hit?  Many brands have faced this challenge. There are many steps that can be taken, for dealing with a trust-damaging crisis, but there should also be an effort to change the conversation. “Leading with humanity: Rebuilding trust & connection” was discussed at length by Sandra Stahl, Managing Director, jacobstahl (a Ruder Finn company).

Leadership is examining itself now, how can leaders support their organizations and people. And currently, COVID has been a massive humanitarian challenge and next year will not be a return to business as normal, said Sandra as she tried to assess what remains constant?

What do people need from leaders now? They need bold moves, clear decisions, moral support, being prepared for whatever may come next and support in the face of uncertainty and above all, they need leaders they can trust to show up, she revealed. Stakeholders want to understand what leaders are thinking, they want to see more of their lives and most importantly, they need leaders with humanity who demonstrate empathy. “Empathy is not new. It’s a common element in the philosophy of good leadership and today, it’s a requirement for a leader to develop a high level of trust, care and culture of acceptance,” she reiterated. Plus a 2021 Businessolver study exposed that 84% of CEOs and 70% of employees believe that empathy drives better outcomes.

There are different expectations from people now. We have spent almost two years in the WFH mode at home, we have peeped into each other’s homes, and have had different experiences on Zoom.

Profile of an empathetic leader

What’s the profile of an emphatic leader for today’s times? It should be someone who transcends the podium of their position, is more than a name on the business card, demonstrates their own humanity and is a person of his or her word. Sandra shared some global leaders who have demonstrated empathy – Bill Clinton’s famous lip-biting when he wanted to convey concern, Dr. Albert Bourla, Pfizer’s CEO, who shared his story that he came from a family of Holocaust survivors and Barack Obama, who broke into a song when tragedy struck America, which was a clear demonstration of empathy.

“For me someone who inspires me is Steven Golin, who was an American film and television producer and the founder and CEO of Anonymous Content LLP, a multimedia development, production and talent management company and co-founder and CEO of Propaganda Films”, she admitted and added that Golin valued and practiced humanity in every step of his leadership in an illustrious career. Here are 5 core tenets, which are widely known as “The Golin Rules” – be real all the time, show yourself as someone who values talent, good ideas, your word is your most valued currency, always put your team first, and value humility. The famous maker of Spotlight, The Revenant, True Detective and many others – what was the result of his humanity? The Oscar-winning producer had many plus points – he had a loyal, ever-growing employee team; companies, studios and stars wanted to work with him; new talent wanted to grow with him, was a winner of top awards; he got ongoing positive coverage and got investment when he needed (got investors including Lawrence Jobs).

What role can communications play to help leaders find and display their humanity? She rolled out four steps – they should share their interests, hobbies; shift their vernacular, use social media and technology to bring out more of themselves and help them show up, basically. They can share personal stories or case studies like Pfizer CEO’ s past-inspired vaccine work, Goldman Sach’s CEO takes a subway, takes his own coffee and hustles as a DJ; or it can be articles like – 10 Things you didn’t know about Satya Nadella etc. For the vernacular, Sandra outlined some prominent ‘Ss’ – keep it Simple, Smart, Surprising, Stirring (of emotions), Social (brings in human connection) and Story-driven.

In the Q/A session Rasick Gowda, CISCO questioned if communicating a bold decision is a bigger challenge than making one? Sandra’s quick repartee was – “Yes and no”. Earlier we needed media. Now, we have full control for we have social media and the company website (eg Microsoft CEO puts up his speeches on the company website). Because we have control, we can be more effective.

Bringing in emotion to communication, and empathy is a key criteria to trust. What was her advice? Nothing should be fake, she said because it’s so transparent. Recovering is difficult. A PR person has to wear many hats and one is to take out what is special about the leader who is your client; as counsellor, tell them how to bring out their personality that reveals their humanity to the core. And, when we’re comprehensive on strategy, will you lose out on impact? Pick the message that makes sense, structure it, decide whose voice needs to be heard and stack it with the values of the company – was her clear-cut call to action.

Be the first to comment on "SPECTRA 2021: Leading with humanity: Rebuilding trust & connection"