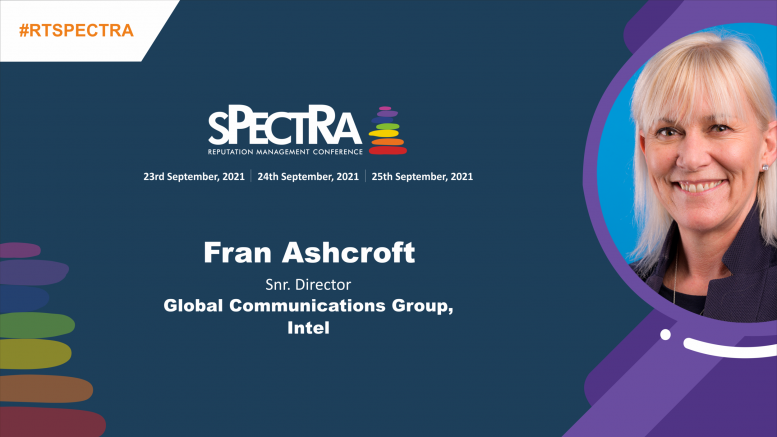 Communication is a central component of the core business of a Centre of Excellence, and it is critical that we need to communicate effectively with a variety of interested groups or stakeholders. Fran Ashcroft as a Senior Director of the Global Communications Group leads International teams across Europe, Middle East & African, Asia Pacific & Japan, China, Latin America and Canada. So, she put forth very rightly – “I believe everyone sets out to build a world-class communications programme; however, there are multiple factors that influence any company’s ability to design and build PR efforts that integrate and scale globally”.

Sharing the takeways she had from her rich journey, she pointed out that firstly, “make the brand and business equal partners”, which is one of the hardest, but the most essential element of global communications. And, it is easy for the pendulum to swing either way, driven by budget realities and the importance of driving sales success. Telling the complete story for the business to better connect with the customers is something that is recognised at Intel. And COVID gave them a good opportunity for creating a global impact of social responsibility efforts, with the creation of Intel’s Global Pandemic Response Technology Initiative. This was set up in March/April 2020 – investing $15 million around the world to combat COVID 19.

Secondly, it was the freedom to test and learn, which is part of a healthy exchange between peers, expanding region-wise, countrywise, including all stakeholders in between as well. “You can’t get most out of your communication investment without it,” she defined and added that at Intel, “we pride ourselves in empathy and sharing  learning, and also celebrating failure in order to learn!” They worked on their storytelling – scaling key storylines – co-creating locally, relevant angles around major moments and also connected their new CEO with the launch of “Intel Unleashed”. They managed to make it local, keeping the corporate umbrella consistent, across the world. They also developed a variety of influencers to bring these stories to life, to add to the overall narrative art, and it felt that the entire team came together to make this successful.

Another critical factor is to make data-backed decisions. If you are going to try new things and push for the possible vs just the probable, you need to decipher what that means from a business perspective and from a result-orientation perspective. Here, you need to make sure that you are grounded in data. Leading to her firm, genuine belief that prominently, “communication is both an art and a science”. But, most challenging was the lack of consistent data; in Japan they may use one platform and another in Germany. One of the biggest solutions was to standardise their global reporting and, “having a single source of truth has been a game-changer”. The statistics were mind-boggling. In July – August, they had 168 feature stories, 87% of coverage featured Intel executives, 49% featured local executives; there was 13% increase in the corporate narrative, 100% increase with at least one corporate message and 95% had multiple messages

“So we remain on a journey of learning and we remain grounded in out global strategy with clear objectives,” she explained and went to say that their day-to-day approach has increased their understanding of communication as a discipline. “In short we’re a competitive advantage to the business rather than just PR”.

In a conversation with Girish Huria, AvianWe she explained the key reason to create this Centre of Excellence (COE). Intel is at the centre of a comeback journey and communication is the external voice and it is also the main storytelling engine; and we needed to be represented globally, she pointed out. So, the Centre of Excellence is how it can be achieved. What were the challenges in creating the COE, asked Huria. The biggest challenge was – getting everyone aboard, removing silos and combating the HQ vs ‘the rest of the world’ mindset. The vision of COE was all about exclusivity and collaboration, every step of the way – was her finishing statement, as she signed off.

Be the first to comment on "SPECTRA 2021: Building a Global Communications Center of Excellence – Learning from the Process"

Hospitality businesses should be at the forefront of Public Relations