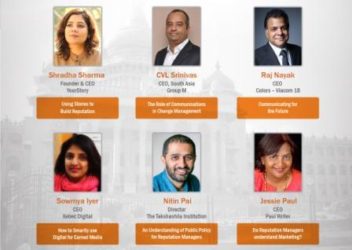 The annual conclave is back in Bangalore this week, after a successful first edition in the city last year. Interestingly, this year we have three of the six speakers travelling from Mumbai and Pune for the Conclave. These conclaves are a time for the communications community to come together for half-day of learning, sharing and meeting.

The conclave in Mumbai on April 5th was well received with six outstanding CEOs sharing their wisdom on Reputation and Communication at the stunning Godrej headquarters. We are all set for the Bangalore conclave this week.

We have Shradha Sharma of Your Story opening with her thoughts on Using Storytelling to Build Reputation. Shradha has built a successful media empire on the back of stories of start-ups. It will be interesting to hear her share insights on how she built a media portal that is the first stop of founders, investors and business enthusiasts in India.

The opening address is followed by two media stalwarts who are coming all the way from Mumbai, especially for the conclave. CVL Srinivas is considered the most powerful man in India when it comes to media investments. As the boss man of Group M he had access to the top marketers and their media plans. He will throw light on The Role of Communication in Change Management.

Thereafter, we have Raj Nayak of Colors who has built a general entertainment channel from scratch which is a leader in its segment. He will talk on the Future of Communications and Communicating for the Future. With close to half a million followers he knows a thing or two about communication. He has also built a team of rockstars who manage corporate communication.

We have a young CEO of a digital company who will talk about Smart ways to use Digital for Earned Media. Sowmya Iyer of Xebec Digital is flying all the way from Pune to share the insights she has gained over a decade. Don’t miss our equal emphasis on men and women speakers.

The final two speakers are well known Bangalore names in their domains. Nitin Pai of Takshashila will talk about Public Policy on how it impacts reputation managers. As the Founder of a think tank and public policy institute Nitin has built a formidable reputation as a go to analyst on governance issues.

Once the conclave is complete all focus is on the sixth edition of PRAXIS to be held in September in Jaipur. The conclaves are a good precursor to the annual jamboree.

Will niche PR firms drive the next phase of M&As?