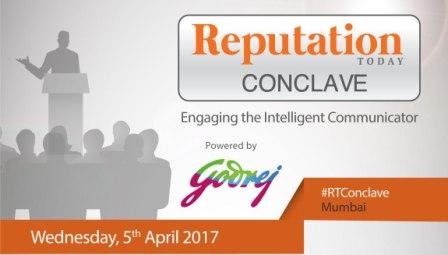 It is time for the annual summer conclaves under the aegis of Reputation Today. We started this initiative as an experiment in March 2015 in Mumbai called ENGAGE. Last year we took it to the two other metros of Bangalore and NCR and was a resounding success, not just in terms of the audience turn-out but in the level of engagement and discourse where corporate CEOs including the likes of Kiran Mazumdar Shaw of Biocon and Banmali Agrawala of GE opened the conclaves in their respective cities.

This year is no less. We have a dozen CEOs – an equal mix of women and men across Mumbai and Bangalore. We are also fortunate to offer everyone a unique experience of being at the classy Godrej headquarters in Vikhroli on the 5th of April.

The hosts will open the Conclave with Avani Davda, the Managing Director of Godrej Nature’s Basket delivering an address on Building Reputation using Word of Mouth. In her previous job as the first CEO of Tata-Starbucks India she helped launch a global brand in a price-conscious nation.

She is followed by a best-selling author and corporate leader, Mainak Dhar of General Mills who will talk about The Power of Marketing in Transforming Oneself. This comes from the man who sells Pilsbury, Nature Valley and Haagen Dasz to a billion.

Apurva Purohit is up next. She is the President of Jagran Prakashan, the parent company of Radio City and Dainik Jagran. She has also authored a book on which she will focus her talk – Adventures of a Woman at Work in Building a Reputation.

The second set of speakers includes ad-man Mahesh Chauhan who will talk about the Magic of Creativity in Building Reputation. He runs Salt Brand Solutions and check out his company website to get a taste of creativity.

Thereafter, we have two business leaders talking about very pertinent topics. One runs OPPI – the organisation that comprises the world’s leading pharmaceutical companies. Kanchana TK will talk about Pharma Communication in an Era of Increased Patient Engagement. This is certainly going to be an eye opener for those who seek to learn from and in healthcare communications.

And the final address is by Sandhya Vasudevan, someone who led the demonetisation onslaught from the front as the COO of Deutsche Bank Group. She will share her thoughts on Building a Formidable Reputation with Courage and Commitment.

I will write about the Bangalore Conclave in due course. We have an amazing line-up of speakers there as well including three who will fly in from Mumbai. Till then, keep learning, keep sharing and keep inspiring.