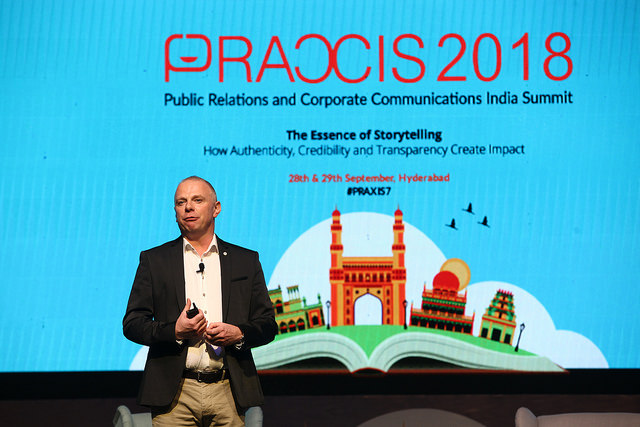 Opening his talk on a light note was Peter Brun, Chief Communications Officer, VFS Global  who spoke on – “Storytelling in the World of Travel & Tourism”. What does this chair and me have in common? The answer: they are both new to Hyderabad! Of course, he was referring to the IKEA brand that had recently been launched in the city of Nawabs. And, didn’t we get our first-hand experience of the brand as many among us visited the store, before we bid goodbye to the city?

You may think in travel and tourism, it’s so easy to get into storytelling…correct? Not exactly true, was his verdict. We have to think how we to tell a good story, he noted. We are bombarded by too much information everyday. 300 hours of video are uploaded every 60 seconds. Over 46 billion videos are uploaded daily. Over 46 million emails are sent out and 5000 marketing messages are sent out everyday. 51% of our working hours are just revolving around handling information. We scan newspapers, pictures 60 times faster than texts. What was revealed was that we all remember stories 20 times better than facts.

Pointing out that the power of words is immense, he travelled back in his career and recalled that he had the best job in the world, to promote Queensland in Australia. In travel and tourism, he stated that “we play with the dreams of the people”. There is storytelling in an Annual Report, which he felt was “a great vehicle to use for storytelling”. It’s storytelling that works and fuels the brand. It’s one of the main publications in Corporate Communications and nowadays, we can add an online version too, he suggested. He recalled how the Annual Reports he worked on in 2009, won many prizes. Plus there was a unique incident when they published an Annual Report as a newspaper, which was indeed a revolution, and this too won awards in 2011.

What is really outstanding is that ‘inspiration’ charges storytelling. He expressed the fact that we should use social media to inspire the audience citing the example on Bloggers’ Day, when they inspired the search for the ‘Perfect Sunset’.

At the VFS Global world, he shared his story:  “We struggled to explain to the analysts and financial journalists what this company does! We did this with fact sheets and other forms of explanation, but it did not work. So we created a story saying that the first step to a vacation is to get a visa….a decade later, VFS has become the world’s biggest visa application provider!” The idea, apparently was to capture them with the facts and figures wrapped in a story.

Basically, to create a story you have to – know your audience, and know your purpose. It is important that the essence of the story must be clear, the main characters, how it begins and ends. There can be loads of fantasy, which can help. Then, the next step is to choose your channels.  You can use technology, and highlight brand benefits.

The relevant guidelines he projected, followed one after another. Have a clear strategy – what, how, for whom, when and why. Identify your audience, which is very critical. Most significantly, he was clear that Communications and/or Marketing must lead it. Not every hype is suitable for storytelling, but what is important is that we must become more creative! Not everyone is creative, but you can excite it. ‘Going viral’ can’t be planned – it just happens!

Storytelling is the most effective way to get your point across. Here are some expert tips he shared, for doing it right. Take risks, but it takes courage to take risks. What’s interesting is that storytelling should be “clever and in style”. What was loud and clear was that – the future belongs to the best, creative storytellers!

Every industry is tapping into the millennial market, said Rashmi Soni, VP & Head – Corporate Communications, Vistara TATA SIA Airlines, as she got into a conversation with him. And when she questioned how is the millennial market different, pat came his answer – “They are very different, very demanding, so we have to communicate appropriately.”

In these days of fragmented marketing, what would be the best medium to amplify your story? At the end of the day, it’s a mix of everything. But what is the most important element? Peter’s parting shot was – “Authenticity. Be authentic, as we live in a world of fake news. Nowadays everything can be checked, and it comes back, like a boomerang!”

Be the first to comment on "The future belongs to the best, creative storytellers!"

Traits of a great spokesperson

How to use the social media feedback in enhancing brand image?