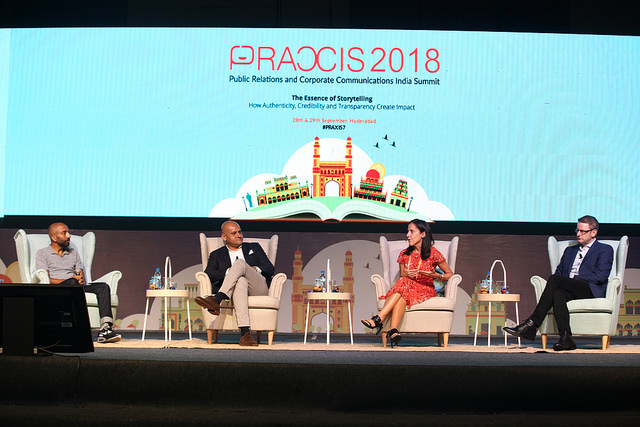 What does it take to develop effective, creative work, questioned Arun Sudhaman, CEO and editor-in-chief, The Holmes Report on Day 2 at PRAXIS7. The discussion, The Business of Storytelling in Asia, was about some great work, crafted by the panellists’ PR firms  – to demonstrate the importance of bravery and risk-taking in creating great work.

Whirlpool case study wanted to determine whether there is a connection between attendance and clean clothes. Initially hoping to impact attendance rates, what they didn’t realise was the actual impact the experiment would have – of how a washer and dryer can change lives, which would again lead to much more. The statistics were dismal. One out of five kids were not attending school as cleaning clothes was a huge problem, which affected their attendance rates. Whirlpool stepped into this world, moved the barrier and improved attendance.

Why is ‘courage’ important in storytelling?

The power of defining brands has shifted to audiences and this campaign displays that, pointed out Esty Pujadas, Partner/President, Ketchum APAC, MEA and LATAM. The best storytelling comes from extreme situations and at the centre of all this is data to support social causes, that is authentic and also ties back to what the brand is about. “Whirlpool is all about everyday care. This really supports what the brand wants to do out there, in a positive way”, she said.

Crockpot – a case study by Burson Cohn & Wolfe, highlighted a heart-rendering episode which showed a father turning off an old crockpot, which had burst into flames. This resulted in a fury against crockpots. In the news appeared headlines – “Crockpot under pressure”, “The Crockpot controversy”. But, instead of fighting fire with fire, they took a risky route. The brand showed there’s no difference that it could not overcome. The impact of the action plan was enormous.  Customised Crockpot deals were trending on Amazon. 3.7 billion impressions, 70,036 articles 796,600 social mentions and so on. All this lead to the result that – #CrockpotIsInnocent. And, Crockpot went from being enemy No 1 to pop culture hero!

“This was a big issue, a crisis and when it comes to crisis management, you don’t have time to plan,” explained Matt Stafford, President, Asia-Pacific, Burson Cohn & Wolfe. This was a case for compelling storytelling. You have a choice, you can react or go proactive. Turn it into an opportunity – that’s what the brand opted for. That’s an increasing trend – bravery in issues management, when storytelling gets proactive he pointed out.

The third case study – REI co-op #OptOutside focused on the Black Friday frenzy, America’s largest shopping day, when REI chose to do something unprecedented – they refused to open doors.  The news broke  in the media – with USA Today, CNN, NBC  etc flashing that an outdoor retailer closed its doors this year, and won’t process any sales! They had an announcement for their 12,000 employees, (and an employee exclaimed that he hasn’t had a Black Friday off in 27 years!!) Tools were given to people to go outside and spread the word. This led to a spurt in activity. Social media mentions increased by 200% and so on. And, then the movement took a course of its own. They invited everyone to join outside and it was reported in the news that more retailers have joined in. And, the impact? Over 170 organisations followed REI’s social lead. Most importantly, REI #OptOutside received 7 billion social impressions; 6.7 million media impressions and REI inspired over 1.4 billion people to #OptOutside.

The fact that REI had the courage to take off on the biggest sales day, actually made people want to participate. “It’s a brand living out its purpose!” said Rupen Desai, Vice Chairman, Asia Pacific, Middle East & Africa.

What is the significant element of risk-taking, how well was the industry getting to that point when companies are taking these risks, when it comes to storytelling? Matt felt you need to cut through the noise, that was when you can grab the attention.

And what are the risks of inaction? Even though the brand Crockpot got bad brand reputation that got into the front pages, the risk campaign managed to improve its reputation. Etsy pointed out that we live in an “experience economy” and it is important for the audience to understand what the brand stood for. And today, the new generation does not care where content comes from, but what the content does in terms of engaging their emotions and making them feel they need to engage with the brand. Companies not doing this are risking the fact that bravery really creates communities around and active participation with the brand. Today, people do not just purchase the product, but they want to engage with the brand. The internal audience wants to engage with the external audiences. It’s not about should a brand take that risk or what are you losing, by not taking that risk!

How comfortable is PR taking risks comfortably in delivering effective work, asked Arun. To this “the recovering ad man, who is now in the PR industry” – Rupen said that in today’s reality, risk is not an option. Consumers are playing tender with the brand and the fight is now for attention and trust. PR consultancies have been doing that for generations.

This makes brands visible in taking a stand on issues. Matt put forth the fact that there is a growing expectation on brands to have a stand on issues, which has been thrown up in research too. It’s important to use data, as Etsy elaborated. At the end of the day, you have to  not only have a purpose, but you should be able as a brand, to show you can contribute. Data can help you understand what you should take a stand on; and data will tell you how to deliver the content in a format that people could consume it!

PR has never been more relevant in the risk economy. And about creativity developing in PR, Ruben referred to pin balling, saying “My view of creativity in the PR world is much more like pin balling, where consumers, multiple shareholders join in and all you have to do is to make sure that the ball is in play!” This creativity has a different form of recognition, and therefore he stressed on the need “to strive to make effectiveness the recognition of our creativity”.