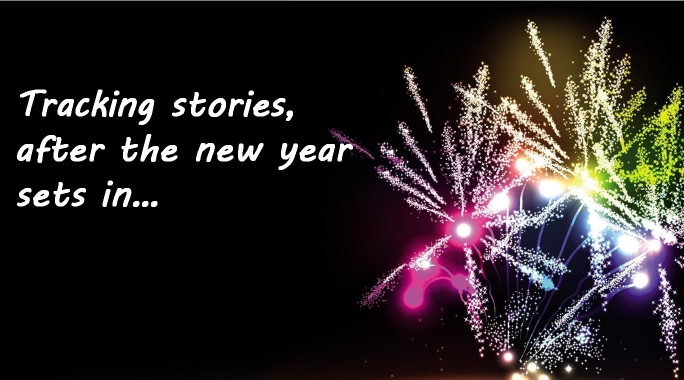 Every New Year brings in its own unique storyline. First, as 2017 was tapering to an end, there was the breaking news about the Tamil superstar Rajnikanth stepping into the world of politics. The Big Story #RajiniForTamilNadu  had not only Tamil Nadu engrossed, but it had the whole nation engaged. Confirming his entry into politics, he took a vow to deliver ‘spiritual politics’. The nation debated: can he translate his immense popularity to electoral success? What will Rajini’s X factor do for Tamil Nadu? Will it spice up state politics?

Then, on the first day of 2018, the capital city woke up to the dense fog, the worst of the season so far, that shrouded the city with visibility dropping to abysmal levels. Pollution just does not seem to be making an exit.

Meanwhile, we learnt that underneath flyovers in the city, there is an interesting churning happening – to engage Dilli-ites like never before. Beneath the Nehru Place flyover, the surroundings were turned into a park-like ambience – to woo anyone looking for some recreation. It has been beautified with green shrubs, grass and sculptures. Plus, musical instruments like the conga, babel drum and cadenza are kept there for any passersby to try out. Brand Dilli is getting a makeover…

Brands carried on their engaging tactics. We got caught up with Coca Cola as it rolled out the first campaign for caffeinated beverage Thums Up Charged. The ad that splashed across leading dailies featured Bollywood actor Ranveer Singh as a formula one racer. The new campaign –#TakeCharge, was for Charge, a caffeinated drink and first-ever brand extension of the brand. And, in true “taste the thunder” style, it is laced with the signature dare-devilry associated with the brand.

The video had us spellbound. We tracked him as he was about to set a world record, by winning the race for the seventh time, but there was a twist in the tale – for a car crash almost killed his dream. Fortunately, defying all odds, he chose to not give up and eventually ends up winning the race! Of course, the new campaign builds on the brand’s unique expression of the belief that heroism is a choice – it’s upto us to make or break an opportunity.

If you’d remember, I had mentioned Sophia earlier, the first life-like robot to be given citizenship. She made an appearance in our country. Draped in a sari, the world’s first robot citizen made her India debut at IIT Bombay, during its cultural extravaganza, TechFest. Using AI (artificial intelligence), Sophia is modelled on Hollywood actress Audrey Hepburn, and she imitates human gestures and facial expressions, and is able to converse on predefined topics. So, the  humanoid robot had a 15-minute conversation with a student in front of a large audience on topics ranging from artificial intelligence to the issues facing the world.  However, there was a problem….after answering a few initial questions, Sophia went mum – due to an unexplained technical snag! She slowed down, but was back in action soon, after the glitch was fixed.

The presence of Sophia had created a buzz among students and technology enthusiasts. Dismissing concerns of a robotic takeover of the world, Sophia said, “Robots should be helping humans. Artificial Intelligence may be the key to a peaceful civilization.”
Meanwhile across the globe, a new story was getting written. Chinese women are breaking the norm and getting inked as they cast away stigmas. Tattoos are becoming cool here.

For centuries tattoos have been stigmatised in China, and once they were the mark of criminals or sex workers. But, the heightened influence of celebrity culture is changing all that – particularly for women. In socially conservative China, body art for women had long been frowned upon, but it seems studios are mushrooming fast. Nowhere is the trend more evident than in Shanghai, China’s most cosmopolitan city, which was recently dubbed “China’s tattoo mecca” by the country’s state media. Taking a page out of a celebrity’s or sports star’s book, huge numbers of the younger Chinese generation, are reported to be getting inked. So, you have a new breed of young women, feeling ‘tattooed and proud’!

Be the first to comment on "A new year kicks off, spinning many stories…"

Importance of Trust in Communication Strategy