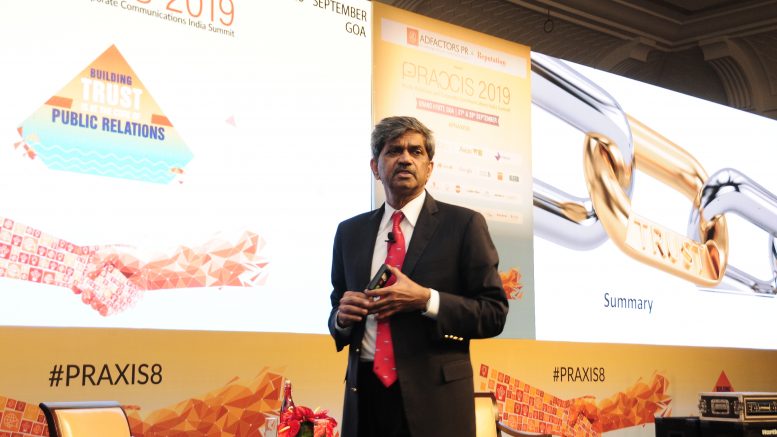 It was indeed, ‘showtime’ as #PRAXIS8 got into the act on September 27. Set in Grand Hyatt, Goa, overlooking Bambolim Bay, one felt it actually redefined the ideal tourism destination. For sure, it promised to add a trail of excitement to the knowledge-sharing and interaction that followed, for the gathering of PR and Corpcom professionals.

Shiv Shivakumar, Group Executive President, Corporate Strategy & Business Development, Aditya Birla Group set the tone of what was to reign supreme, in the two-day event, as he spoke on Building Trust in an Untrusting World.

Looking at the ‘trust deficit’ issue today, we see how it has hit brands. Trust deficit is often forcing brands down the untrodden path, to seriously look at solutions, so that revival or rather survival sets in.

Starting off with the revelation that most people don’t have trust today, he pointed out that once gone, you cannot get it back. It takes ages to rebuild, he added. Interestingly, trust can be seen at three levels – the individual, brand and company. In the business world, trust is the essence of all relationships and it’s extremely qualitative. It is like a glue – “We do our best work when the boss trusts us,” he shared. In fact, as employees, we thrive on it and we cling to it, thinking that we don’t want to let our bosses down.

In the rhythmic flow of language that forms the basis of all communication, we can see that there are a number of words we associate with ‘trust’ like –  faith, reliable, commitment, responsibility, confidence, assurance, benefit, conviction.

Building trust for brand has never been more critical than it is today. In an environment, where customer expectations are sky-high, ‘trust’ is all the more a vital factor. And, in a world rattled by  stiff competition, ‘trust’ can be seen as a brand differentiator that can make or break the business.

Trust is the feeling that you won’t hurt me when I am vulnerable’ and we are often safe with the thought that –  ‘I trust someone like me’. Brand trust has emerged as a factor that is more important than ever, because today’s consumers are bombarded with a host of options. Plus, remember that customer is ‘king’.

In PR, the brand should give the feeling that “people like us should talk to us”. Citing the example of Pepsico’s Tropicana when it developed a problem, which got solved with a well-planned communication initiative that had mothers talking to the consumers. This actually made the message more valuable, worthy, more believable – leading the consumers to get totally convinced.

But, all is not well with the winding path that trust follows. ‘Untrust’ does rear its complicated head. Why is the world ‘untrusting’ today? As he questioned this, he presented a number of reasons such as – poor leadership, doing the wrong thing, rapid change and inability to cope with it, fake news, greed (pay inequality, nothing permanent, litigation and the feeling ‘noone is bothered about me’.

In a world where what you perceive is top-of-mind, “perceptions matter,” he emphasised. Trust is directly related to the perception of a brand. Like, what is the perception people generally have. Which city do women trust to be safe? Is it Delhi or Kolkata? Which leader would you trust? Which colleague would you trust? It depends on what feelings they generate in people. Everything you do, adds to trust and everything you don’t do, takes away trust. This made things look as easy as the “Elementary Mr Watson” phrase that presented simple, immediate solutions in Sherlock’s world.

At work, you trust leaders who conform to the acronym AIM, he explained. ‘A’ stands for authentic not arrogant, ‘I’ for institution builder, not someone who is individualistic and ‘M’ indicates motivational not malicious.

Trust at a brand level

At a brand level, what is trust? Only 33% of consumers say they trust the brand they use, he said. This is a double-edged sword. It is “problem as well as an opportunity”. It is indeed a challenge, that we need to step up to.

A very good example is brand Nokia, which had a brand journey as ‘most trusted’ as per the ranking it enjoyed. In 2004 it ranked 71, in  2005 it rose to 44, in 2006 it shot up to No 4 and then in three consecutive years 2007- 2010 it zipped to rank 1. But then, the brand was struck by the battery crisis and it brought out a product advisory, after which “all hell broke lose”! He narrated the story that followed that propelled the brand to recovery, majorly propped up by the act of using Shah Rukh Khan as brand ambassador.

Trust at a company level

Most trusted entities are NGOs today. It is the purpose that matters and NGOs are committed to bring about a change in social attitude, so what follows as a natural consequence is that they get to be most trusted. They volunteer for a cause, and ‘selflessness’ is involved, which attracts higher levels of trust.

What exactly are the ingredients of trust in a company? Is it character of leaders or adherence to policies? Are exceptions truly exceptions or the rule? What are the rewards and how are they distributed? All companies put together a “promotion list” and how is that generated? How of trust comes in, when a company handles customers? Does the concept of “inclusion” that has become a buzzword today, add a layer of trust and if so, how much?

In the recent past, he stressed the point that many companies as such, have been challenged on “trust” factor.  Facebook, Uber, Amazon are some relevant examples. This clearly exhibits the fact that everytime, a company loses trust, you lose ‘value’ and you have to fight tooth and nail to reclaim it.

So, which companies can attract your trust? Is it Anglo Dutch companies, or Finnish or American? Which MNCs would you trust today?
Finally, he brought in Public Relations. “As PR leaders SPIN is a SIN,” he noted and suggested it’s important to “ Tell the truth” – always.  Ideally, in PR the clear objective should be – don’t dribble in information. “All leaders are not good spokespersons”, he said and concluded that “Media has a job to do”.

You are the product – Part 2