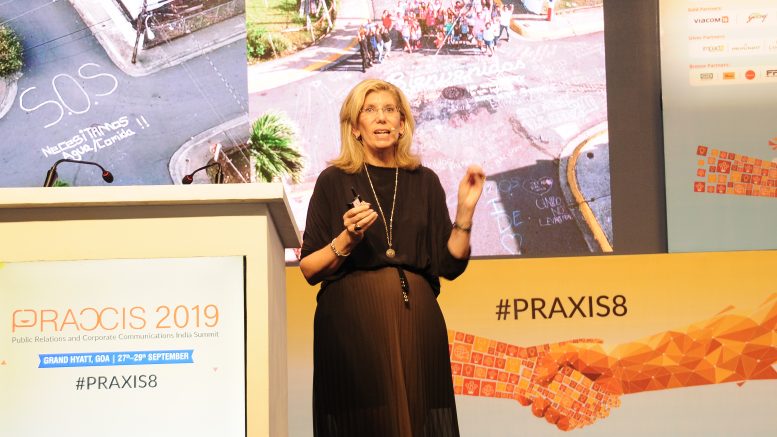 In her Keynote address: Evidence based Creativity: trust in a Left/Right Brain World, Barri Rafferty, Partner, President & CEO, Ketchum pointed out that “the business is changing” and now, it is interesting how “trust is critical to what we do”. And we, as communicators must be able to evolve meaningful relationships and deliver communication to get good results.

How difficult is it creating trust in a left/right brain world?

Our world is changing dramatically and audience targeting has indeed evolved. Talking about the left and right side to the brain – the right brain/left brain paradigm, it is significant that the right side worked on data and the left side focuses on creativity. In fact, brain anatomy is very interesting with marked differences between the right and left side. The latest data as of 2019, highlights the fact that in a single minute, 118 mails are sent, and 41 million web messages are exchanged. We live in a multi-dimensional world – a multi-screen, multi-channel, multi-influence e-commerce space. “We’re competing for attention, every minute, every day!” she exclaimed, which props up the question: how do we engage such an audience? And, with this heavy exchange of information,  interestingly, humans have a 7 second attention span, which is less than that of a goldfish!

So, to get the attention of people, we need to make use of the combo of left and right brain, by using analytics – like Ketchum did when they educated the people on peanut butter allergies.

Visual content is very strong, she insisted saying that it can convey the message to the TG. “Creativity: show, not tell” – this is specially seen today, as visual storytelling is proving to be much stronger than words. She went on to discuss some of their campaigns. Like Discover Puerto Rico – #CoverTheProgress, which was carried out after hurricane Maria, when their team used visual storytelling, to increase tourism in the island, showing the world that “Puerto Rico is on top of the game! This led to tourism getting hiked by 123%. So, leading ideas can come from communication, she said, as it was with Puerto Rico, when The New York Times mentioned it is the No 1 place to visit.

The right “influencer mix” can lead to huge growth. “We’ve always done influencer relationships” she shared, and the difference today is technology, and people are using AI technology to identify micro influencers for all kinds of topics. Another case study of Ketchum’s she narrated was for Jameson Irish Whisky, as she revealed what they did to increase its use. They tapped bartenders to get into the local music scene and created a national stage for music bands. Then for Livat brand, which was struggling in many ways, they devised a pop-up little pony that was set up in malls, which increased number of visitors and toy sales shot 123%, and women’s fashion grew 118%. “We had Mom influencers driving the traffic, which ultimately increased sales,” she disclosed.

The power of purpose is important, with the left-right brain in action. How you engage, how people feel about the brand is critical. And, thus the purpose can be really rewarding.

“We also believe that the CCO can be the conscience of the company,” she said firmly. Finally the key takeaways were – what this means for you, how you build your craft and skills. For her, this is the “most exciting time, because our value is increasing”. Her concluding tip was – “embrace the idea of thinking differently”. 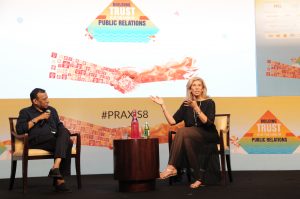 In a conversation with Anant Rangaswami, Senior Editor, she emphasised the importance of being digital savvy, to become better storytellers. When he enquired how do you identify who is a good influencer, Barri specified that when we talk of ‘influencers’, we talk of reach and influence; and micro influencers have high relevance. Ultimately it’s about identifying who are they looking at, and then creating content that fits the brand.

Be the first to comment on "Evidence based Creativity: Trust in a Left/Right Brain World"

Face-to-face with fear, ego and family

In search of ‘Small Victories’

To tell a story without words, create ‘a sense of place’