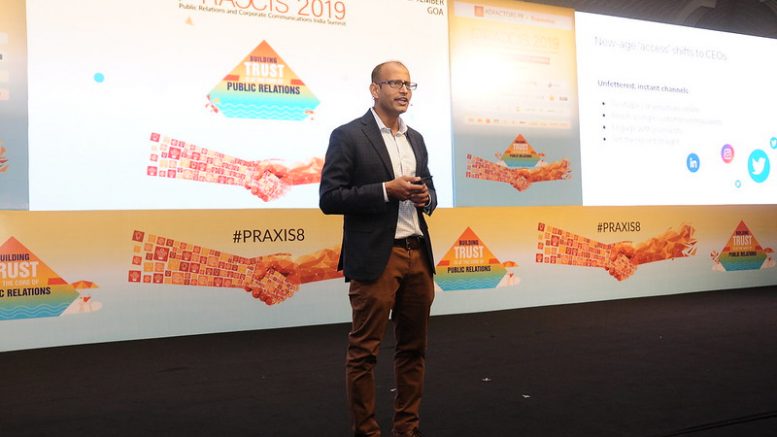 Trust is the very foundation on which corporate and institutions collaborate in many ways.  “The problem I see is that today, we are experiencing an unprecedented level of mistrust,” Arunav said, and went on to add – mistrust between companies, governments and regulators, companies and employees and companies and media at large, at a time when company profits are at an unprecedented level. Earlier corporates had no incentive to change, but that has started changing in the last 12 months. Today, companies are under huge pressure, to change the way businesses are done. “Äs we talk, the world is celebrating the downfall of the unicorn bubble with what was happening at WeWork,” he noted.

The comment from John Markoff, a New York Times reporter, reporting about The Homebrew Computer Club, which was founded in 1975 was revealing – “A wonderful thing about the Homebrew Computer Club is every computer company would come together. It was this random access period where people would share corporate secrets… It was the original culture of Silicon Valley.” At that time, reporters had access. A case in point is when Apple co-founder Steve Wozniak shared and gave a preview of what Apple was doing before it was launched. In the 80s and 90s there was positive coverage about “benign technology” and how it is going to change the world; but it started shifting in 2000 when conversations shifted to the ill effects of technology. The changing tone of tech reporting was visible. Tech coverage moved from ‘largely favorable’ in the 1980s and 1990s, to ‘pessimistic’ by the 2000s. There was a gradual shift seen from ‘advantages’ of technology to ‘ill effects’.

“Then it continued to what I call ‘The Age of News Mutation’,” he said, which happened because of digital publishing and distribution was disrupted by social media companies – both of which had a huge impact. The result of which The New York Times started running a campaign on why truth is important – the campaign for ‘factual, evidence-based reporting.’ What was seen were – the worsening news deluge, the impact of pressure of the ‘click’.  False news spreads much faster than the truth on Twitter. NYT is publishing 35% more than in 2010; this is happening at a time when newsrooms across America have declined by 25%. So, they are writing much more; one thirds of reporters are writing seven stories a week, when it used to be two or three stories a week. As a result, they are constantly in search of ‘sources’ and he observed that typically they are quoting at least ten sources in their stories, which is a problem as it leads to lack of diversity in voices – a fact that reporters around the world were concerned about.

This was happening at a time, when companies especially CEOs started thinking whether they needed to talk to reporters to reach out to their users. Some early adopters like Richard Branson, Satya Nadella and Elon Musk started changing the paradigm and started telling their own stories directly. This changed the fundamental role of corporate communication professionals who were considered gatekeepers of what stories needed to be told.

“Now you have a CEO, who is out there without much editorial control, reaching out to people directly,” he explained. Some of them did a great job, and some didn’t, but they started using it to share conversations online.  Some started sharing ideas about how to make the business better. Some examples were – Tim Cook sharing customer stories, Brian Chesky wanting to improve the business at Airbnb.

“Social media is good at destroying institutions and not necessarily creating them,” said Tom Friedman which reflects that “Twitter is a great place to tell the world what you’re thinking before you’ve had a chance to think about it.” But there’s a downside. So, now we have to think about what is the role communication professionals, when increasingly, CEOs are going out and talking? Remember, he said that “the most expensive tweet in the history of mankind was that one which cost $20 million”!! He was referring to Tesla’s Chief Excecutive and author of one of the world’s most expensive weed jokes, that got him sued by the Securities and Exchange Commission.

It puts into the spotlight, your own relationship with your CEO.  What kind of CCOs do you want to be? And what kind of CEOs do you want to work with? This is happening at a time when there is a huge amount of distrust has surfaced eg the Edelman Trust Barometer. So, it is causing people to think – what should I trust?

What’s accelerating the trust crash? Pointedly, he said that he attributes this trust deficit to four things:

Breakdown of relationships: For the first time, companies are realising that emotions are not noise of the human body. If you don’t live up to a certain code, consumers or employees can start penalising you for not living up to their expectations. In stakeholder relationships: Cracks deepen Some examples are –  #GoogleWalkout #LogOutFacebook #DeleteFacebook #SocialMediaStrike #hq2scam #NoToAmazon #DeleteUber.

Corporate hubris: You cannot have two realities, he said. What exists within the company is what people see outside; you have to have one story. This is having real impact for the first time, meaning changing the business for long time sustainability.

Media distrust: This is happening because increasingly media companies are owned by tech companies eg Washington Post is owned by Amazon, and likewise there are examples in India. This creates a lot of mistrust as to what to believe? This does not influence editorial minds but there is a genuine issue of how much control companies should have.

Rise of the personality cult: This is a major problem, when you have CEOs who are larger than life, which he said he experienced himself when he was in Yahoo. One of the key jobs of the CCO is to keep the company on the core narrative. What happens when you have your own CEO adored and idealised which can be a distraction?

And, what are the ways you can tackle this? 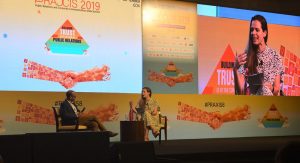 In a conversation with Lucy Harvey, H+K Strategies when she questioned him whether the real issue is how you make fundamental change in the culture, Arunav said that he tells CEOs – you do not have to tell a story better, but you have to make stories better!

When asked about what are the pros and cons to work with cult CEOs, he admitted it was difficult for they have a point of view. But for CCOs, right in the hiring process you need to sense how much space you can get from the CEO; if he is interested in improving the story, then he is the right CEO for you.

Finally he parted with some tips for any twenty year-old on how to become a communication leader. The boldness, irreverence of the young he found fascinating…continue that way, he said. Then, develop a world view. Also, develop the ability to write well, which is absolutely critical.